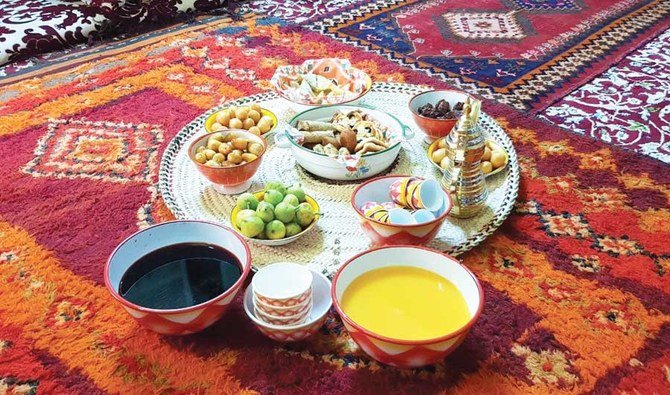 Across the desert sands of Najd and reaching the Red Sea coast, a Hijazi table might seem different, but the similarities in preferred dishes such as Sayadeya rice, lentil soup, and puffy samosas are often a staple of the Ramadan table

JEDDAH: Food is one of the most expressive ways people can represent their culture, and it also connects the people of Saudi Arabia and their different traditions.
You might wonder how Saudis in other regions break their fast. As far as tradition goes, many Muslims break their fast with dates. But different dishes are used to break iftar in various regions.
Although Saudis share the same firmly entrenched culture, they also all have our own regional experiences.
Arab News set out to learn about the different culinary experiences between the Kingdom’s two most similar regions during Ramadan.
The coastal regions of the Eastern Province and the western region — also known to Saudis as Sharqiya and Al-Hijaz — already have an abundance in common.
Both are home to two of the most cosmopolitan cities in the country. With a mix of different cultures, it is no surprise that both regions have similar seafood culinary traditions.

25-year-old Miriam Al-Mattar from Alkhobar told Arab News: “What we eat is actually very similar to the Hijazi region. If we have guests coming from Riyadh, for example, where they don’t have access to fresh seafood, we would have Sayadeya rice (rice cooked with caramelized onions and spices) and fish on the table during Ramadan.
“But if it’s just us as a family or with our neighbors, then we would have lentils soup, or harees with chicken and puffy samosas.”
Miriam explained that luqaimat or lokmas — deep fried round pastries dipped in honey or syrup — are paramount for a Ramadan meal in her region, so much so that most of the time it would be served on the table as a main meal during iftar rather than as a dessert.
Miriam’s mother touched on how Ramadan dining had changed due to the influence of Western culture in the Eastern Province.
“Now we have a lot of finger foods on the table,” said Um Miriam, such as “chicken quesadilla, pepper tortilla breads, and excessive amounts of sauces. It was not like this a long time ago.”

Miriam agreed with her mother’s observation that new dishes had started to be eaten during Ramadan, noting the rise of dynamite shrimp, fried seafood covered in a tangy spicy pink dressing.
Across the desert sands of Najd and reaching the Red Sea coast, a Hijazi table might seem different, but the similarities in preferred dishes such as Sayadeya rice, lentil soup, and puffy samosas are often a staple of the Ramadan table.
It would not be a surprise to discover a plate of puffy samosas half empty by the time it reaches the dining table in a Hijazi household.
However, there are a few differences between the two regions. Though residents of both regions have found finger foods dominating their tables, Hijazis were influenced more by neighboring Arab countries. Their culinary changes have arrived after historical waves of migrants settling in the area.
A staple dish found in most households is the mutabaq, a pan-fried, thin, square layer of folded bread stuffed with either meat and vegetables, cheese, or bananas. It can be enjoyed one small bite at a time.

“It’s an essential dish for most Hijazi families, in general and during Ramadan,” said 22-year-old Basma Abbas from Jeddah. “At almost every Ramadan gathering I’ve been to, there’s always mutabaq on the table. It’s probably my favorite dish. It’s so light and very easy to eat. There are other dishes that are essential too of course, like Bukhari rice or lentils soup or mantu, but I think mutabaq is unique to Hijaz.”
Abbas said that the main reason she prefers mutabaq is the choice of having it either sweet or savory.
Other finger foods can include falafel, fermoza (crispy baked dumplings stuffed with minced meat), aish bil-laham (minced meat pie with tahini) and one cannot forget the king of the table, foul mudammas — mashed fava beans — accompanied by different types of bread.
The king of the iftar table arrived in Hijaz from Egypt ages ago, during a time when pilgrims and settlers arrived in the region to be near to Makkah and Madinah.
The influx of foreigners settling in the area, mostly from neighboring Arab countries, arrived with some of the most colorful dishes to ever find their way onto tables.
Some kept their original recipes while others were developed with delicious new additions.

While a vast desert separates the two coastal regions, a love of food and the similarities between their tables have always kept their bonds close.