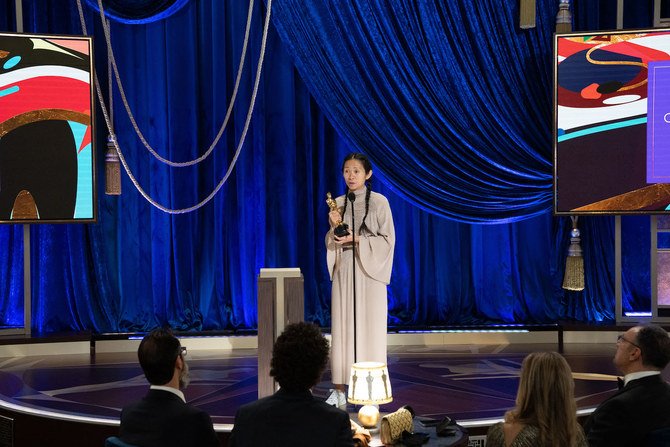 DUBAI: Film lovers across the Arab world set their alarms to catch the 93rd Academy Awards this morning — and they weren’t disappointed as shock wins and a glittering red carpet added some much needed glamour to 2021.

The lack of a host and audience did not deter Hollywood’s glitterati from putting on a show at Los Angeles’ Union Station — this year’s hub for a show usually broadcast from the Dolby Theatre. In contrast with the largely virtual Golden Globes, Zoom boxes have been closed out — though numerous international hubs and satellite feeds were connected for nominees who were unable to travel. Chloé Zhao made history at the 2021 Academy Awards for winning the Oscar for best director for “Nomadland,” becoming just the second woman and the first woman of color to win the award.

“My entire ‘Nomadland’ company, what a crazy, once-in-a-lifetime journey we’ve all been on together,” Zhao said. This was the only year in Oscar history with two female nominees, Zhao and “Promising Young Woman” director Emerald Fennell. Only seven women have ever been nominated.

The film also won the coveted Best Picture award in a culmination of its months-long tour of success on the international awards circuit. Director Thomas Vinterberg (L) dedicated part of his acceptance speech to his late daughter who died a couple of years ago. (AFP)

Meanwhile, Frances McDormand won the Best Actress prize for her role in “Nomadland” and Anthony Hopkins beat out British actor and the first-ever Muslim nominee in the category Riz Ahmed, among others, to take home the Best Actor trophy.

Danish film “Another Round” won the Best International Feature Oscar — director Thomas Vinterberg wiped away tears while dedicating part of his acceptance speech to his late daughter who died a couple of years ago. “Another Round” stars Mads Mikkelsen as one of a group of Danish school teachers. (AFP)

“We ended up making this movie for her, as her monument,” a tearful Vinterberg said from the stage at Union Station in Los Angeles on Sunday night.

The film stars Mads Mikkelsen as one of a group of Danish school teachers who attempted to stay slightly drunk all day to break out of their malaise and it edged out Tunisian nominee “The Man Who Sold His Skin,” directed by Kaouther Ben Hania. Another Arab nominee was narrowly edged out in the Best Live Action Short category, where Palestinian-British filmmaker Farah Nabulsi’s “The Present” was bested by “Two Distant Strangers” by Travon Free and Martin Desmond Roe.

The most ambitious award show held during the pandemic, the Oscars rolled out a red carpet and restored some glamour to the nearly century-old movie institution, but with a much transformed — and in some ways downsized — telecast. It was a year when, to paraphrase Norma Desmond, the pictures got smaller were overwhelmingly seen in the home, not in the big screen, during a pandemic year that forced theaters close and prompted radical change in Hollywood. Anthony Hopkins beat out British actor and the first-ever Muslim nominee Riz Ahmed, among others, to take home the Best Actor trophy. (AFP)

It was also perhaps the diverse Academy Awards ever, with more women and more actors of color nominated than ever before — and Sunday brought a litany of records and firsts across many categories, spanning everything from hairstyling to composing to acting. It was, some observers said, a sea change for an awards harshly criticized as “OscarsSoWhite” in recent years, leading the film academy to greatly expand membership. The ceremony — fashioned as a movie of its own and styled as a laidback party — kicked off with opening credits and a slinky Regina King entrance, as the camera followed the actress and “One Night in Miami” director in one take as she strode with an Oscar in hand into Los Angeles’ Union Station and onto the stage. Inside the transit hub (trains kept running), nominees sat at cozy, lamp-lit tables around an intimate amphitheater. Some moments — like Glenn Close getting down to “Da Butt” — were more relaxed, but the ceremony couldn’t just shake off the past 14 months.

“It has been quite a year and we are still smack dab in the middle of it,” King said.