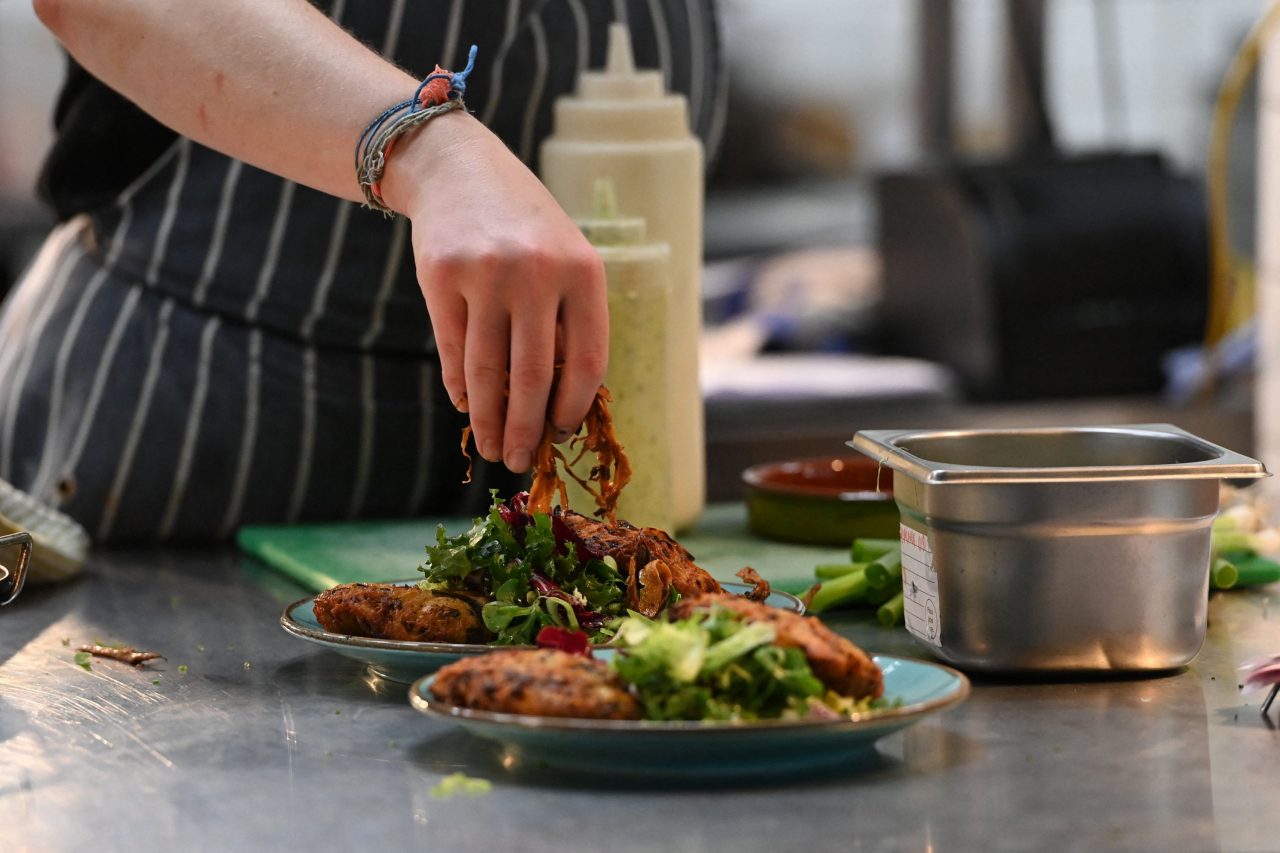 The menu at The Canteen in southwest England doesn’t just let diners know how much a dish costs. They can also check its carbon footprint. The carrot and beetroot pakoras with yogurt sauce are responsible for just 16 grams of carbon dioxide emissions. The aubergines with a miso and harissa sauce with tabbouleh and Zaatar toast caused 675 grams of carbon dioxide. As customers weigh their options, the menu at the vegetarian restaurant in Bristol includes a comparison with a dish it does not serve: The emissions from a United Kingdom-produced hamburger.

“Three kilograms for a burger, wow! I can’t believe it,” exclaimed Enyioma Anomelechi, a 37-year-old diner sipping a beer outside in the sunshine. The menu notes that a real beef burger’s emissions are “10 times the amount of its vegan alternative.”

The carbon footprints of businesses and consumers have come under growing scrutiny as countries scramble to limit global temperature increases to 1.5 degrees Celsius (2.7 degrees Fahrenheit) and to achieve net-zero emission by 2050.

The Canteen became the first restaurant to agree to put its carbon footprint on the menu in July under a campaign spearheaded by U.K. vegan campaigning charity Viva!

The restaurant’s manager, Liam Stock, called the move a way to “see what we are doing; to understand and improve ourselves.”

According to United Kingdom government figures, the average British person has an annual carbon footprint of more than 10 tons.

Britain has set the ambitious goal of reducing harmful emissions by 78% by 2035, compared with 1990 figures, in order to meet its international climate change commitments. Experts from the United Nations’ Intergovernmental Panel on Climate Change said that switching to a plant-based diet is one of the most effective ways for an individual to reduce their carbon footprint.

Whether diners let carbon footprints influence their order choices remains to be seen, but Stock said the menu innovation has stoked interest and support.

“In England, if you’re a big chain restaurant, it’s the law that you have to have calories on (the menu),” he said.

“But a lot of people are saying … they’re more interested in carbon.”

While Anomelechi noted the “huge” difference in emissions between a hamburger and other dishes, he said he did not necessarily want to be burdened with knowing his order’s calorie count or carbon footprint.

“When I go out to eat, I just want to enjoy,” he added, noting he would be more inclined to change his ways when grocery shopping.

“We are in a climate emergency and consumers have to be able to make informed choices,” said the activist. In her view, “most people would actually choose for the planet” if confronted with a comparison between the carbon footprint of a meat-based meal and a vegan dish.

Stock said he knew his restaurant’s dishes would score low carbon footprints, as most of his ingredients are sourced regionally.

“We didn’t have to change anything,” he said while admitting some surprises, such as learning that imported spices drive up emissions.

To calculate the dishes’ footprints, The Canteen sent its recipes and the source of the ingredients to a specialized company called MyEmissions.

It is able to calculate the carbon impact from “cradle to store,” taking into account farming, processing, transport and packaging.

“If I was choosing between two dishes, maybe depending on how hungry I was, I might choose the one with a lower footprint,” said Nathan Johnson, a 43-year-old diner at the restaurant.

That day, he opted for the chef’s salad, which racks up 162 grams of carbon.

Another diner, 29-year-old Emma Harvey, also backed the idea of increased awareness of carbon footprints “and the ethical effects of the food that we’re eating.”

“We have to incorporate things (like) that into everyday life,” she said.

nextEra of €10 plane tickets is over, says Ryanair boss O'Leary