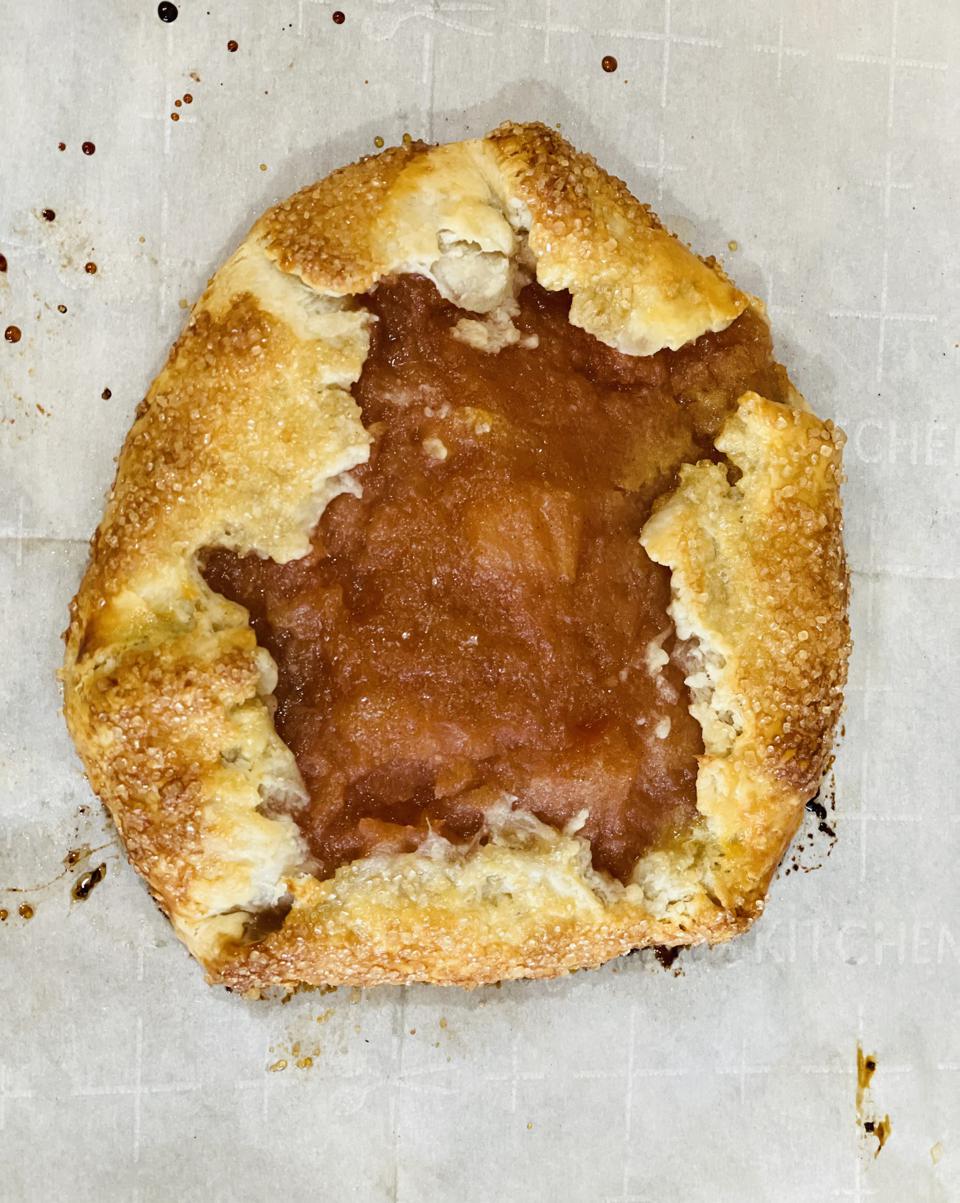 I have long cooked with booze.  It makes everything taste better and adds layers of flavor to foods from sweet to savory.

From my repertoire, there are dishes that I make over and over again.  One of them is a chunky applesauce that is spiked with Cognac and finished with a smidge of butter for richness. It is my version of the filling for a French apple tart that I learned from my mother who learned it from Julia Child. I’ve adapted the recipe so it is not too sweet for accompanying meats but sweet enough to use as a filling for desserts. I serve the applesauce with grilled pork tenderloin and ham, and use it as a filling in tarts and various apple pastries.  It never disappoints.

I hadn’t made it in quite a while, or even thought about it until I was doing a rum tasting with the charming and prolific Alexandre Gabriel. Alexandre is the owner and master blender of Plantation Rum as well as Ferrand Cognac, Citadelle gin, and Mathilde liqueurs.  As someone who loves all things bourbon, whisky, Cognac and tequila, I was woefully uneducated about Rum. Needless to say, Alexandre piqued my interest and I have added rum into my frequent rotation.

Plantation rum was founded in 1999 as a celebration to the heritage of rum and it’s rich culture.  It is distilled in the country of origin and aged in used bourbon barrels before being shipped to France.  Alexandre told me that “it is transported in the barrels and as the ship sails, the liquid is polished as the rum sloshes around.” That painted a romantic picture for me and I could hardly wait to taste this “polished” rum. But it’s not ready for tasting even after the ship’s crossing.

Once the rum reaches Maison Ferrand in southwest France, it is transferred from the bourbon barrels to used Ferrand Cognac barrels for a second aging. This second aging imparts a small amount of the spirit that was left in the Cognac barrels—about 3-5% according to Alexandre—into the rum.  That is enough to change the flavor profile slightly, adding an elegant and distinctive finish. He went on to tell me that “this double barrel aging is unusual in the rum category as today 99% of rum is aged once in used bourbon barrels.” All that to say that when I tasted the Plantation rum, I could taste the vibrancy of the islands but also the elegance of Cognac.  And the expression that I fell in love with was the non-vintage Isle of Fiji which is a value at under $25.00 a bottle. The double aging combined with the molasses from local Fijian sugar cane makes a rum with a depth of flavor that made me want to sip it neat. The notes of exotic fruits are present but are warmed like a caramelized tarte tartin and that is what gave me the idea to make my French-inspired applesauce for a simple galette, and use Isle of Fiji instead of Cognac to make the flavor rich and fuller.

My applesauce is mostly apples with a splash of lemon, a pinch of cinnamon, and a little bit of sugar to bring out the inherent flavors of the apples.  Once they cook down, you add the butter and the rum. I make the applesauce the day before and let it “marry” in the refrigerator overnight.  The applesauce filling has to be cool before you can add it to the pastry dough.

The first time I made it, I could not believe the difference in the smell alone.  One whiff of the mixture and you could almost taste the heady flavors of sweet cooked apple with both rosy notes of freshness and butterscotch-like depth.  It was good enough to eat alone, or be topped with ice cream for a quick dessert, but mine was destined to be wrapped in a buttery pie crust and made into a galette.

Galettes are hugely popular in the United States but the word also comes from the French, and refers to any flat, round pastry or cake-like creation. Today—in the U.S.—a galette is most often used to describe a rustic, free-form tart that is filled with fruit but could be filled with anything.  The advantage of a galette is that it is much easier to make than a pie or a tart, the bottom of the crust is nice and crisp once it is baked, and you can fill it with almost anything you like as long as it is cold.  (You can’t put a hot filling on top of cold raw pie dough.)

I made my favorite all-purpose butter pie dough and rolled it out somewhere between ¼ and 1/8th of an inch—not too thin because it has to hold the weight of the filling, and not too thick either.

The key is rolling the dough out on a piece of parchment paper that you can pick up and place in your sheet pan. That way, you won’t tear your galette in the transferring process.

Roll the dough in a circular shape and make it larger than you think you need. My galettes all tend to be slightly rectangular so don’t worry if it’s not a perfect circle. I arrange the filling in the middle of the dough in a circle of about 6-inches, depending on the shape of my dough.  You want at least a 2-inch margin around the filling because you will be folding the sides up to hold in the filling.  Working from one side to the other, fold each section separately. You may need to “pleat” the dough to turn it into a circle.  The sides and the ragged edges is the beauty of the galette. This recipe looks like a lot, but once all the parts are made, it is very simple to assemble.  After the first time you make it, you will hardly need the recipe.

This recipe makes 2 apple gallettes that you can cut into four pieces.  If you only want to make one, you can cut the recipe in half.

This filling will need to be cooked and cooled before using as the filling. Cook the apples with the lid on until they are tender but still irregular in shape and a bit chunky. I used the Lucy Rose apple variety and the pinkish flesh resulted in a rich rosy colored applesauce.

Juice and zest of 1 lemon (about ¼ cup juice)

This recipe is almost foolproof, is flaky and bakes up beautifully.  Don’t be afraid to use your hands to make the pie dough, it makes it much easier.

This will make your pastry brown beautifully and hold the sugar in place.

Make filling: Make the filling at least 4 hours before you want to make the galettes.

Peel, core and quarter the apples.   Place in a heavy-bottomed Dutch oven or saucepan.  Sprinkle sugar, salt, lemon juice and zest and cinnamon on top of apples.  Toss gently.  Put the lid on the pot and begin cooking over low-medium heat.  Stir apples about every 5 minutes until they begin to release their juices and start to break down, about 15-20 minutes. If you keep the lid on the pot, you will not need to add any water, the apples will make their own liquid. Continue to cook until tender.  Taste. If the apples are too tart for your taste, add more sugar.  I personally don’t use very much sugar, just enough to pull out the flavor of the apples.

Add butter and rum.  Stir well to combine and until the apples are the texture of a rough applesauce.  You want it to be chunky.  Simmer for 5 minutes.  Taste.  Adjust seasonings if necessary, and let come to room temperature.  Refrigerate until cold.

Make crust: Fill a cup halfway with ice and add water to cover ice.  Set aside. Mix flour, sugar and salt with a fork or a whisk.  Cut butter into ½-inch squares and add to flour mixture.  Cut into flour with a pastry cutter or using your hands, smush the butter and flour together.  Mix until butter is pea sized, scraping the bowl often.

Add vinegar and 1 tablespoon ice water and mix lightly with a fork to combine.  Add more ice water as needed until the dough is combined in the center and the sides are still a little crumbly. Don’t be tempted to add too much water. I generally need to add 3-4 tablespoons.  It will hydrate as it rests. Take out of bowl and knead a couple of times to incorporate any dry bits and then form into two round discs of equal size.  Cover with plastic wrap and refrigerate 2-4 hours or overnight. Note: This dough can be made up to 5 days ahead, tightly wrapped, and stored in the refrigerator; or frozen tightly wrapped in a resealable plastic bag for a month.

Assemble galette:  Preheat the oven to 400°F. Roll out the dough a piece of floured parchment paper that will fit into a half sheet pan—about 12 x 16 inches.  This will make it easier to transfer to a sheet pan.  Roll out the dough to about 14-inches in diameter.  You will have places that are much shorter and you can cut pieces of dough from the longer sides and patch the dough until it is round-ish. Spoon about 2 cups of the filling in the middle, leaving a border of 2-3 inches around the filling.  Fold the dough up and over the filling, pleating where necessary. The charm of a galette is the rustic shape.

To finish:  Beat egg and water and brush it over the crust. Let the egg wash seep under the pleats and press down to secure.  Sprinkle all over with Sugar in the Raw (turbinado sugar) or sanding sugar.

Bake galette:  Bake for 30 to 35 minutes, or golden all over.  If the color isn’t brown enough, bake 5 more minutes.  Cool for at least an hour uncovered on the sheet pan set on a wire rack. Do not remove the galette until it is cool, or it may break. Serve warm or at room temperature with ice cream or whipped cream if desired.

previousWant To Buy A Superyacht Using Cryptocurrency? This Company Claims To Have The Solution