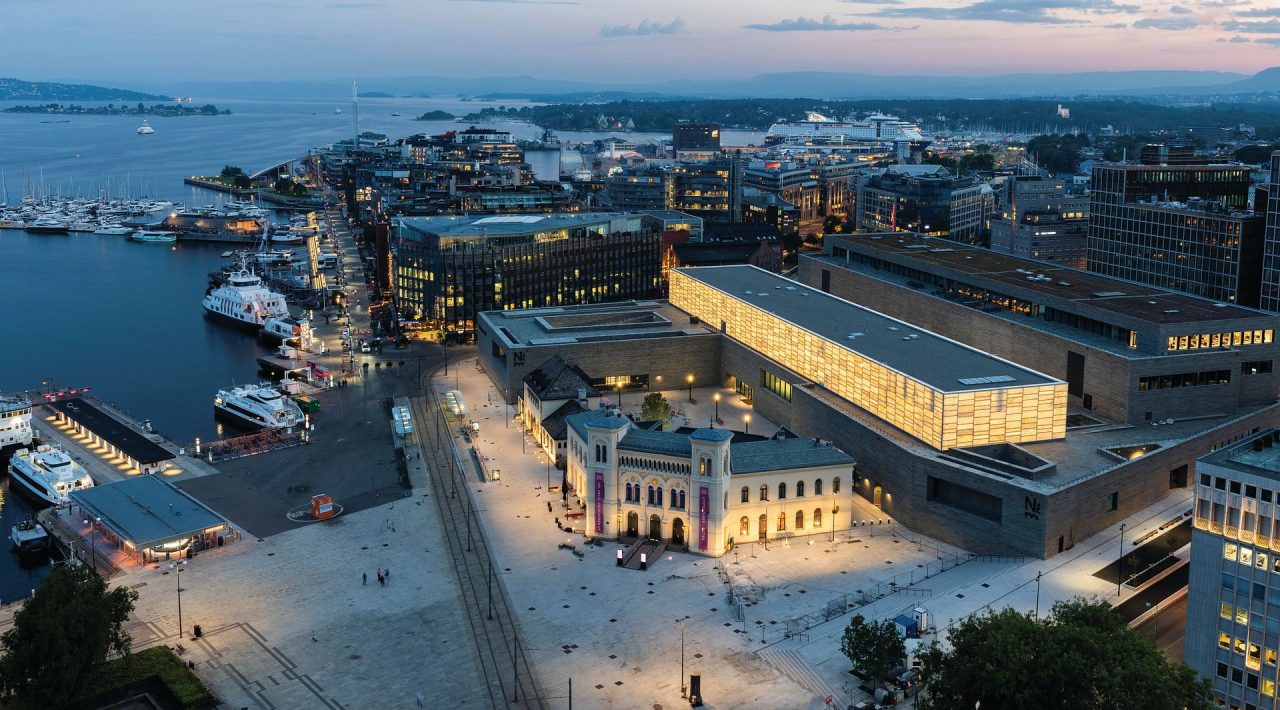 While the pandemic may have forced museums around the world into an involuntary temporary slumber, builders have been busy. Here are the most exciting new and expanded museums opening in 2022. Norway’s new Nasjonalmuseet has a prime fjordside location in the centre of OsloPhoto: Borre Hostland; courtesy of the museum

Norway’s new Nasjonalmuseet is mammoth on every level, from its size to its budget. The biggest museum in the Nordic region brings the collections of three major Norwegian institutions—the National Gallery, the Museum of Contemporary Art and the Museum of Decorative Arts and Design—under one roof. The new building designed by the German architects Kleihues + Schuwerk cost NoK6.1bn ($670m) and is entirely state-funded.

More than 5,000 works, dating from antiquity to today, will go on show in a permanent collection display of more than 80 rooms and two floors. Important pieces housed at the new museum include Edvard Munch’s The Scream (1893); a self-portrait painted by Vincent van Gogh at the asylum in Saint-Rémy-de-Provence in 1889; and Harald Sohlberg’s Winter Night in the Mountains (1914), which has been voted Norway’s national painting.

The Light Hall, an illuminated 2,400 sq. m rooftop space for temporary exhibitions, is a stand-out feature of the new building. Its opening show will be dedicated to Norwegian contemporary art, featuring more than 150 artists and artist collectives.

The Nasjonalmuseet is part of the FutureBuilt programme that aims to develop carbon-neutral urban areas in Norway. According to a project statement, the museum has “high environmental ambitions” and is designed to reduce greenhouse gas emissions by at least 50% while a heat pump utilising sea water will be used for cooling. The entire façade is covered in Norwegian slate. The Grand Egyptian Museum in GizaKhaled Desouki/AFP via Getty Images

The Grand Egyptian Museum (GEM) is finally nearing completion and is expected to open in November—20 years after the country’s late president Hosni Mubarak laid its foundation stone. The cost of the new museum, designed by the Dublin-based architects Heneghan Peng, is thought to be more than $1bn. Much of the funding has come from Japanese government loans.

At nearly 500,000 sq. m, the GEM is the size of a major airport terminal. The sprawling site near the pyramids of Giza will be home to 100,000 Egyptian artefacts, displayed in chronological sequence from prehistory to the Greco-Roman period. Among the largest objects are an 11m-high, 75-tonne red granite statue of Ramses the Great in the atrium and a 45m-long wooden “solar boat” that was excavated in 1954 at the base of the Great Pyramid of Khufu. But for many visitors the biggest draw will be the collection of 5,000 relics from the tomb of Tutankhamun, transferred from the historic Egyptian Museum in central Cairo and displayed in its entirety for the first time.

Known as Sydney Modern, the expansion of the Art Gallery of New South Wales features an airy glass-fronted new building designed by the Tokyo-based architecture firm Sanaa above a pair of decommissioned Second World War oil tanks. This will connect to the existing neoclassical sandstone gallery via a public art garden that will be accessible 24 hours a day, with views overlooking Sydney Harbour. The design, featuring green roofs, solar panels and rainwater harvesting, has achieved Australia’s highest rating for environmentally sustainable buildings.

The transformation will create 16,000 sq. m of exhibition space, almost doubling the current footprint, and is expected to boost visitor numbers beyond two million a year. A full rehang of the collection will give works by Aboriginal and Torres Strait Islander artists pride of place in a dedicated space near the entrance and throughout the gallery displays. One of the old oil tanks will be repurposed as a cavernous underground gallery for special exhibitions and performances.

Sydney Modern is backed by A$244m ($175m) from the New South Wales state government and more than A$100m ($72m) in philanthropic support. The seven-year renovation of the Musée de Cluny in Paris, France’s national museum of the Middle Ages, is soon to be complete. The works have taken place in stages, starting with the restoration of a Gothic chapel and the ruins of ancient Gallo-Roman thermal baths in the grounds. In 2018 a new reception building designed by Bernard Desmoulin was unveiled, while the museum’s existing 15th-century townhouse and 19th-century annex buildings were made accessible to disabled visitors.

The final phase will overhaul the museum’s displays, which date back to the 1950s. A thematic approach will make way for a chronological arrangement. A new route will lead visitors from the Byzantine collections and the birth of Gothic art up to the 1500s, including the famous Lady and the Unicorn tapestries. Five of the tapestries represent the senses of touch, taste, smell, hearing and sight while the mysterious sixth is inscribed “To my only desire”.

Other key objects from the collection include stained-glass panels from the Sainte-Chapelle and 13th-century statues of the kings of Judah that were torn from the façade of Notre-Dame cathedral during the French Revolution and only recovered in 1977. After the long-awaited reveal last November of Hong Kong’s M+ museum, comes the neighbouring Palace Museum, devoted to China’s imperial treasures on loan from the Forbidden City in Beijing. The museum was announced by the Hong Kong government in December 2016, sparking controversy over the lack of prior public consultation. It is a late addition to the West Kowloon Cultural District, which stretches over 40 hectares of reclaimed land beside Victoria Harbour. The HK$3.5bn ($450m) capital project is fully funded by the Hong Kong Jockey Club Charities Trust.

Designed by the Hong Kong-based architect Rocco Yim, the building will have nine galleries spanning 7,800 sq. m, as well as a 400-seat theatre, educational spaces and nursery rooms. Around 800 artefacts from the Palace Museum in Beijing will make up the inaugural displays, including paintings, calligraphy, decorative arts objects and rare books. Other galleries will focus on the history of art collecting in Hong Kong and interactive experiences for children. In the first of a series of international partnerships, an exhibition on horses will juxtapose ancient Chinese art with works from the Musée du Louvre in Paris. Home to 9,000 works of art donated to the city of Glasgow by the shipping magnate William Burrell, the Burrell Collection will reopen in spring after more than five years of closure. Its namesake amassed a collection rich in Medieval and early Renaissance art from northern Europe, with stained glass, armour and more than 200 tapestries; Chinese ceramics, bronzes and jade; and 19th-century French art, including pastels, drawings and oils by Edgar Degas. The museum, set within the woodlands and gardens of Pollok Country Park, was opened by Queen Elizabeth II in 1983.

The architects John McAslan + Partners have led a major refurbishment of the listed 1970s building, creating 35% more gallery space and adding a new entrance and learning centre. The revamped building is also more environmentally sustainable, following repairs to the chronically leaking roof and the installation of new heating, ventilation and lighting systems. A full redisplay of Burrell’s collection promises works that have not been seen in decades and immersive, family-friendly exhibits designed to appeal to the under-fives.

Prague’s former Zenger Electricity Substation will open on 22 February as the Kunsthalle Praha, a non-profit exhibition space supported by the family foundation of Petr and Pavlína Pudil. The programme of Modern and contemporary Czech and international art begins with a show paying tribute to the 1930s building’s original function, Kinetismus: 100 Years of Art and Electricity.

The Plateforme 10 arts district in the Swiss city of Lausanne will be completed on 18 June with the opening of a new building housing the relocated Musée de l’Élysée, a leading photography museum, and the mudac, devoted to design and contemporary applied arts.

The Fotografiska chain of photography museums in Stockholm, New York and Tallinn is expanding to Berlin and Shanghai in the second half of 2022. Fotografiska Berlin renovates the Kunsthaus Tacheles, a former department store and Nazi party office that was saved from demolition in the 1990s by artist squatters. Fotografiska Shanghai takes over a former warehouse in the riverfront district of Suzhou Creek. Another new space is scheduled to open in Miami in 2023.

The new building of the Orange County Museum of Art in Costa Mesa, California, is due to open on 8 October with free admission for the next ten years, sponsored by Lugano Diamonds. Its inaugural shows will be the California Biennial 2022 and a career-spanning survey of the Light and Space sculptor Fred Eversley.

The Albright-Knox Art Gallery in Buffalo, New York, will reopen in late 2022 as the Buffalo AKG Art Museum after an $160m campus expansion designed by Shohei Shigematsu of OMA architects. New additions include the 2,800 sq. m Gundlach Building, an education wing and collection galleries dedicated to the works of Clyfford Still and Marisol.

Manchester Museum, part of the University of Manchester, will complete construction of its £13.5m extension in late 2022, unveiling a new exhibition hall and galleries for Chinese and South Asian culture. The latter is curated in partnership with the British Museum and members of the South Asian diaspora community.

Founded by the Indian businessman and collector Abhishek Poddar, the Museum of Art & Photography (MAP) will open in Bengaluru at the end of 2022. Its collection includes more than 18,000 works donated by Poddar, spanning paintings, photography, textiles, graphic art and sculptures from the tenth century to the present.

The Museum of Contemporary Art San Diego will reopen its La Jolla flagship gallery in April following a $105m renovation and expansion overseen by Selldorf Architects. The inaugural show is Niki de Saint Phalle in the 1960s, a survey of early works by the French-born artist who spent her final years in San Diego. Works by artists such as Vito Acconci, Stephen Antonakos, Jonathan Borofsky, and Nuncy Rubins will be dotted around an outdoor sculpture garden overlooking the Pacific Ocean. previousMHRA, “Survival of Air Malta is imperative for Tourism and Malta”