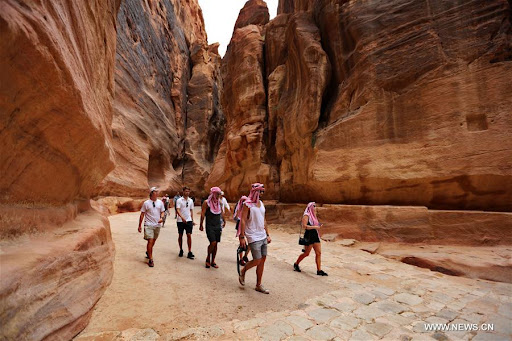 The tourism sector in Jordan has gradually started to show signs of a positive trend after a near collapse due to the coronavirus (COVID-19) pandemic, tourism officials said.

The Ministry of Tourism and Antiquities and the Jordan Tourism Board (JTB) began opening up to domestic tourism, and then to Gulf and neighboring countries, in order to facilitate border movement, Dr. Abed Al-Razzaq Arabiyat, the managing director of the JTB told Arab News.

“We expect the return of international tourism during August, September and October after overcoming several obstacles,” Arabiyat added.

Jordan stood out for its low COVID-19 rates at the start of the pandemic but then saw an exponential rise in confirmed cases, and by November recorded the highest number of coronavirus-related deaths per capita in the Middle East. Authorities declared a state of emergency and imposed one of the strictest lockdowns in the world, hitting the tourism sector hard.

Jordan has since managed to flatten the epidemiological curve, has moved from a UK “red list” country to an “amber” one, and in February significantly accelerated its inoculation campaign.

“Societal immunity is high and our epidemiological situation gives positive indications that a complete breakthrough for tourism in the kingdom is near,” Arabiyat said, adding that Jordan has eased more restrictions compared to many other countries, which will play a major role in attracting tourists.

He said King Abdullah II directed the government to work intensively, through its ambassadors, to depict Jordan as a green country, and that it is “clearly moving in that direction.” Marketing campaigns are in place and tourism offices are ready to cooperate, as some countries have already moved the kingdom to their “green” lists. Jordanian hotels and resorts have also begun receiving international bookings from September to November.

Minister of Transport Wajih Azayza said that Queen Alia International Airport received 9 million passengers in 2019, and hopes to return to these numbers after the pandemic.

The airport said on July 17 it welcomed over 1.2 million passengers during first half of the year, with the highest number recorded in June with more than 389,000 passengers. The airport’s total economic contribution exceeded $3.53 billion (about 8.9 percent of GDP).

The government has also implemented subsidization programs and launched a tourism risk fund valued at $28.2 million to support the sector and alleviate damages. In 2019, Jordan received a record 3 million visitors, bringing in $5.78 billion, which fell to $1.41 billion in 2020.

Last month, the king called for unified efforts to help the tourism and travel sector recover, which accounts for about 20 percent of GDP, and promote tourism to the “Golden Triangle” of Petra, Wadi Rum, and Aqaba.

Arabiyat said that Petra, one of the seven wonders of the world, was most affected due to its high dependence on international tourism, but expects to “hear positive news by September, as there is a demand for the ‘Golden Triangle.’”

From July 1, authorities implemented the second phase of Jordan’s strategy to return to normal life, with tourist facilities permitted to reopen at full capacity. The curfew in the areas of the “Golden Triangle” in the south were lifted, and fully vaccinated visitors may enter as they have been declared COVID-free zones. Phase 3 will begin on Sept. 1, provided that cases remain low and the government reaches its immunization target.

He said after enduring two exhausting years of the pandemic, “returning to life as we knew it became a dream that everyone was yearning to live once more; yearning to travel and enjoy life, yearning to feel alive again, hence the name of our campaign ‘Breathe’… where people can enjoy life and just breathe.”

Fawzi Al-Hammouri, chairman of Jordan’s Private Hospitals Association, said there had been a remarkable increase in the number of patients arriving for treatment in Jordan in June, specifically from Saudi Arabia and other Gulf countries, after witnessing a decrease during the past year.

Arabiyat said, however, the greatest concern was preserving employment within the tourism sector.

Layali Nashashibi, director of communications and public relations at Movenpick Hotels and Resorts, said they did not let go of any staff throughout the pandemic, even though they had to close both hotels in Petra and one in Aqaba, while the hotel in the Dead Sea was taken over by the government and used for quarantining when it started to bring Jordanians home from abroad.

“Aqaba, at the beginning, it was clean from COVID-19, but Aqaba has tourism and the port. So, if both closed, then the economy will suffer, so they decided that Aqaba would remain open from 6 a.m. until 5 p.m.,” Nashashibi told Arab News.

“I had to interfere with the government to extend some hours of the (hotels and) restaurants, as well as to have more facilities open,” she said, adding that after speaking with the prime minister, they managed to extend opening hours until 10 p.m. across the whole kingdom.

“Now we are depending on international tourism to come back to Jordan … We are optimistic and we have been promised by the government, the Ministry of Tourism, and Jordan Tourism Board that Ryanair and EasyJet will resume flights (to Aqaba) by October,” she added. EasyJet has started taking bookings for Aqaba from November, while cruise ships have also began to trickle in with one from Jeddah expected to arrive in Aqaba at the beginning of August.

Nashashibi said they also hosted familiarization trips for tour operators. Authorities are offering different types of tax reductions and discounts on landing fees, and tourists from Eastern Europe started coming to Aqaba from the end of June, with planes from Russia expected to increase in the coming period.

The city is regulated by the Aqaba Special Economic Zone Authority, which has turned it into a low-tax, duty-free city, attracting several mega investment projects like Ayla Oasis, Saraya Aqaba, Marsa Zayed and the expansion of the port, all of which were greatly affected.

“Hopefully, COVID-19 will disappear and we return like before or better than before,” Nashashibi said, adding that she does not see tourism improving until the third quarter of 2022, and expects a boom in the tourism and economic sectors by 2023.

Sally Abu Hijleh, from Montana Travel and Tourism agency, also said it will take about a year for tourism to return, adding that they are working on offers and discounted prices to encourage travel.

For Marwan Eid Abo Al-Adas, owner of souvenir shop Bazaar Al-Wadeeh in Jarash, even if tourists return this summer, all the tourism sectors have suffered such heavy losses that, he believes, they will still struggle.“The compensation will be greater after two or three years (as) there must be continuity in the tourism sector,” he said.

Marwan Soudi, a Jordanian living abroad, who was not able to return home last year, said: “The way they are handling the pandemic here in Jordan, and the way they rolled out vaccines really fast, the authorities are saying that the tourism and just everything being back to normal by 2022-2023, I would say that sounds like a reasonable aim.”

Saudi tourist Abdul Aziz Al-Shalawi said due to Jordan having one of the lowest rates of infections, tourists from Saudi Arabia prefer to visit this summer more than any other country, especially Europe, as its “safety is excellent.”

He said Jordan was beautiful and diverse and that Saudis were also attracted to the kingdom for its medical options. “Jordan has potential and very good doctors and is focused on attracting tourists for treatment, whilst also enjoying their time,” he added.

American tourist Tom Langdon said he hoped tourism would open up more from July to help the Bedouins in Petra, and the people that rely on tourism.

“It’s pretty unfortunate. I went to Petra, and I think there was like maybe 20 people there, and one of the vendors showed me a video, and it looked like a rock concert, it looked like you could barely move without touching someone and he said that that’s how it used to be before COVID-19,” Langdon said.

“I think (Jordan) is an untapped source, I think it’s unfortunate that a lot of this isn’t known to more people. Pretty much every place that I’ve been here in Jordan has been absolutely beautiful (and) I’ve been having a pretty good time.” nextCrete Continues to Invite Travelers to ‘Sense the Authentic’