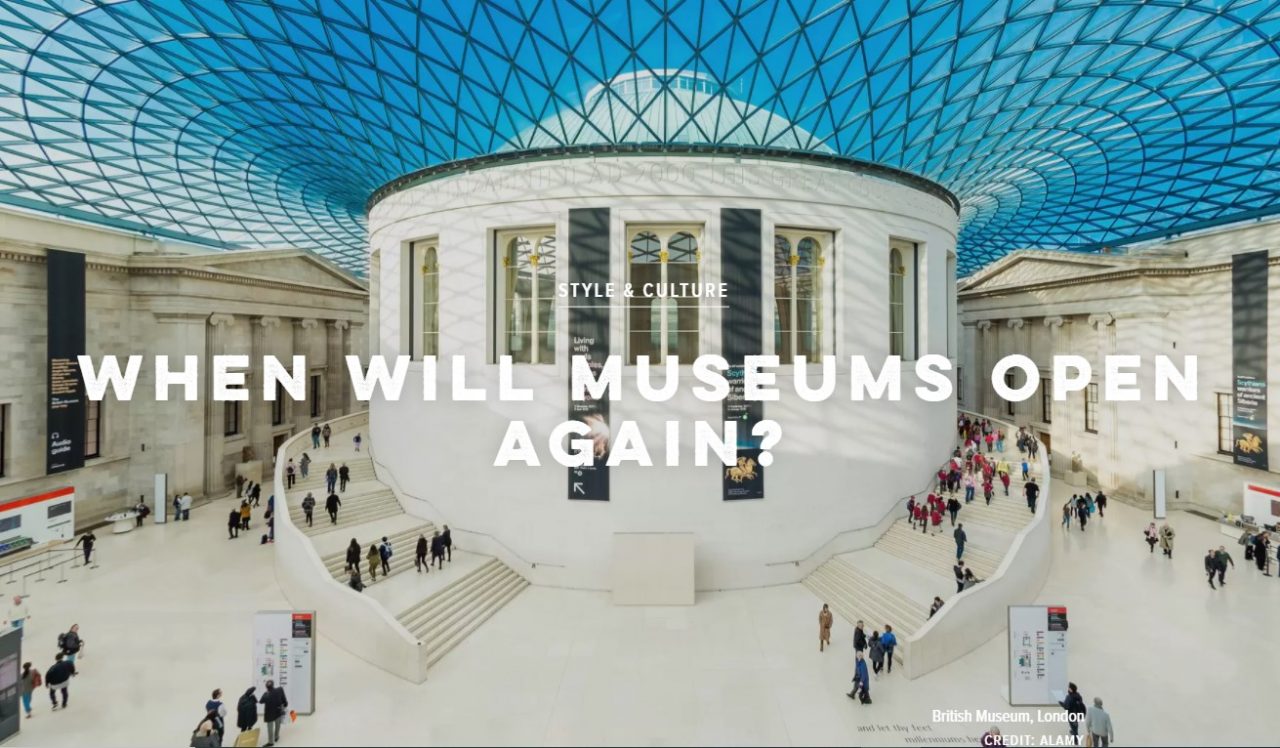 n the government’s four-step roadmap to remove lockdown restrictions, museums in England can reopen on Monday 17 May. So while shops and libraries can open from Monday 12 April, we’ll have to wait another month after that until we can return to our favourite collections and explore new exhibitions for the first time. In Scotland, Monday 26 April is the opening date, while Wales and Northern Ireland have yet to announce one.

It’s been a sobering time for our cultural institutions. According to a survey by The Art Newspaper, last year visitor numbers at the world’s top 100 museums and art galleries were, unsurprisingly, down 77 per cent from 2019. Which means revenues have plummeted, staff have taken redundancy and exhibition budgets have been cut, despite financial assistance from the government’s Culture Recovery Fund. It may take several years for them to recover, and some may be forced to close their doors permanently. So when museums can reopen, we should all support them as much as we can – booking tickets, meeting friends there, and spending a little more time in the gift shop than usual.

During lockdown, our cultural curiosity has been somewhat sated by online tours and virtual lectures, from museums both in the UK and worldwide. There’s still time to immerse yourself in exhibitions such as Arctic: Culture and Climate at the British Museum, Queer + Croydon at the Museum of Croydon and the strobe-lit Electronic: From Kraftwerk to the Chemical Brothers at the Design Museum. Forthcoming exhibitions for 2021 include Fantastic Beasts: The Wonder of Nature at the Natural History Museum, Nero at the British Museum and AI: More than Human at Liverpool’s World Museum. Discover more at the Art Fund. Thankfully, there are several revamps as well as new museums opening in 2021 across the country. In London, the Museum of the Home, formally known as the much-loved Geffrye Museum, reopens in Hoxton this spring with new galleries devoted to our domestic history, while the Manchester Jewish Museum – the only Jewish-focused museum outside the capital – reopens in a brand new building in June. There’s also Mary Shelley’s House of Frankenstein in Bath, Derby’s Museum of Making and MOX, Oxford’s revamped museum, opening later this year.

Museums have the power to fascinate and inspire. This summer, without the usual number of tourists in Britain and with timed tickets to stagger visitors, we’ll be able to explore them without queues or the need to peer over someone else’s head. ‘It will be culture without crowds,’ says Bernard Donoghue of the Association of Leading Visitor Attractions. Two centuries ago, a certain John Keats was moved to write ‘On Seeing the Elgin Marbles’ after a visit to the British Museum. We may not write a sonnet, but we could at least take a few Instagram shots and encourage others to come too.