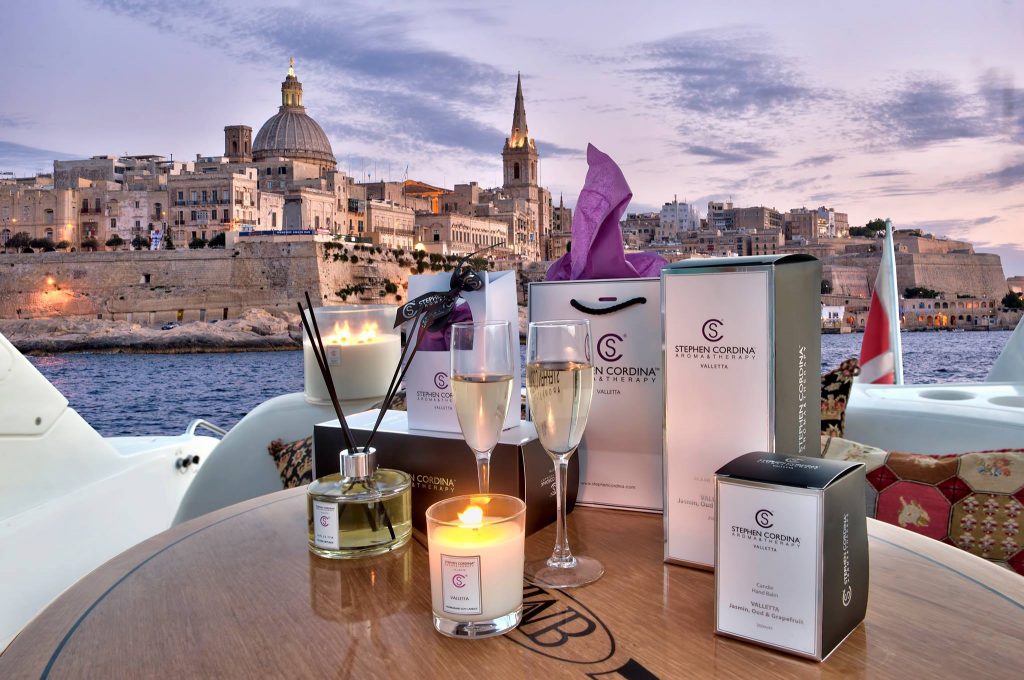 Malta’s first perfumer in modern times. Having started in 2001, Stephen Cordina is now established as by far the predominant force in the field of creating and manufacturing aromatherapy-based skin care and bathroom products in Malta for sale at home and for export.

From a business started in 2011 with the launch of his signature natural wax cosmetic grade candle Stephen Cordina Aroma&Therapy now lists an extensive range of scented products for both domestic and corporate use. The product list now also includes gentlemen’s’ grooming items and a large range of professional Spa necessities.

Cordina candles are made with vegetable wax and scented using essential oils. The melted wax being of cosmetic grade may safely be applied to the skin as a fragrant and soothing balm. In sizes ranging from 70ml to 15 litres this product is available now in over twelve scents including Ylang Ylang & Mandarin, Verbena, Gozo, Mdina and Valletta – all designed personally by Stephen and based on his beloved Maltese flora and history.

Developing further on the use of this wax Stephen has created an ultra high-grade candle for use only by professionals in Spas. These massage candles contain higher levels of essential oils for use by masseurs in therapy sessions.

Room Diffusers rapidly followed the launch of the candle range and are now offered in sizes from 50ml to 3 Litre. Ten different Maltese based fragrances are currently produced.

All Cordina products follow the same principle of being made to create a pleasing and safe fragrance while at the same time carrying potential healthy and therapeutic benefits to the users.

Stephen’s first significant corporate client was The Corinthia Palace Hotel and Spa in Malta where his large scented candles were used widely in the public areas, the Spa and at many of the hotel’s special events. His list of hotel clients now includes many of the other top properties in Malta together with leading hotels in Spain, Switzerland, Czech Republic, and Hungary. Many other businesses, including the Super Yacht sector, now feature on the client list and the Christmas Corporate Gift brochure is widely used annually by both domestic. Stephen also introduced the ecosystem of refill for bathroom amenities for use in hotels and overseas customers.

As the use by businesses of fragrance – and particularly those with eco-friendly credentials – becomes more common Stephen Cordina has developed a corporate consulting offering to advise on the efficient and safe use of scents in public areas. This often includes the design of bespoke scents and products for exclusive use and commissions have already been completed in Malta, Switzerland, Hungary and the United Kingdom.

Stephen Cordina  (38) was born on Gozo – the second largest and most lush of the Maltese Islands. He now lives by the Grand Harbour in Malta and has his laboratory and factory nearby in Paola Industrial Estate.  At 16 he was accepted into the Pre-Vocational Medical School before moving into the field of Alternative Medicine in Malta. After Malta – the United Kingdom and Switzerland for eight years. He received Diplomas in Aromatherapy, Reflexology, Clinical Medicine, Perfumery and Cosmetology.

To further develop his skills and experience Stephen then moved to England and later Switzerland. During this period he was accredited as an Aromatherapist (BCMA – British Complementary Medical Association) and SVBM (Swiss Federation of Professionals). He has been trained and certified in Perfumery and Natural Skin Care manufacturing and was active as an Alternative Therapies Practitioner for over a decade.

In 2012 Stephen was awarded the JCI young creative entrepreneur awards.

previousThe STARS In The Mediterranean