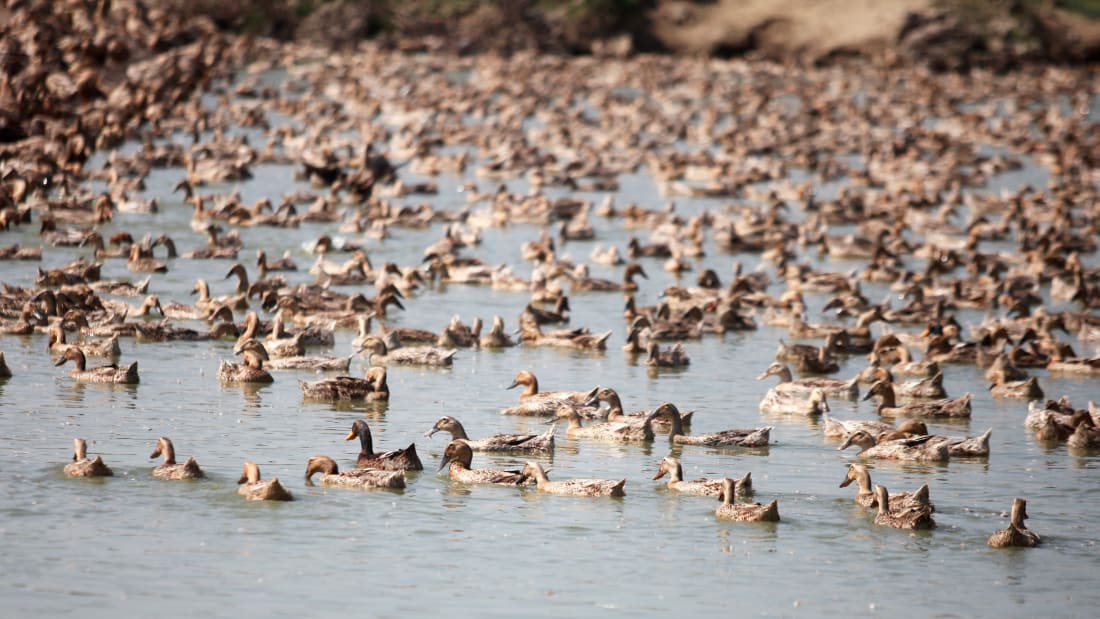 (CNN) — “Would you like salted duck egg with that?” asked the cook.
I was on a trip to Yangzhou in China’s Jiangsu province and had popped into a small eatery for a bite of breakfast, ordering congee and a side of pickled vegetables.
Before I could respond, the cook disappeared into the kitchen, then reemerged holding a grayish-green egg balanced on a plate.
“Sure,” I nodded.
Plain congee, after all, pairs best with sour or pungent condiments that pack a lot of punch. And in my experience, the sharp flavor of salted duck eggs — cured in brine to produce salty whites and rich, creamy yolks — could be even more stimulating than a cup of joe.
When the meal arrived, I sliced the egg open, ready to spoon out the fatty yolk.
But as the two halves of the egg teetered on the plate, I instinctively did a double take. Not one, but two oozy, bright-orange yolks rested in their egg-white cradles.
Amazed, I waved the cook over to show him this rarity.
He chuckled, then explained that most of the salted duck eggs in their kitchen contained two yolks. They’d been brought over from a county situated within Yangzhou, called Gaoyou. There, something most places would consider a rare and random anomaly is in abundant supply. “When we talk about double-yolk eggs, we think of Gaoyou,” says David Yan, a Jiangsu native and Wild China travel guide. “This county is especially renowned for these eggs, and has got a reputation.”
It turns out that Gaoyou’s geographic position makes it ripe for the production of salted duck eggs.
The county is situated in a region with plentiful waterways, such as Gaoyou Lake (the province’s third largest freshwater lake), which for centuries has enabled the local waterfowl industry to thrive.
But that’s not the only way in which the natural environment practically predestined Gaoyou’s eventual claim to fame. Salt, which is necessary for curing the duck eggs, is bountiful in the area.
Northern Jiangsu province’s salt marshes, which are now part of a biosphere reserve where visitors can go birdwatching and hiking, were once primarily known for being a major source of China’s salt.
“That was the epicenter of the salt industry,” explains Miranda Brown, a professor of Chinese studies at the University of Michigan. “You have the lake for the duck, and then you have the salt industry literally next door.”
A worker at Jiangsu Gaoyou Duck Co. Ltd uses a light to search for double-yolk eggs
In the city of Yancheng (literally meaning “Salt City”) not far from Gaoyou, a vast network of crisscrossing waterways connects the coastal salt marshes to the Grand Canal, a huge manmade river that allowed salt producers to make a handsome profit selling to the rest of the country.
“Salt merchants were rich and had very fine tastes,” says Brown. “They threw lavish banquets that would last all day and pull together the most exquisite foods.”
What wealthy people ate was often considered a benchmark for what constituted fine dining, and writers and poets who rubbed shoulders with the affluent merchants would pen treatises about the food.
In the late 18th century, the Qing-Dynasty scholar and gastronome Yuan Mei wrote in “Recipes from the Garden of Contentment” (translated in 2017 by Sean J.S. Chen): “Salted eggs from Gaoyou are very good, with deep reddish yolks loaded with oil.”
Such references helped cement salted duck eggs as a gastronomic specialty of Gaoyou, entwined with the area’s very identity.
That association continues to run deep today; according to the Chinese search engine Baidu, choirs in Gaoyou regularly perform a folk song called “数鸭蛋” (Shǔ Yā Dàn, which literally translates as “Counting Duck Eggs”) that celebrates the local specialty.
This sort of culinary regionalism was and still is common throughout China, with different areas becoming associated with particular food products.
According to Brown, the tendency for these correlations stems largely from the country’s vast size and diverse topography, which “leads to different culinary possibilities. That becomes a way that people start to identify places and regions and even people — by the foods that are best grown in those areas.”
For example, pu-erh tea from the mountains of southwest China’s Yunnan province is revered across China, while Inner Mongolia Autonomous Region’s vast pastures, ideal for sheep herding, produce much of the country’s mutton.
Gaoyou’s waterways are a popular tourist attraction
In similar fashion, Gaoyou became recognized for environmental conditions that favored salted duck eggs.
“Somewhere along the line, Gaoyou’s duck farmers must have realized that it would be even better for business to breed the ducks to produce more double yolks,” says Meng Wen, the cook who first introduced me to double-yolk salted duck eggs in Yangzhou.
Farmers liked that people considered double yolks a symbol of good fortune because they were so uncommon. Moreover, twice the yolk also meant twice the nutrient content.
To increase the frequency of the double-yolk eggs, breeders artificially select ducks for the genetic anomaly.
In a 2011 paper examining the fitness of Gaoyou’s double-yolk eggs, researchers say: “Usually, a double-yolk egg will not even survive to hatch. If it does hatch, the poor ducks are severely deformed, connected to one another… However, since these ducks have been subjected to artificial rather than natural selection for generations, the defect has spread in the population.”

Two yolks are better than one

Nowadays, the phenomenon of double yolks, which would ordinarily make rare and random appearances, occurs in around 2 to 10% of the eggs laid by Gaoyou ducks, according to the 2011 study.
“They put all the duck eggs in a room over a light to see whether it’s a single-yolk one or a double-yolk one, before they actually salt the egg,” explains Hu Ruixi, co-founder of food tour company Lost Plate.
Sold all across China nowadays, Gaoyou’s double-yolk salted duck eggs are labeled as such — and often sell for several times more money than their single-yolk counterparts do.
Gaoyou’s double-yolk eggs sell for several times more money than their single-yolk counterparts do
Walking through the markets and grocery shops of Yangzhou, I noticed that eggs with double the yellow greatly outnumbered the usual variety — so beloved are the oily yolks for their lusciousness.
To make the most of my proximity to Gaoyou, I ordered a double-yolk egg each time I dined at a teahouse in Yangzhou. I would emulate what I saw other diners doing — stabbing the eggs with a chopstick to allow the greasy yolk to run out.
Most people who have tried salted duck eggs, myself included, would probably argue that the yolk is indeed the best part, its creamy and rich flavor superior to that of the much brinier whites.
Yan explains that “some people don’t eat that much of the egg white part.” Hu, too, says: “I’m not really into the white part. It’s really salty. The yolk is really creamy and very smooth.”
However, I later learn that Yuan Mei would have opposed our preferential treatment of the yolk.
In “Recipes from the Garden of Contentment,” he breaks down what he insists is the proper way to enjoy salted duck eggs: “Place the whole egg on a plate, cut it in half, and serve the shell, yolk, and whites all together. One should not remove the whites and reserve only the yolk because the flavors would be incomplete.”
I realize that this makes sense. After all, farmers would not have gone to the trouble of breeding double-yolk eggs if serving two yolks by themselves on a plate would have been sufficient.
In the case of these eggs, the whole is greater than the sum of its parts — but for salted egg lovers, it doesn’t hurt to have extra of the best part.
Post Views: 3,524