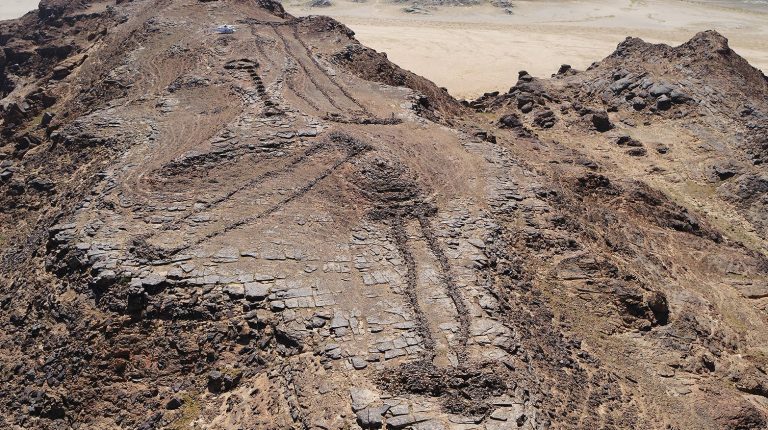 Aerial, ground research on site performed by team from University of Western Australia

Saudi Arabia revealed, last week, a new archaeological discovery that is more ancient than previously believed, claiming that this discovery is older even than the Great Pyramids of Egypt.

The monumental complex of structures called “mustatils”, located at the ancient Al-Ula site, had previously been known. However, the Royal Commission of AlUla (RCU) backed team has so far recorded more than 1,000 of these structures, roughly twice as many as had previously been identified.

Three monumental mustatils and a later funerary ‘pendant’ have been located atop a rocky outcrop on the border of Khaybar and Al-Ula cities in Saudi Arabia.

The aerial and ground research, led by a team from the University of Western Australia, surveyed vast stretches of the region by remote sensing and helicopter.

After recording their presence from the air, the team then explored some 40 at ground level and excavated one, altogether constituting the largest study of mustatils to date. These ancient structures in the Arabian Desert provide early evidence of ritual activity at the site.

Radiocarbon dating of a cattle horn and tooth that were found in a chamber at one mustatil in Al-Ula, along with other discoveries which appear to have been used as ritual offerings, revealed a dating of the Late Neolithic period, in the sixth-millennium BC. This makes the structures over 7,000 years old, supporting Saudi claims that they are older than the Great Pyramids at Egypt’s Giza Plateau.

“We think of them as a monumental landscape,” said Melissa Kennedy, an archaeologist at the University of Western Australia in Perth and an author of the study.

Talking to the ABC television station, Kennedy also said, “We are talking about over 1,000 mustatils. These things are found over 200,000 sqm, and they’re all very similar in shape, so perhaps it’s the same ritual belief or understanding.”

The “head” of a mustatil consists of a larger wall of stones, and contains a small niche or chamber. Researchers have found animal bones in at least one of the chambers, which suggested that it was used to make sacrificial animal offerings.

Saudi Arabia revealed, last month, that it was establishing the Kingdoms Institute, which falls under the auspices of the RCU. The institute will serve as a new study centre, among 15 cultural facilities that will form part of the heritage-rich region’s transformation.

The RCU has been conducting a programme of extensive research across the AlUla area that is expanding the knowledge of the area’s human history. It is also working on becoming the intellectual foundation of the institute as a global hub for archaeological research and conservation.

“We have only begun to tell the hidden story of the Ancient Kingdoms of North Arabia,” said José Ignacio Gallego Revilla, the RCU’s Archaeology, Heritage Research, and Conservation Executive Director.

He added that there is much more to come as the depth and breadth of the area’s archaeological heritage is revealed.

Revilla noted that this heritage has, for decades, been under-represented, but is set to finally have the showcase it deserves in the Kingdoms Institute.