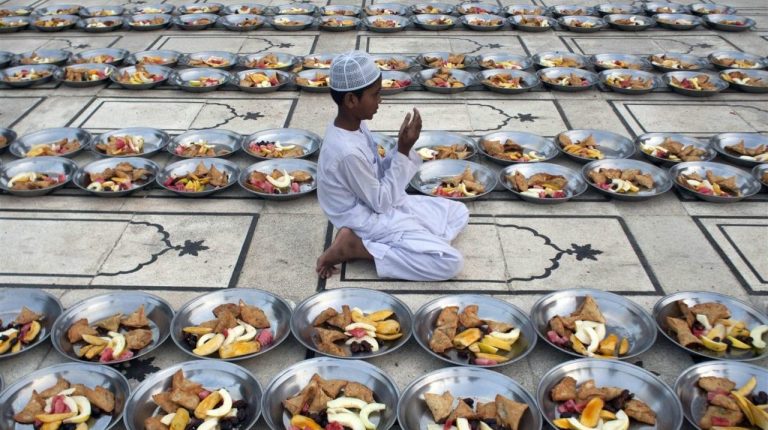 The holy month of Ramadan carries many different customs and traditions across countries and regions. Each country has its own unique customs, which become part of the culture of the people who create their own characteristics for the month.

Spirit of Ramadan in Egypt captures everyone, with traditional songs, lanterns, and iftar cannon

The moment Ramadan starts, Egypt celebrates the month in all its aspects, most notably in the spiritual rituals that conflate fasting, praying, and participating in charitable activities. It also includes the social side with iftar (breaking the fast) and suhur (pre-dawn meal) feasts, television serials, and soccer tournaments.

The spirit of Ramadan captures everyone, with the traditional songs of long gone days, the lanterns, and the iftar cannon. These celebrations always have a different taste in Egypt.

Throughout the country’s history, some traditions have survived the years with each generation adding its timeless touch.

Some of these Ramadan fixtures include the fanous (lantern), mesaharaty (the man whose job it is to wake people up for the pre-dawn meal), and el-madfa’ (the canon signalling iftar time). In the Ivory Coast, also known as Côte d’Ivoire, the holy month is called “sune kalou”, which means the month of fasting.

When Ramadan approaches, religious lectures and preaching start in mosques in order to educate people on the fiqh (Islamic jurisprudence) of fasting. One of the most famous Egyptian clerics in the Ivory Coast is Sheikh Abdulbasit Abdulsamad, with mosques playing recordings of his voice reciting the Quran before the Magrhib (sunset) prayer.

Iftar is different in the Ivory Coast from any other African country, as no one has their iftar at home. Families cook their food and take it to another poor family in order for everyone to have iftar together. Mostly, iftar is a light meal that varies from an area to another. The dishes called “madid”, “tharid”, as well as soup remain some of the most important foods in Ramadan in Ivory Coast.

The most famous food in Ramadan there is known as “mumi”. It is bread baked in a very distinct way, made of barley, and eaten with an oil from the Ivory Coast. The most famous drinks are hibiscus, ginger, “king’s brain”, and “dajih”, which is a local powder mixed with milk, flour and sugar.

Ramadan in Senegal is a month when the values of tolerance and cooperation are highlighted. Charities give great attention to organising iftar meals across the capital, Dakar, in order to help the needy or drivers who did not make it home in time to break their fast.

One of the most well-known of Senegalese customs is one called “Sugar Core”, which means “Ramadan’s Sugar”. It means giving gifts to loved ones to express love in the month.

The tradition has become a common duty, especially among women who spend a lot of money on buying gifts for their husbands.

As for Eid Al-Fitr, Muslims in Senegal call it “Corité”, which means “the end of fasting”, and celebrate it within an atmosphere of joy. The Senegalese prepare for this occasion by buying new clothes and fancy food, such as a famous dish made with rice, tomatoes, and onion sauce with lemon juice. There is also Senegalese-style couscous, which is prepared alongside all kinds of meat, bird, and fish. In Morocco, the month of Ramadan allows the opportunity for families to meet and exchange social visits. Married members of the same families meet at the family home, or what they call the “Big House” on Fridays in Ramadan.

There is another beautiful tradition in Ramadan, when parents celebrate the first fasting for their children. They prepare a special iftar, consisting of delicious Moroccan dishes, besides milk, dates, and dry fruits.

Moroccans celebrate the 15th night of Ramadan by reciting the Quran in mosques, and women prepare couscous dishes or desserts to distribute among the poor and worshippers in mosques.

Another Ramadan custom in Morocco is the celebration of Laylat Al-Qadr (“Night of Power”) which is usually observed by Moroccans on the 26th night of the holy month. On that occasion, they wear traditional costumes and organise horse parades.

Moroccan cuisine is one of the most famous in the world. They start their iftar meal by eating dates and drinking milk. After the Maghrib (sunset) prayer, they eat harira, a traditional soup always served as a starter during Ramadan. The main dishes are served after Tarawih prayer, such as tajine and couscous. Morocco is known for its dates, especially medjool dates, which are very expensive.

It is customary for Tunisians to break the fast with dates and milk, before performing Maghrib (sunset) prayer, and then returning to the iftar table, which is characterised by Ramadan specials. Tunisians begin the Ramadan iftar with the words “Sehat Sherbetkom”, which means “health and wellness”.

And the most important dish on the Tunisian table is the Tajine, which can be made in various ways. Tajine is a popular dish that differs from one area to another.

The most important dessert dishes are “Raffees”, made of rice cooked with dates and raisins, or “Madmouga” made of sheets of fried dough and stuffed with dates and sugar. In the north-west of Tunisia, porridge is prepared with flour, ghee, and honey. In the coastal areas, pies are made with raisins. The dessert “Barracuche” is thick flour granules cooked with varieties of vegetables. Algerian families hold special celebrations for children who fast for the first time. Girls wear new dresses and sit as queens. Amidst a joyous celebration of their first fast, they sit in a high place at the time of iftar until they feel the attention and appreciation. Many Algerian families prefer to circumcise their sons on the night of the 27th of the month.

The Algerian table in Ramadan is characterised by a basic dish, Harira, as a soup. It is also unique to serve some foods such as “sweet meat”, a dish made of meat, dried plum, raisins, and rose water, and “Barboche”, which is a couscous dish. In addition to the soup, dishes such as bourak and sweet tajine are served as appetisers.

For the suhur meal, Algerians mostly eat couscous and “mousouf”, a dried couscous with raisins and yogurt.

Not only are Algerians keen on eating during the month of Ramadan, they are also keen on religious duties and worship, where mosques are crowded during the Tarawih prayer and musical festivals vary widely, especially in the second half of the month. Many musical societies celebrate with different types of popular and Andalusian music.

During the nights of Ramadan, there are sessions called “Samra”, including sessions for women and girls only.

Eritreans have a post-breakfast rite, where tea and coffee, which are roasted and grilled with ginger and cardamom, are placed in a special jar called “Gabna”, made of pottery. A special table is prepared with cups, sugar and a bakhoor incense which are a main tradition.

Next to it, Hambasha – bread made of flour, sugar, yeast, and margarine – is served. Families gather around the table and have their coffee and tea on three different stages. The first is called “the Cup”, the second called “Baraka” (blessings) and the third is called “Khadr”. In the capital, Asmara, Muslims bring food to mosques every Friday and Monday and festivals are held in the last 10 days of Ramadan.

The age at which fasting starts for many Tanzanians is 12. Restaurants owned by Tanzanian Muslims are closed during the day.

Before the Azan (call to prayer) for the Maghrib (sunset) prayer, some mosques announce the time of iftar by beating drums allowing people to head to their homes.

Ramadan meals in Tanzania include dates with which they start their breakfast alongside sweetened water, and coconut-flavoured rice with vegetables and fish. As for drinks you will find tea with vanilla and tropical fruit juices.

Djibouti is an Islamic state located in the Horn of Africa, and most of its inhabitants are Arabs such as Omanis and Yemenis, as well as African ethnicities.

The most important custom there includes married women only wearing the so-called “shield”, which is the country’s traditional costume which country women wear on feast and holiday nights. The men wear the “Makawy” which resemble the Indian sari. Men wear it around their waists.

A strange Ramadan habit there is that the people of Djibouti stop eating fish throughout the month of Ramadan, as it causes thirst during fasting.

Near the end of Ramadan, specifically on the 27th day, people go out from mosques chanting goodbye to Ramadan.

Muslims who break their fast usually eat Sambousa, Hatees, Tharid, and lamb meat. As for sweets, Djibouti is famous for Mukhbaza. They also drink tea with cinnamon sticks.

When the start of Ramadan is announced, cities with a Muslim majority are decorated with coloured fabrics, and the occasion is celebrated with a festive atmosphere. Muslims walk around exchanging congratulations and beating drums.

Also, before suhur, they beat drums to wake fasting Muslims up and sing Islamic songs which urge everyone to fast. Sometimes they will gather in mosques for a group iftar, and everyone shares food together.

In Kenya, people have sweet foods to overcome thirst. They eat traditional foods like cooked rice with coconut, and it is usually served with fish or chicken. Sokoma, which is cooked cabbage with tomatoes and onions, is served as appetisers. Usually, these meals are served with Kenyan tea, and before Fajr (dawn), everyone gathers in mosques bringing tropical fruit and water bottles to prepare for fasting the next day.