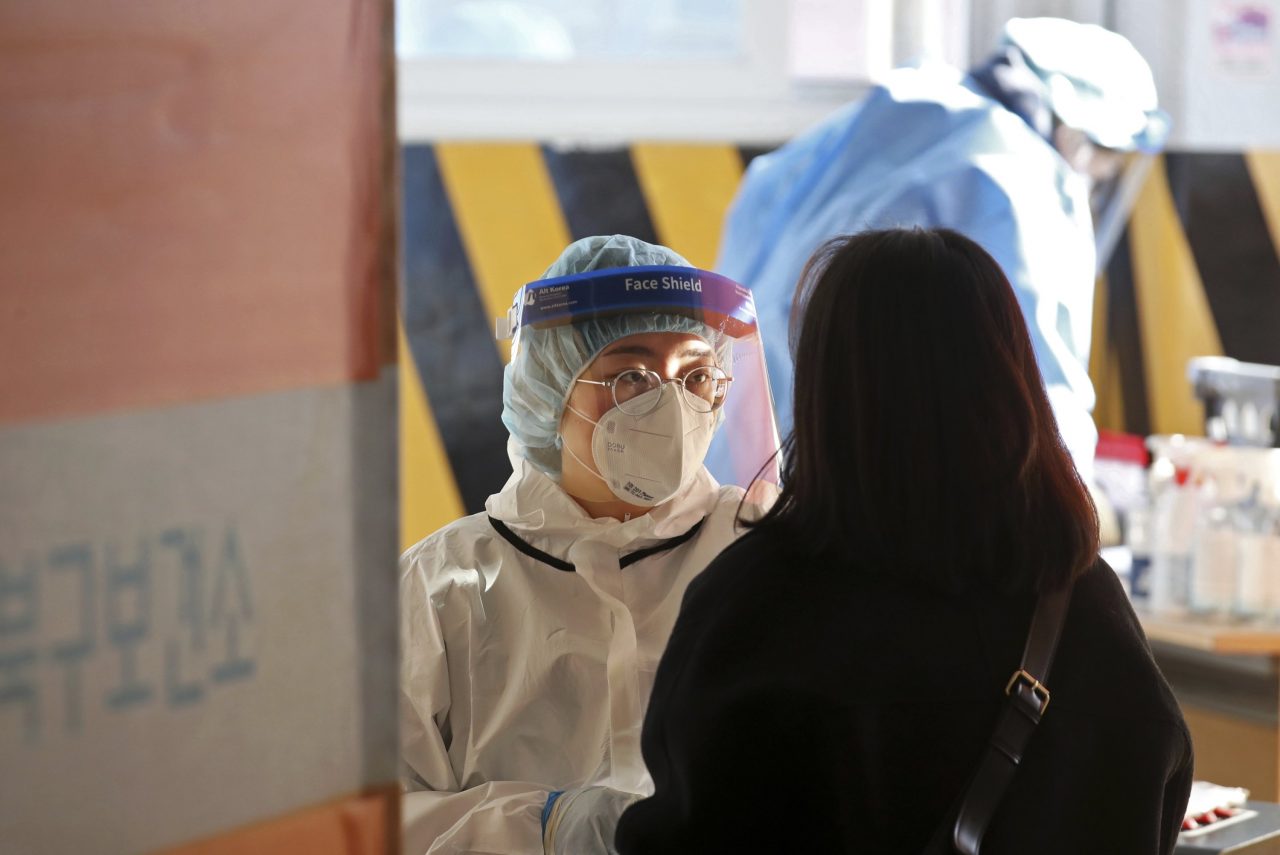 As countries around the world fret over the arrival of the omicron coronavirus variant and a sudden rise in daily infections, experts insist that the pandemic will continue to cloud our daily lives in 2022 unless we really get serious about the endgame.

Pandemics do eventually end, even if omicron is complicating the question of when this one will. But it won’t be like flipping a light switch: The world will have to learn to coexist with a virus that’s not going away.

The ultra-contagious omicron mutant is pushing cases to all-time highs and causing chaos as an exhausted world struggles, again, to stem the spread. But this time, we’re not starting from scratch.

Vaccines offer strong protection from serious illness, even if they don’t always prevent a mild infection. Omicron doesn’t appear to be as deadly as some earlier variants. And those who survive it will have some refreshed protection against other forms of the virus that still are circulating – and maybe the next mutant to emerge, too.

The newest variant is a warning about what will continue to happen “unless we really get serious about the endgame,” said Dr. Albert Ko, an infectious disease specialist at the Yale School of Public Health.

“Certainly COVID will be with us forever,” Ko added. “We’re never going to be able to eradicate or eliminate COVID, so we have to identify our goals.”

At some point, the World Health Organization (WHO) will determine when enough countries have tamped down their COVID-19 cases sufficiently – or at least, hospitalizations and deaths – to declare the pandemic officially over. Exactly what that threshold will be isn’t clear.

Even when that happens, some parts of the world still will struggle – especially low-income countries that lack enough vaccines or treatments – while others more easily transition to what scientists call an “endemic” state.

The omicron crisis shows we’re not there yet but “I do think we will reach a point where SARS-CoV-2 is endemic much like flu is endemic,” he said.

Exactly how much continuing COVID-19 illness and death the world will put up with is largely a social question, not a scientific one.

“We’re not going to get to a point where it’s 2019 again,” said Dr. Amesh Adalja, a senior scholar at the Johns Hopkins Center for Health Security. “We’ve got to get people to think about risk tolerance.”

The newest variant is a warning about what will continue to happen “unless we really get serious about the endgame,” said Dr. Albert Ko, an infectious disease specialist at the Yale School of Public Health.

“Certainly COVID will be with us forever,” Ko added, as The Associated Press (AP) reported. “We’re never going to be able to eradicate or eliminate COVID, so we have to identify our goals.”

Already the U.S. is sending signals that it’s on the road to whatever will become the new normal. The Biden administration says there are enough tools – vaccine boosters, new treatments and masking – to handle even the omicron threat without the shutdowns of the pandemic’s earlier days. And the Centers for Disease Control and Prevention (CDC) just reduced to five days the time that people with COVID-19 must stay in isolation so they don’t sicken others, saying it’s become clear they’re most contagious early on.

India offers a glimpse of what it’s like to get to a stable level of COVID-19. Until recently, daily reported cases had remained below 10,000 for six months but only after a cost in lives “too traumatic to calculate” caused by the earlier delta variant, said Dr. T. Jacob John, former chief of virology at Christian Medical College in southern India.

Omicron now is fueling a rise in cases again, and the country in January will roll out vaccine boosters for front-line workers. But John said other endemic diseases, such as flu and measles, periodically cause outbreaks and the coronavirus will continue to flare up every so often even after omicron passes through.

Omicron is so hugely mutated that it is slipping past some of the protection of vaccinations or prior infection. But Dr. William Moss of Johns Hopkins Bloomberg School of Public Health expects “this virus will kind of max out” in its ability to make such big evolutionary jumps. “I don’t see this as kind of an endless cycle of new variants.”

One possible future many experts see: In the post-pandemic period, the virus causes colds for some and more serious illnesses for others, depending on their overall health, vaccine status and prior infections. Mutations will continue and might eventually require boosters every so often that are updated to better match new variants.

But human immune systems will continue to get better at recognizing and fighting back. Immunologist Ali Ellebedy at Washington University at St. Louis finds hope in the body’s amazing ability to remember germs it has seen before and create multilayer defenses.

Memory B cells are one of those layers, cells that live for years in the bone marrow, ready to swing into action and produce more antibodies when needed. But first, those memory cells get trained in immune system boot camps called germinal centers, learning to do more than just make copies of their original antibodies.

In a new study, Ellebedy’s team found Pfizer vaccinations rev up “T helper cells” that act as the drill sergeant in those training camps, driving production of more diverse and stronger antibodies that may work even if the virus changes again.

Ellebedy said baseline population immunity has improved so much that even as breakthrough infections inevitably continue, there will be a drop in severe illnesses, hospitalizations and deaths – regardless of the next variant.

“We are not the same population that we were in December of 2019,” he said. “It’s different ground now.”

Think of a wildfire tearing through a forest after a drought, he said. That was 2020. Now, even with omicron, “it’s not completely dry land,” but wet enough “that made the fire harder to spread.”

He foresees a day when someone gets a coronavirus infection, stays home two to three days “and then you move on. That hopefully will be the endgame.”

As omicron fears rise across the globe, India extended its vaccinations to teens aged 15-18 on Monday, and Indonesia will begin giving COVID-19 booster shots to the general public from Jan. 12.

More than 200,000 people around India died in a huge spring virus wave that overwhelmed hospitals and crematoriums. Health workers have since administered more than 1.4 billion vaccine doses but less than half of India’s population is fully inoculated, according to government data.

Hundreds of teenagers patiently lined up with their parents on Monday morning outside a school turned into a makeshift medical center in the capital New Delhi.

“It’s really great to have your first vaccine,” said 16-year-old Soumadeep, after receiving his first dose of the Indian-made Covaxin. “It’s like a new year gift for the children.”

New Delhi and tech hub Bangalore are under overnight curfews starting at 10 p.m. each evening, with bars and restaurants in both cities ordered to operate at half capacity.

Mumbai, India’s commercial capital, has barred public gatherings of more than four people from 9 p.m. to 6 a.m. and restricted wedding ceremonies to 50 guests.

In Indonesia, health workers were given booster doses in July and the plan now is to cover all adults who took their second shots over six months ago. Some 21 million will be covered under the booster program this month, the country’s Health Minister Budi Gunadi Sadikin said Monday.

“It has been decided by Mr. President that (the program) will begin on Jan. 12,” he said.

Budi told a news conference that the country will need about 230 million doses for boosters and has secured nearly half of them.

The omicron variant has infected over 150 people in Indonesia since its detection last month, the majority of whom were international travelers.

Budi said six of the cases stemmed from local transmission in the capital Jakarta, Surabaya, Medan and Bali island.

Indonesia grappled with a devastating second wave of infections in July, but case numbers have plummeted since then.

Middle East countries have also seen the reassurance of the pandemic with Qatarian health officials warning that the country is witnessing the start of the third wave of the coronavirus.

According to Dr. Soha al-Bayat, head of vaccination at the Ministry of Public Health (MoPH), “The majority of new COVID-19 cases are associated with the omicron variant.” He added that there has been a significant uptick in the past two weeks.

“According to the primary available information, omicron is a fast spreader, but the symptoms are mild or moderate without any serious complications,” al-Bayat said on Qatar TV, according to Doha-based media outlet Al-Jazeera.

Kuwait has called on its citizens to avoid travel to several European countries hit hard by the omicron coronavirus variant.

In a series of statements overnight Sunday, the oil-rich Gulf state also urged Kuwaitis already there to return home because of the surge in cases on the continent.

The Foreign Ministry said they should “delay their trips” generally and, in particular, to France, Germany, the United Kingdom, Spain and Italy.

It also urged its citizens, often big spenders abroad, to leave those countries “considering the significant and unprecedented rise in the number of new cases” of COVID-19.

The number of recorded cases in Kuwait remains relatively low. But it jumped 20-fold in a month to reach around 600 cases on Sunday in the country of more than 4 million people. Elsewhere in the Gulf, cases have also surged.

In the United Arab Emirates (UAE), infections have risen almost fortyfold since the beginning of December.

Saudi Arabia on Sunday said that a booster shot will be required from Feb. 1 for entry into public places.

The kingdom has reimposed social distancing measures at the Grand Mosque in the Muslim holy city of Mecca, after recording the highest number of infections in months.