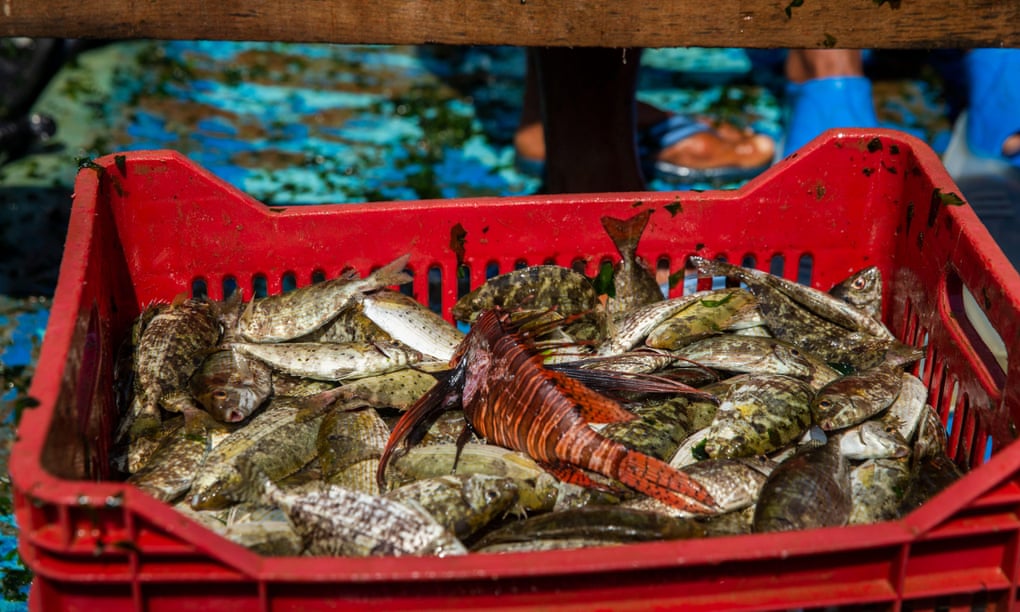 Pasquale Tuccio docks his small, blue and white wooden boat at the old pier on Linosa, one of Italy’s tiny Pelagie islands in the strait of Sicily. Inspecting his gillnet, he finds a slipper lobster, some sea bream, a bunch of parrotfish – and about six rabbitfish. Unlike his fellow fishers, who toss rabbitfish back, Tuccio will take them home for his cat. The fish have venomous spines, however, and he still remembers his first encounter with them. “I got stung only once,” Tuccio says. “I hope it won’t happen again. It was so painful.”

Rabbitfish Siganus luridus – also known as dusky spinefoot – is a tropical species, native to the Indian and Pacific Oceans. After the Suez canal opened in 1869, the rabbitfish entered the eastern Mediterranean, making its way into Greek waters by 1964. It has since moved into the central Mediterranean, where it has found an abundance of its favourite food: algae. In more recent years, the rabbitfish has been multiplying in the waters around Linosa, where it devours underwater vegetation. Researchers have found it as far west as France.

Siganus luridus is not swimming westwards alone. Among the more than 70 tropical fish that taken up residence in the Mediterranean, the lionfish (Pterois miles), silver-cheeked toadfish (Lagocephalus sceleratus), blue-spotted cornetfish (Fistularia commersonii) and the Golani round herring (Etrumeus golanii) have been spotted in increasingly western waters. As the sea warms and becomes saltier because of human-induced global heating, fish from tropical latitudes are finding a more welcoming habitat in an area that, at least nominally, is temperate, not tropical.

“This is also happening in other parts of the world,” says Fiona Tomas Nash, a marine ecologist at the Mediterranean Institute for Advanced Studies. “In Australia, Japan, South Africa, you are seeing these tropical fish expanding to temperate areas – and it’s clearly related to warming.”

While snorkellers might welcome these tropical visitors to the Mediterranean, marine scientists are concerned about threats to biodiversity, public health and fisheries. A shift from temperate to tropical would, and does, affect the whole Mediterranean ecosystem. Rabbitfish, for example, eat so much that they transform algal forests into barren wastes, destroying important nursery habitats for native species. Some fish coming through the Suez canal are even more harmful. In 2005, off south-east Greece, a fisher spotted a lone silver-cheeked toadfish (Lagocephalus sceleratus). A few years later, it was everywhere around the islands – from Crete to the Dodecanese and the Cyclades. In 2017, a silver-cheeked toadfish was caught off Ceuta, near Gibraltar; others have been seen off the coast of Catalonia.

Poisonous to eat, they also rip through fishing nets to raid the catch of squid, cuttlefish and other commercially valuable species.

“We know very little about potential predators [of the silver-cheeked toadfish], even in native habitats,” says Paraskevi Karachle, an ichthyologist at Greece’s Hellenic Centre for Marine Research who studies alien species. “In the Mediterranean we have recorded a few, such as Caretta caretta and groupers, as well as recent observations of cannibalism.”

In a bid to control their numbers, researchers are experimenting with possible uses for the silver-cheeked toadfish, such as fish meal for the aquaculture industry, or extracting its toxin for cosmetics and pharmaceuticals. But the viability of these applications is uncertain.

“Until 20 years ago, tropical species were confined to the eastern sections of the Mediterranean,” says Ernesto Azzurro of the Italian National Research Council, who, along with Manuela D’Amen at Anton Dohrn Zoological Station, has assessed the risk of species invasion into the Mediterranean under future climate scenarios. “Scientists had theorised back then the existence of a new biogeographical province, which on the west side did not extend beyond the strait of Sicily.” However, in the 21st century, so-called Lessepsian invaders – as the Indo-Pacific migrants are called, after Suez canal developer Ferdinand de Lesseps – have emphatically crossed that theoretical border. Between 1985 and 2006, the temperature of the Mediterranean rose by about 0.4C each decade, adding pressure to already overfished native species while favouring fish that thrive in warmer waters.

Future climate scenarios from the UN’s Intergovernmental Panel on Climate Change, when applied to species distribution models, show how the western Mediterranean will become increasingly habitable for tropical fish, as will the south Adriatic and south-west Italian coast. The newcomers may change, too, as they adapt. Some scientists argue that the lionfish – spotted off Apulia, Italy, and Albania in 2019 and 2020 – might expand its temperature range, coping with the colder winter waters of certain Mediterranean areas, as has happened with lionfish in the US.

Humans, too, are adapting. While in Linosa rabbitfish may be fit only for Tuccio’s cat, in Cyprus, where it has been around a while, it is considered a delicacy and fetches €25 (£21) a kilo. Meanwhile on Kastellorizo, in the Greek Dodecanese islands, it is skinned, deep-fried and served with a splash of vinegar. The thinking is that if you can’t beat them, eat them.

“The Mediterranean is suffering tropicalisation and this will continue,” says Nash. Efforts to create marine-protected areas and to restore ecosystems to make them more resilient to global heating and invasions may help, she says, but they are unlikely to reverse the trend, especially without full cooperation among states. “Nature doesn’t know about borders, right?”

“Even under the best scenario, these invasions will continue,” says Azzurro, who is also working with marine protected areas to engage communities in monitoring biodiversity shifts. “Ours will be an increasingly tropical sea.”