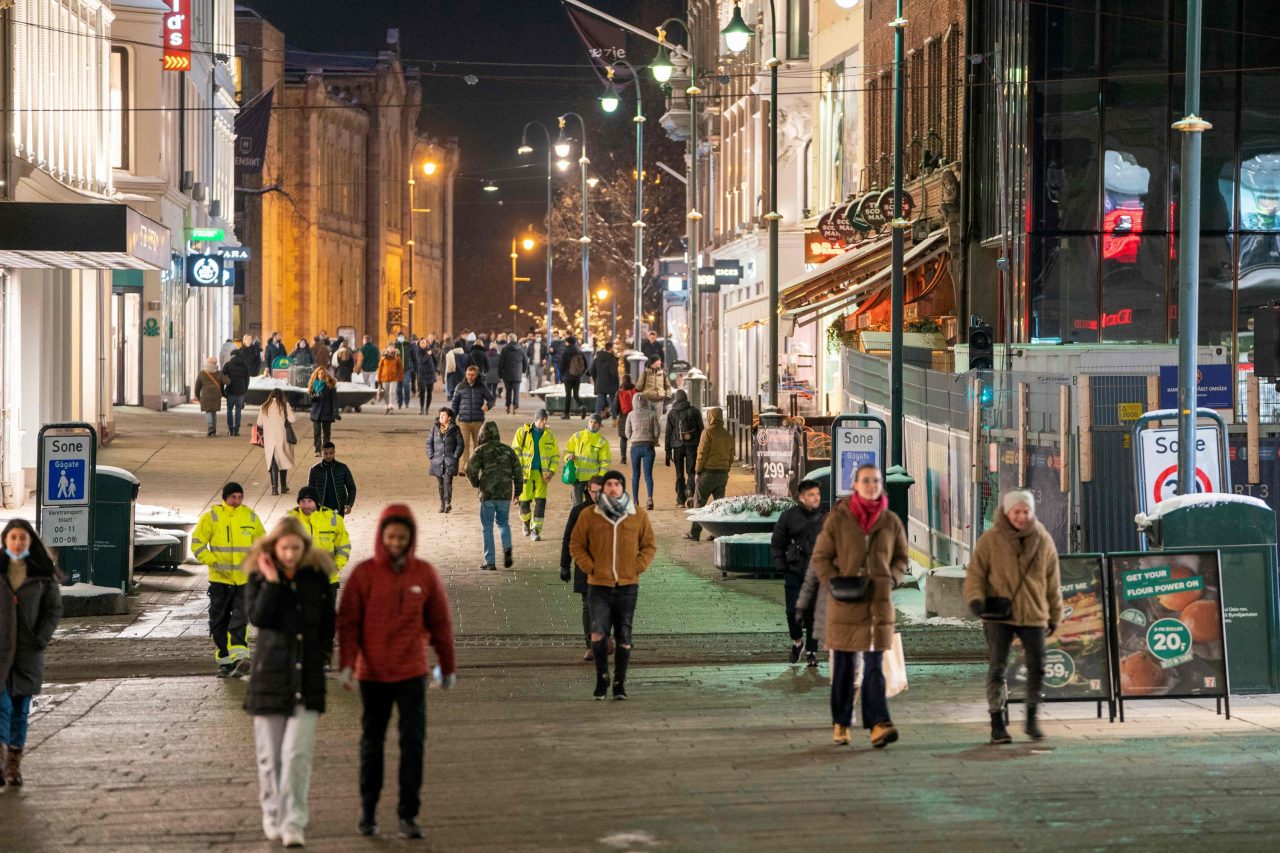 Many European nations have decided to follow Denmark’s lead, seeking to provide some relief to their coronavirus-weary populations amid a surge in infections and some doubts about the safety of reopening.

Europe is rapidly easing coronavirus restrictions in the hopes of bringing a sense of normality back to people’s lives, despite a surge in infections caused by the highly contagious omicron variant that triggered alarm and chaos last year.

A number of states have already announced the lifting of curbs, with Denmark taking the European Union lead Tuesday by scrapping most pandemic restrictions as the Scandinavian country no longer considers COVID-19 “a socially critical disease.” Officials say the reasoning behind the Danish move is tied to the country’s high vaccination rate and the fact that despite omicron surging, it is not placing a heavy burden on the health system.

Prime Minister Mette Frederiksen told Danish radio it’s too early to know if virus restrictions ever have to make a comeback.

“I dare not say that it is a final goodbye to restrictions,” she said. “We do not know what will happen in the fall, whether there will be a new variant.”

European nations elsewhere had a patchwork of different approaches, with some relaxing virus measures. Last week, England lifted almost all domestic restrictions: masks are not mandatory anywhere, vaccine passes are not required for any venue and people are no longer advised to work from home. The only legal requirement is to self-isolate after a positive COVID-19 test. Ireland has dropped most of its restrictions and the Netherlands also has been easing its lockdown.

Norway scrapped a slew of COVID-19 restrictions late on Tuesday, including limits on serving alcoholic beverages and occupancy caps on sports and entertainment venues. Bars and restaurants are toasting to the end of a prohibition on alcohol sales past 11 p.m. Sports and other recreational activities can resume in full without restrictions, while cinemas, theaters and churches are seeing their crowd limits lifted.

France also began lifting coronavirus restrictions including mandatory outdoor mask-wearing Wednesday, dividing opinion as the country only last month reported record COVID-19 infections. Audience capacity limits for concert halls, sporting matches and other events were also removed, and although homeworking will no longer be mandated it is still recommended.

The move begins a two-part relaxation of curbs announced at the end of January – despite the country hitting record levels of daily cases last month.

France “will be able to lift most of the restrictions taken to curb the epidemic in February” thanks to the new vaccination pass, which replaced the health pass, Prime Minister Jean Castex said in January. Since last month proof of inoculation records have been required for the new passes, needed to access everything from bars and restaurants to long-distance public transport.

Previously, the health pass could also be obtained with a recent negative COVID-19 test, a possibility the government ended in its bid to convince more people to get COVID-19 jabs. The second stage of the curb-lifting will see nightclubs, shut since December, reopen on Feb. 16 and standing areas will again be allowed at concerts, sporting events and bars, according to Agence France-Presse (AFP).

Eating and drinking will also be permitted in stadiums, cinemas and public transport from then. Paris has not made the easing of restrictions conditional on the progress of the health situation.

Authorities view the threat of the omicron variant as limited and less dangerous than previous strains of the virus, even though it is more contagious.

“We have seen a weak reversal of the trend over the past few days, with fewer cases declared each day than seven days earlier,” government spokesperson Gabriel Attal told France Info radio Tuesday.

An average of 322,256 cases were recorded over the previous seven days, according to the latest figures, compared with 366,179 a week ago. Attal called it a “very encouraging signal” but said officials “remain cautious” because of a “very contagious” sub-variant of omicron that appears to have delayed the peak of infections in other countries.

Sweden will lift pandemic restrictions next week despite record levels of infections as it banks on booster shots and high rates of past COVID-19 infections to keep hospitalization rates manageable.

Current restrictions, which include bars and restaurants having to close early and a cap of 500 people inside larger indoor venues, were extended last month until Feb. 9.

“It’s time to open Sweden up again,” Swedish Prime Minister Magdalena Andersson told a news conference. “Looking ahead, infection rates will remain high for a while longer, but as far as we can judge, the worst consequences of the contagion are now behind us,” she said.

Fueled by the more contagious omicron variant, Sweden has repeatedly set newly daily case records over the past month that has strained the health care system, although to a lesser extent than in previous waves.

Sweden stood out early in the pandemic by spurning lockdowns, mainly relying on voluntary measures focused on social distancing and good hygiene, though somewhat tighter restrictions were gradually adopted in successive waves.

It has seen deaths per capita run much higher than in its Nordic neighbors but lower than most European countries that opted for lockdowns.

Some recommendations, such as getting vaccinated and isolating at home when sick, will remain in place and they will be more restrictive for the unvaccinated, Sweden’s Health Minister Lena Hallengren told the news conference.

Amid increasing evidence that omicron results in less severe disease than previous variants, she added the health agency will also propose that the virus no longer be designated a threat to society, though it would still be closely monitored.

Meanwhile, the Czech Republic will stop requiring COVID-19 passes for entry to restaurants and other service or entertainment venues starting next week, opening them up to unvaccinated people, Prime Minister Petr Fiala said.

The country of 10.7 million, which was hit hard by previous waves of the COVID-19 pandemic, is seeing a record spike in coronavirus cases as the omicron variant spreads. However, officials expect an easing of infections this month.

The Czech Health Ministry reported a record daily tally of 57,226 COVID-19 infections on Tuesday, plus nearly 10,000 suspected reinfections. On Wednesday, a further 43,307 cases were reported and more than 7,000 reinfections on top of that.

The government will also finish mandatory testing in firms and schools from Feb. 18. Measures requiring mask-wearing indoors and limits to the number of people at public events will remain.

The moves follow easing planned in other European countries. Neighboring Austria will allow shops and restaurants to remain open longer and also ease restrictions on the unvaccinated from next week. On Wednesday, Italian Prime Minister Mario Draghi said Italy would soon announce a timetable to roll back its COVID-19 curbs.

While German neighbors have been unveiling their plans for restriction-free life, Berlin has been facing only calls for an end to COVID-19 restrictions, as a government minister said that many rules could fall away next month.

“I hope that in March many protective measures can be withdrawn,” Justice Minister Marco Buschmann said in an interview with the Rheinische Post newspaper published on Wednesday.

This depends on whether “the number of cases falls again from mid-February,” Buschmann said, noting that the nation’s institute for disease control, the Robert Koch Institute (RKI), expects this to happen.

German Chancellor Olaf Scholz is next due to meet the regional leaders on Feb. 16. At the last meeting on Jan. 24, they agreed to stay the course for now.

On the other side of the world, New Zealand will start easing some of the world’s toughest pandemic border restrictions this month but will not fully reopen until October, Prime Minister Jacinda Ardern said Thursday.

Ardern announced a five-step plan to reconnect New Zealand to the rest of the world, beginning with waiving hotel quarantine requirements for its nationals stranded overseas by the pandemic.

“It’s time to move again,” said Ardern, who has been under pressure recently to relax border policies that have been largely unchanged since the beginning of the COVID-19 crisis almost two years ago. “Families and friends need to reunite, our businesses need skills to grow, exporters need to travel to make new connections.”

Ardern said New Zealanders in Australia could return home and self-isolate, rather than going into quarantine, from Feb. 27, followed two weeks later by Kiwis elsewhere in the world.

The option will then be progressively made available to other groups such as skilled migrants, international students, Australians, and eventually all vaccinated foreign nationals. It will involve international arrivals self-isolating for 10 days instead of undergoing a 10-day hotel quarantine monitored by New Zealand military personnel.

Only 800 rooms per month are available under the current system, with demand regularly exceeding supply tenfold. Many New Zealanders have criticized it as too harsh on international arrivals, with business groups saying it was contributing to a labor shortage and crippling the tourism industry.