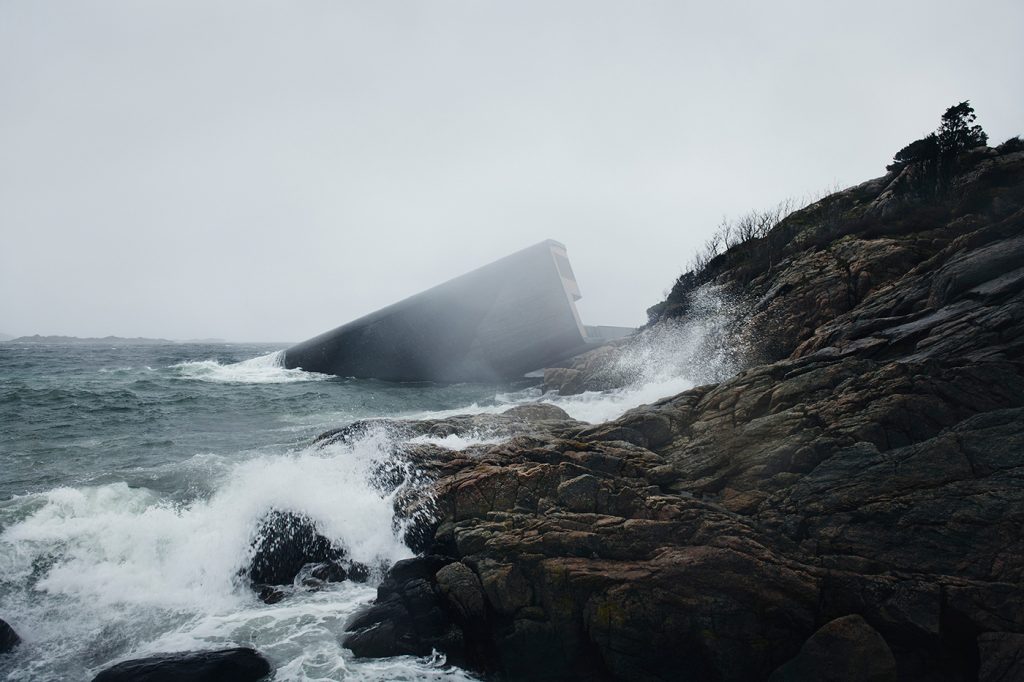 Europe’s first underwater restaurant has opened its “underwater doors” with more than 7,000 diners already booked in to eat among the fish. True it’s not the first in the world, but it is in Europe!

This is no casual eatery – the full 18-course tasting menu with drinks costs up to 3,700 krone (£330) per person. The tasting menu, created by Danish head chef Nicolai Ellitsgaard Pedersen, relies heavily on local seafood, although mushrooms, berries, various seabirds and wild sheep from the surrounding landscape will also be available.

Ellitsagaars described the cuisine as such, “fresh ingredients and pure, naked flavors are of utmost importance to us. At the same time, we want to provide a unique dining experience that ushers our guests beyond their comfort zone.”

The restaurant, sitting at the tip of Norway’s southern coast and partly submerged in the icy waters of the North Atlantic Ocean at five and a half metres beneath the sea, is called Under – which also means “wonder” in Norwegian.

Under is designed by Snoehetta, the Norwegian architecture firm behind the September 11 Memorial Museum in New York. There’s room for around 40 guests in the underwater dining space, which provides ocean views through one giant glass window at the back. The structure was designed specifically to integrate well with its surroundings, especially taking into consideration its geographical positioning and neighboring aquatic life.

The fascination is just this movement from above water to underwater through the building, the big window exposes the underwater not like an aquarium, and it’s the real thing.

‘Under aims to provide a journey into the unknown. By welcoming guests to immerse themselves in the Norwegian marine ecosystem, Under provides a new niche for underwater tourism. Each guest will be given a unique opportunity to experience a submerged universe, exploring marine life in ways they otherwise may never see.’ – Under

Under is owned by the two Ubostad brothers who also have a nearby hotel. Gaute Ubostad said they expect to attract around 12,000 diners each year and of course, the aim is to have 50% of the dinners to spend their night at the hotel.

So dear travelers, for this one, we suggest that you don’t listen to what is said and written. Just grab your luggage, and see and live the experience!

nextThe Glittering Jewel Of The Adriatic