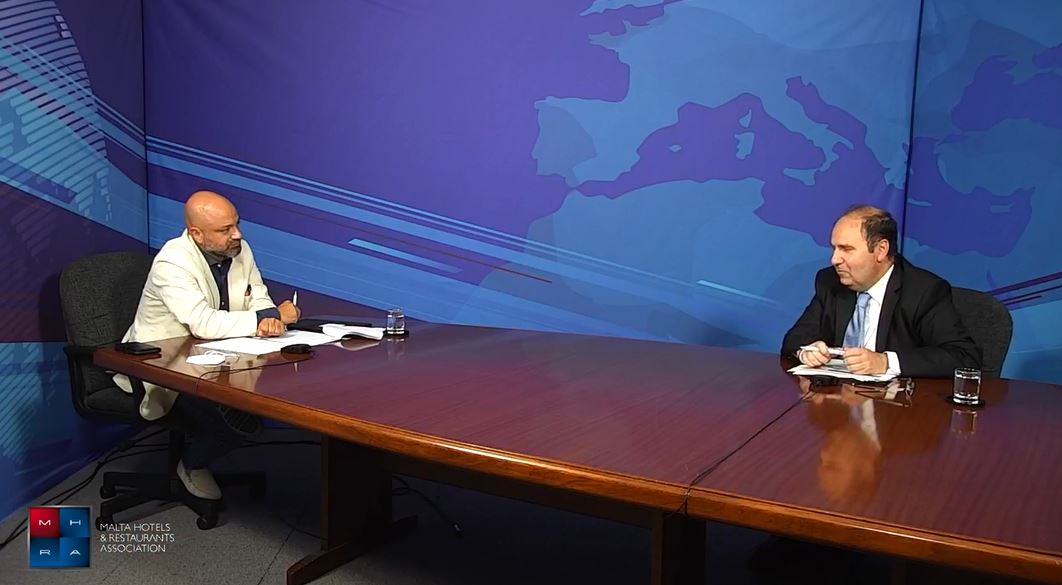 In the latest episode of MHRA Reports, hosted by Malta Hotels and Restaurants Association CEO Andrew Agius Muscat, Bank of Valletta’s Chief Business Banking Officer Albert Frendo spoke on the role of banking in the hospitality sector, particularly as regards its efforts to support the sector during the pandemic.

Mr Frendo, an accountant by profession, is responsible for the stewardship of the Credit Function, overseeing a number of key credit areas including Corporate, SME, Consumer and Trade Finance, Collections and Collateral Management.

Mr Frendo started by pointing out that Malta was among the countries most deeply impacted by the onset of the COVID-19 pandemic due to its heavy reliance on tourism, and acknowledged that the buffer built up over the preceding years served the country well.

He said that so far, the economic damage was contained, yet “fear” existed about the way forward.

“The concern is that once Government subsistence stops there will be a cliff effect, with a number of companies failing together,” he said, “which could lead to another financial crisis.” However, he assured listeners that regulators are “very much on the ball” to avoid a repetition of the 2008 crisis.

Mr Frendo said that while there is no such indication of an incoming crisis, the fluidity of the situation does pose a risk.

Much now hinges on whether this summer will turn out to be a good one, with a bad summer potentially spelling some serious problems.

Asked how the banking sector fits into all this, Mr Frendo sought to make it clear that the bank’s role is to support investment, not provide equity, noting that it has a duty to its shareholders and more so to its depositors.

“If businesses face problems of solvency, it is Government that must get involved, not banks,” he said, making reference to the situation in Spain where the Government injected liquidity into hotels through equity investment.

Rather, Mr Frendo explained how Bank of Valletta has partnered with an audit firm to better understand the dynamics of hotels, looking at monthly or daily profitability, conference bookings as a percentage of the total, occupancy, guest nights, the share of Maltese, foreigner, and guest nights, in an effort to anticipate, customer by customer, how their business model was shaping up.

“Once we understand better, we can provide better solutions to reflect such reality,” he said, noting that the intention of bank is to ensure that its debt is safeguarded, which is best served by ensuring that the solutions it proposes are in line with what is happening on the ground.

“If problems are coming from their own inefficiencies, bad financial management, bad practices, they need to shape up,” he warned, “but if summer is bad, banks need to recognise this fact.”

Mr Frendo further explained that, in his view, “everything goes back to national strategy”.

Mr Agius Muscat referred to a number of MHRA members who feel assured that in a worst case scenario, they would be able to sell their assets, outlining his concern that the value of an asset as valued two years ago may not be the same as its value now. “Does this remind you of the 2008 financial crisis?” asked Mr Agius Muscat.

Mr Frendo agreed, noting that one common argument between banks and their clients is on the question of gearing. He explained that although banks might warn clients that they are overgeared, businesses naturally want to take on greater risk and get loans while the economy’s doing well.

While acknowledging that divestment is an option, he stressed that it typically comes a price.

Mr Agius Muscat followed up by observing that economic history is full of examples showing that the greatest opportunities come where there’s a crisis, asking Mr Frendo whether now is in fact the right time to invest in the tourism sector.

“What happened in this industry,” explained Mr Frendo, is that we are coming out of a phase of huge investment. Over the last three years, some 80 per cent of five-star hotels made significant investments – because the numbers were encouraging.”

“The same applies to four- and three-star hotels.”

In the current context, banks are very careful going forward, with Mr Frendo saying that they would be very selective on what they would support.

“There’s just no visibility. Things could be different in a year’s time, but at the moment we simply do not know how things will pan out.”

Therefore, he continued, those approaching banks for investment loans need to have a stronger case than before.

He pointed to new trends, like remote working, even while abroad, that mean that investment in a better communication framework is a good investment.

“It reflects the new normal,” he explained, and added health, wellness, and digitalisation as examples of such investments.

“However, if the proposal is the building an entertainment hall, one needs to be careful at this point in time.”

“It all comes back to strategy,” he said, noting that a national strategy help direct investors’ actions: “Investment in isolation is risky.”

He said that banks are always looking for entrepreneurs who are not standing still, but looking forward, who are creative, dynamic people.

Mr Agius Muscat challenged him on this point, bringing up common criticism that banks tend to be cautious in their lending.

“So you’re saying that innovation is key,” said the MHRA CEO, “but perception out there is that banks are very conservative. On the one hand, you’re telling people to think outside the box, to present you with new perspectives, but on the other hand, you want proof of concept for new ideas.”

Mr Frendo laughed in agreement, saying, “I have a joke: if someone comes and presents an idea that’s been done before, we ask them what’s new about it. If they come with a new idea, we tell them sorry, this is unproven.”

“But the reality is that banks do finance innovation,” he continued, explaining that while banks are definitely very cautious when it comes to seed capital for start-ups, they have a greater appetite for risk when it comes from established players with proven records of success.

“If you provide a service, but want to provide it in a new, innovative way, banks are much more receptive.”

Turning to the key considerations for the coming months, Mr Frendo drew inspiration from the “revolution” in distribution that emerged from the pandemic.

“A small corner takeaway can now leverage the economies of scale of a large distribution network, by attaching to a stronger channel,” he said, using it as an example of the innovation of humankind in times of crisis.

“The same goes for video conferencing.”

“In the coming months, we will identify the inhibitors to normality, and stakeholders will face a lot of pressure to find quick solutions to difficult problems,” he said.

“But I believe that Malta has a particular ability to innovate, and I look forward to seeing the solutions that will be presented in the near and medium term future,” he concluded. nextTravel to Europe triggers sharp pick up in Air Traffic