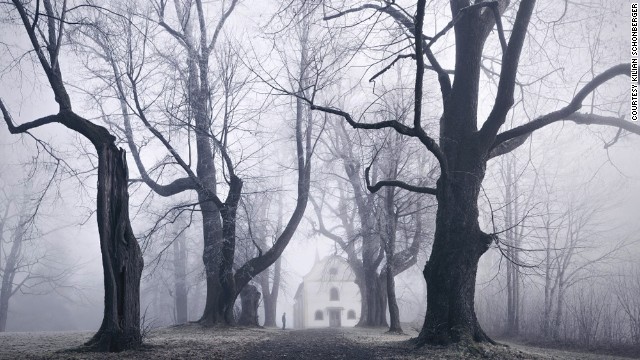 This time of year brings out the dark side in all of us, and the Mediterranean is certainly no exception.

Halloween babies dream of one day travelling to Salem, Massachusetts or New Orleans for the top Halloween experience, but these five Mediterranean locations promise a spooky experience that will send shivers down your spine just the same. That is, if you dare…

This Southern-French city is known for its Halloween celebrations. Locals are particularly keen on storytelling events and street parties to keep international Halloween fans happy. You can even enjoy a Halloween street parade, for which the city’s bars and restaurants remain open to host any hungry ghosts and ghouls.

This is said to be one of the most haunted places in Portugal and is said to be haunted by its former resident, the Baron of Glória. Employees at the attraction have complained of moving objects, sudden closing doors, and bells ringing at random times during the day (and night). The curious thing is, there are no bells in the building…

Built in the mid-1800s, ‘Miranda’ housed patients with mental ailments from 1950 onwards, earning its nickname as Chateau de Noisy. It is mostly abandoned today, but many have dared to violate the building over the years, much to the public’s dismay. Still, a stroll through the area is a must if you’re a Halloween fan, just try not to go alone.

The name of this old fortress means ‘seven towers’, despite the infamous prison having ten. It was originally part of the fourth century city walls, but was closed off in the twelfth century serve as a military fortress to the Ottomans. It was eventually used as a prison in the late 1890s. It even housed political prisoners during the Nazi occupation of Greece, the Greek Civil War, and even during Greece’s military junta between 1967 and 1974. A visit to the fortress today promises spectacular views, despite the heavy sorrow of past inmates following you around every corner.

A stunning 11th century church nestled in the mouth of the mysterious Daveli Cave. ????♥️

Once used as a marble quarry for the Acropolis, the Athenian Cave is said to have been used as a place of worship for the followers of satyr Pan and his nymphs. Daveli’s Cave has long been associated with the occult thanks to reports of water running uphill instead of down, electronics going crazy and apparitions of a cat-like creature walking on two legs who supposedly lives there. Rumour has it that the area was to be used as storage for nuclear weapons in the late 70s, yet who ordered the construction remains a mystery to this day.

previousThis Mediterranean island will be hosting its first ever Aviaton Expo

nextThe MBB's guide to doing business in the EU