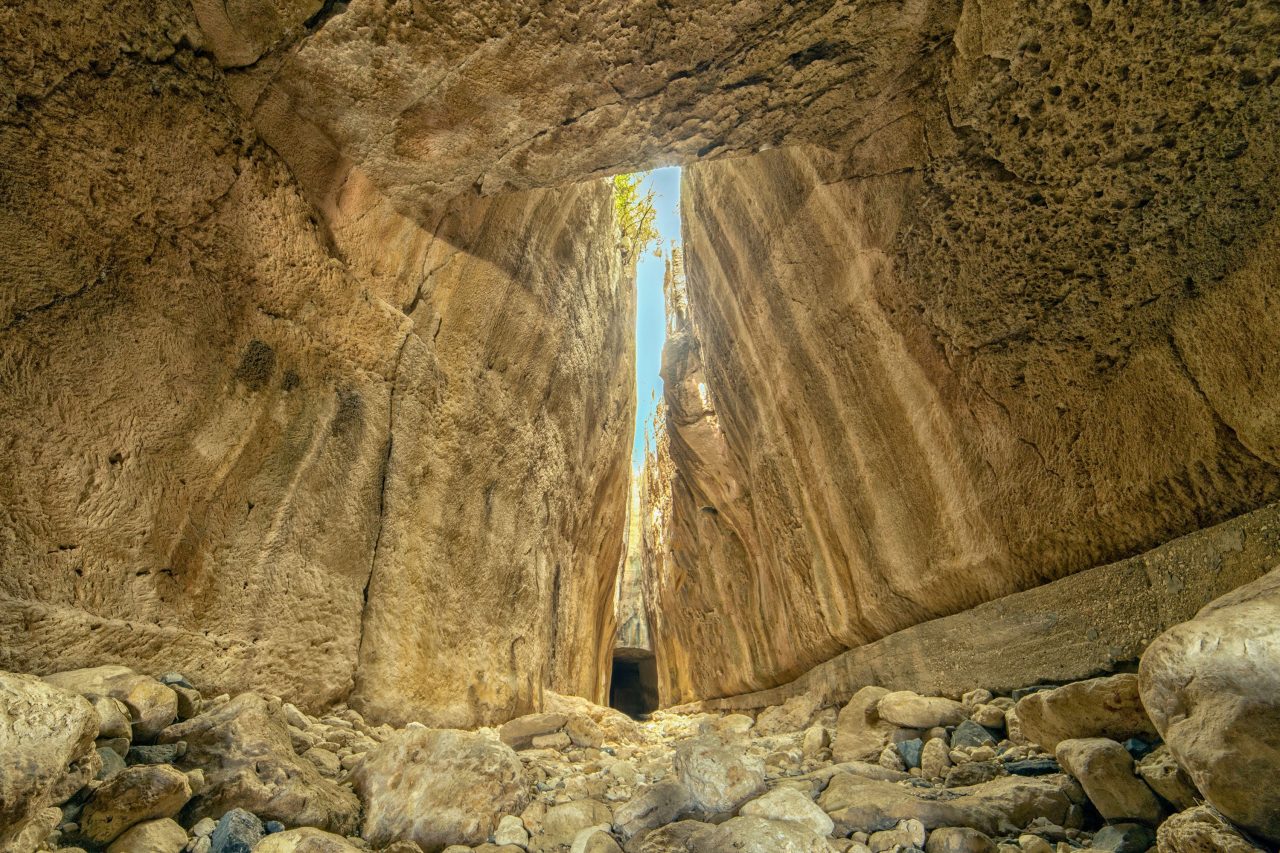 In the Samandağ district of southern Turkey’s Hatay province, the Vespasianus Titus Tunnel, or simply the Titus Tunnel, is a magnificent ancient structure constructed by 1,000 slaves to prevent floodwaters in the area, has been garnering particular attention from tourists.

The Titus Tunnel was a mega project 2,000 years ago carved into the mountain, and it still stands as an unbelievable engineering marvel.

The tunnel, which was built to prevent floodwaters that carried sand and gravel down the mountains from filling the city’s harbor and threatening it, was first conceived by the Roman Emperor Vespasian, who started its construction in A.D. 69. Its construction continued during the reign of his successor and son Emperor Titus and in the times of his other successors. It was finally completed during the era of Antoninus Pius in the second century. It was built by digging the rocks using human resources only.

It hosts an inscription elegantly carved into the rock at the first tunnel entrance that reads the names of Vespasianus and Titus, while there is another one at the discharge tunnel for Antonious. It stands today as a must-see site for anyone that visits Hatay as it takes visitors on a wonderful journey through time.

The tunnel is 1,380 meters (4,527 feet) long with a height of 7 meters and a width of 6 meters, attracting admiration from local visitors and abroad with its architecture in the middle of nature.

It is located at the foot of the Nur Mountains, near the modern village of Çevlik, 7 kilometers (4.3 miles), northwest of central Samandağ (the medieval port of Saint Symeon) and 35 kilometers southwest of Antakya.

Beşikli Cave is also right next to the tunnel, standing only 100 meters away, boasting a particularly flashy architectural structure and decoration. In the cave, there are tombs from the ancient Roman period, believed to belong to a nobleman and his family.

Those who come to visit the tunnel also get the chance to see the tomb chambers here.

Ayşe Ersoy, director of the Hatay Archaeology Museum, said that it was evident from these sites as well that Hatay occupied a significantly important historical and cultural value.

Ersoy stated that the city had hosted several civilizations throughout its history and that now it was receiving great interest from both domestic and foreign visitors. She noted that the Titus Tunnel was one of the most remarkable places in the city. She also said that the number of visitors to the tunnel was increasing day by day.

“The 1,380-meter-long Titus Tunnel, an important Roman ruin of our city, takes its visitors on a journey in time,” Ersoy said and added, “More than 28,000 local and foreign visitors have been to Titus Tunnel over the last eight months in Samandağ.”

Cafer Tayyar Demirci, who came from Gaziantep, said, “Titus Tunnel is a place of a natural wonder; everyone should definitely stop by here.”

Celal Karadavut, who came from Mersin to visit the tunnel with his family, said that Hatay is an important city that has left its mark on history. Karadavut stated that he was pleased to visit the city that has hosted many civilizations. “Hatay is a city that has a different place in Turkey both in terms of history, nature and gastronomy,” he said.

Şükran Naz Karadavut also noted that she liked the tunnel very much and that everyone should see it.

The tunnel was added to UNESCO World Heritage tentative list on April 15, 2014.

previousA how-to for the Perfect Pickle