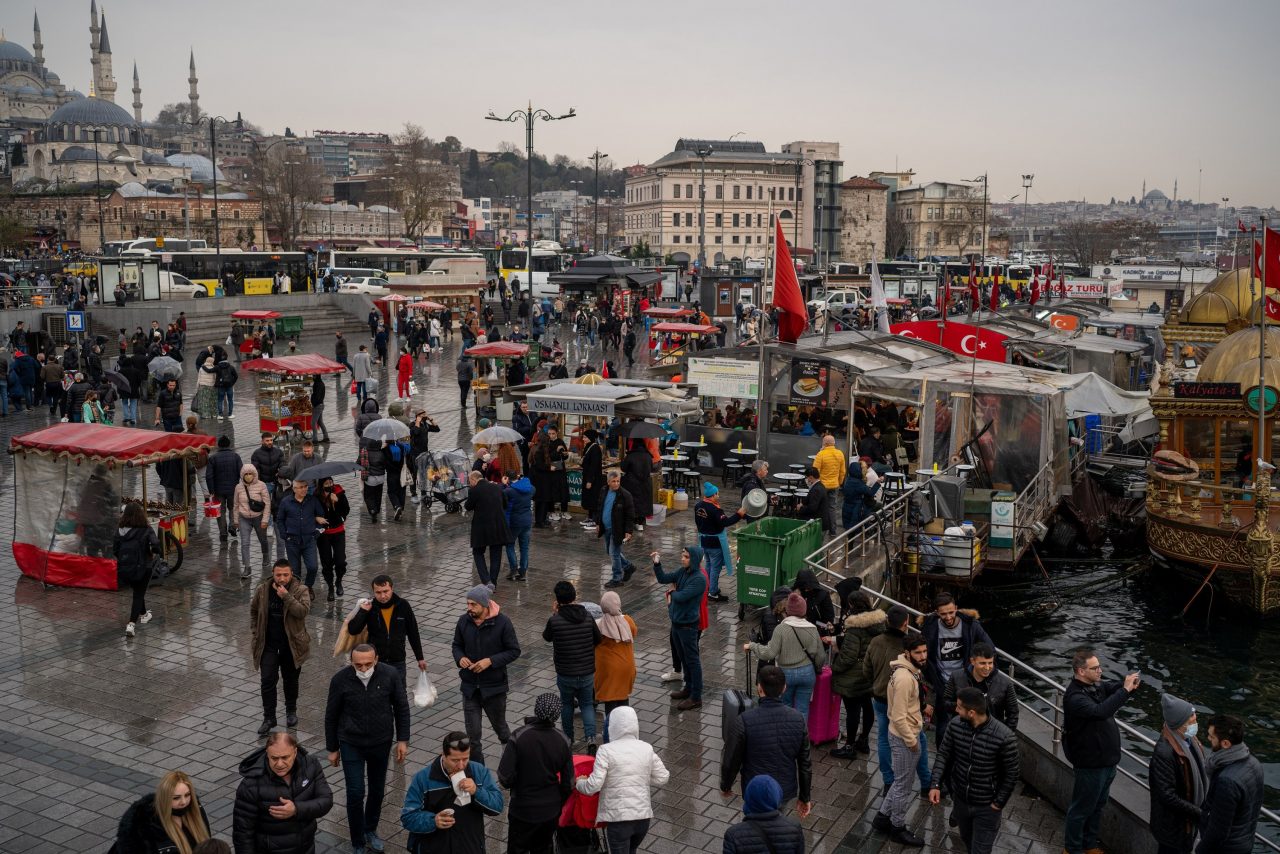 Turkey announced a significant reduction in taxes on basic food supplies Saturday to counter soaring inflation while also unveiling a new credit guarantee fund package and a new model to bring “under-the-mattress” gold into the economy.

President Recep Tayyip Erdoğan said the value-added tax (VAT) would be lowered to 1% from 8% on dairy products, fruit, vegetables and other basic food items. His decision, published in the Official Gazette, is to go into effect on Monday.

“As part of simplifying the VAT system, we are reducing VAT from 8% on basic food products to 1%. We already applied it for flour and bread,” Erdoğan said via videoconference during a Treasury and Finance Ministry press conference on new economic support packages.

In addition to the tax discount, Erdoğan said the government “expects” companies to lower their prices by 7% from Monday to reflect the change. He said these foods play a significant part in inflation.

The government will also create a task force to inspect prices and a mobile app to help citizens find the cheapest goods, Treasury and Finance Minister Nureddin Nebati said at the event.

Official data for January showed consumer prices rose by 48.69% annually, a 20-year high. Food and non-alcoholic beverages inflation topped 55%. The government has pledged to act and vowed to safeguard households against soaring prices.

Erdoğan said the fall in VAT would apply to a host of products, including cooking oil and dried fruit, stressing “all these reductions will help in our fight against inflation.”

“We will not let inflation crush our nation.”

Businesses that do not reflect the VAT reduction in prices will face hefty fines, Trade Minister Mehmet Muş said on Sunday.

“We are taking the necessary measures urgently so that the regulation on reducing VAT on food products from 8% to 1% achieves its purpose,” Muş said on Twitter.

He also noted inspections would be intensified as of Monday.

“The public should have no doubt that we will impose the most severe fines on stores that do not reflect the VAT reduction in prices and aggrieve our citizens with unfair price increases.”

“We will overcome inflation altogether,” Erdoğan said and stressed they “will make sure inflation will drop down to single digits in 2023.” Presidential and parliamentary elections in Turkey are set for mid-2023.

Real sector representatives were fast to react, hailing the tax cut and calling for the companies in food business to engage in the campaign to tame inflation.

“I invite our members who are engaged in food production and trade to support the anti-inflation campaign,” said Rifat Hisarcıklıoğlu, the chair of the Union of Chambers and Commodity Exchanges of Turkey (TOBB).

The move will help to turn the economic wheels faster, said Ankara Chamber of Commerce (ATO) head, Gürsel Baran. “The reduction of VAT on food will contribute to the lowering of inflation figures,” he noted.

The government has been endorsing a model based on lower borrowing costs, saying credit, exports and investment will help the country weather inflation.

To support the drive, Turkey’s central bank had brought down the key policy rate by 500 points since September to 14%, but paused the easing cycle in January.

The Turkish lira has been broadly stable since the start of the year following a 44% decline in 2021.

The lira closed last week at 13.49 against the United States dollar. The record low in December was 18.36. The currency has been hovering around 13.5 since then after the government instituted a new financial tool to push savers away from buying foreign currencies and encourage them to convert their foreign currency holdings to liras with a scheme that safeguards deposits against currency fluctuations.

Nebati said the amount of lira deposits in the scheme to protect them from the effects of depreciation has risen to TL 340 billion ($25 billion).

Erdoğan has been reiterating his view that inflation is caused by high interest rates and stressed on Saturday that the foreign exchange fluctuations did not reflect the reality of the country’s economy.

Because Turkey relies on imports for its energy needs as well as raw materials and many food supplies, prices have soared.

In response, the government raised the minimum wage by 50% for 2022. The prices of gas, power, petrol and road tolls also increased to account for import price volatility.

Electricity prices were raised by as much as 125% for high-demand commercial users and by around 50% for lower-demand households at the beginning of January.

Households, shopkeepers, city councils and religious community groups last week complained about the rising energy costs. The government has said it was working on a rearrangement of energy bills and new measures may be announced soon.

Nebati said Saturday that electricity and natural gas prices, which have been on the rise globally, remained below real prices in Turkey thanks to government subsidies. He asked critics to “be more just.”

On Friday, he said the inflation would fall to around 24% by December and hit single digits by May of next year. He also said financial markets have settled and that the government may introduce an inflation-protected deposit scheme if needed.

The government will monitor the use of the funds to make sure they finance production and exports, in response to complaints that companies previously used such credit packages for consumption and other purposes.

KGF is designed to stimulate the economy by guaranteeing loans to small- and medium-sized (SME) companies.

Also Saturday, Nebati announced a step to encourage people to bring in the gold that they have been saving and urged households to bring their “under-the-mattress” gold holdings, estimated to stand around 5,000 tons, into the banking system.

He said 1,500 gold drop-off locations would begin operation on March 1 to integrate the precious metal into the financial system as deposits.

The scheme aims to ensure part of the $250 billion to $350 billion worth of gold held by households finds its way into the domestic saving system, Nebati was cited as saying after meeting investors in London last week.

Some of this will support the central bank and meet the needs for foreign exchange, he said.

The minister noted that some 10,000 jewelers will join the gold delivery points by the end of this year.