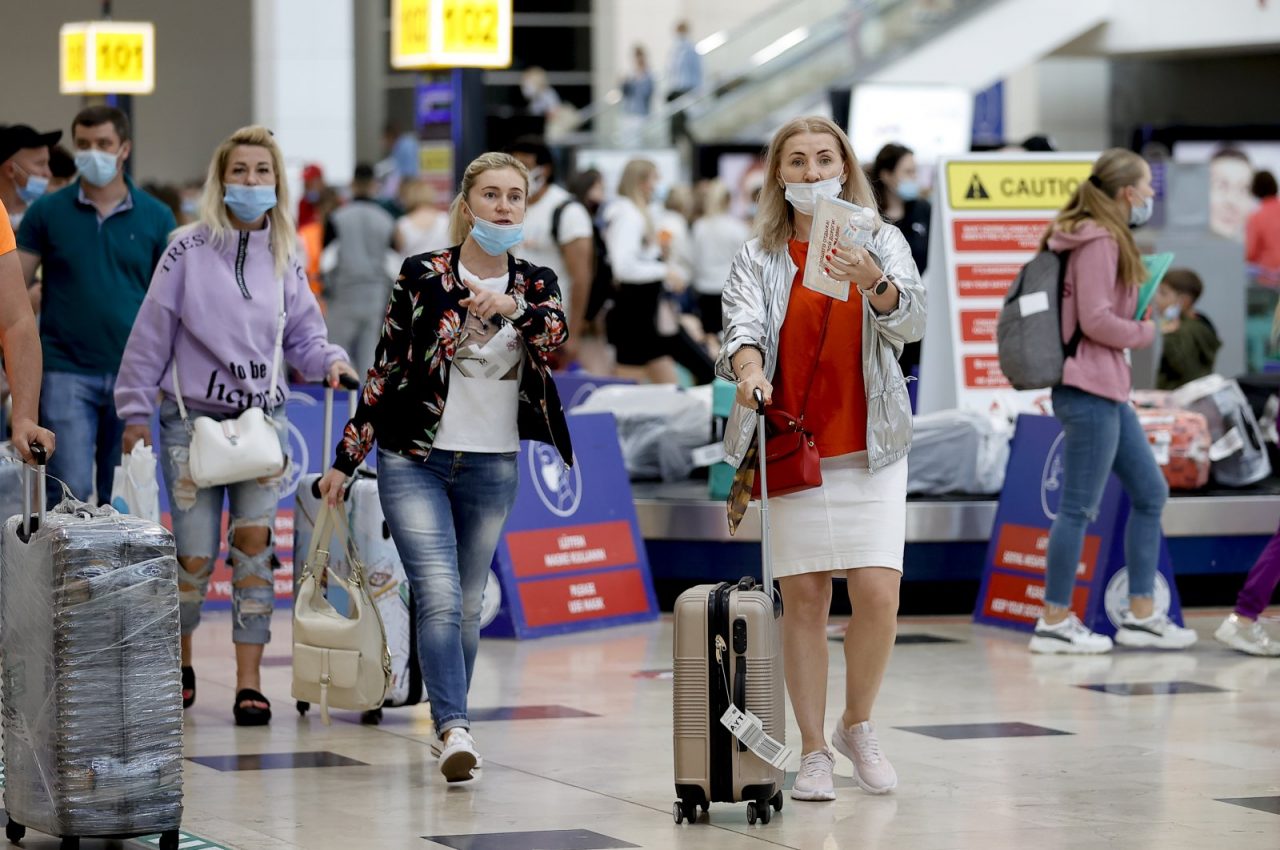 Thousands of Russian tourists began arriving in Turkey on Tuesday, boosting hopes for its tourism sector after a two-month suspension in flights imposed by Moscow due to concerns about a surge in COVID-19 cases in April.

Turkey’s tourism prospects have been revived by a sharp fall in daily coronavirus cases to around 5,000 from a peak of more than 60,000 two months ago, as well as an acceleration in vaccinations to more than 1 million a day.

The first plane arrived in the southern resort city of Antalya from Moscow around dawn, carrying 132 passengers.

The tourists got off the plane, passed through thermal cameras and entered the airport before they were transported to their hotels.

Some 12,000 Russians were expected to arrive on 44 planes in the Mediterranean tourist hub of Antalya on Tuesday, Anadolu Agency (AA) said.

Oleg Uvanov, one of the passengers, said he is on holiday with a friend who lives in Antalya.

Uvanov expressed pleasure for having arrived in Turkey after the lifting of the restrictions and added, “I want to get rid of the tiredness of the whole year, have a nice holiday and return (to Russia).”

Alexandra Donskaya, another tourist, also said that they were looking forward to a holiday and immediately bought their plane tickets when the restrictions were lifted.

The Russian tourist underlined that they love Antalya and Turkey and that she came with her family and wanted to have a nice holiday in a warm city.

Viktorina Zeiena, another passenger, said she is very happy to be in Turkey. Up to 3 million Russians to arrive

The head of the Association of Tour Operators of Russia (ATOR), Maya Lomidze, said as many as 3 million Russian tourists could arrive by the end of September.

“Maintaining booking and price dynamics, as well as the absence of additional restrictions on coronavirus, the flow of tourists from Russia to Turkey (including Antalya, resorts in the Aegean and Istanbul) could be about 3 million people from June 22 to the end of September,” Lomidze was cited as saying by Sputnik.

She said this figure includes passengers who were unable to travel between April and June.

The “high season” could continue through October in case of appropriate weather and price conditions, Lomidze noted.

“The 2021 summer season will be better for Turkey than last year in terms of Russian tourist flow,” she said.

“The season started in June, not August. The geography of the flight has been expanded. In 2020, flights to Turkey began with seven cities, before the list was expanded to 21 cities. This year, there is permission to fly from 32 Russian cities to Turkey.”

The ATOR head also said many Russian tourists were seeking to switch their domestic tours with a trip to Turkey.

“They are changing Russian resorts, there are demands regarding this, but it is difficult to specify numbers yet,” Lomidze said.

She confirmed that 44 flights were coming to Antalya on Tuesday, bringing in around 12,200 tourists.

Some 2.13 million Russians visited Turkey last year, the highest level of any country but down from 7 million in 2019.

Russia halted most flights to Turkey on April 15 and said last week they would resume on June 22. Mehmet Işler, the deputy chairperson of the Turkey Hoteliers Federation (TÜROFED), stressed the immediate effect of the flights from Russia.

“There is a massive demand for the Turkish coast. Our air traffic is up 30% from day one,” Işler noted, saying they expect around 3 million Russian tourists this year.

“We forecast about 3 million tourists from Russia and about 6 million from its neighbouring states,” he added.

“There is a booking boom. We expect this to increase even more in the coming days.”

The number of German visitors fell to 1.1 million last year, from more than 5 million in 2019.

Tourism revenues dove by two-thirds to $12 billion (TL 104.35 billion) last year and made a weak start in 2021 as COVID-19 restrictions continued to hit an industry that usually accounts for up to 12% of the economy and is key to curbing the current account deficit.

Şimşek forecasts that the market for British tourists will open after mid-July and that the tourism season will extend to the end of November, but that a full recovery would take longer.

“I don’t think it will be possible to make up for the losses of the last two years in the next six months. It will only be possible to do so when everything returns to normal in 2023.”

Due to lower expectations, the percentage of hotels open this year should reach around 90% by July, compared with 50% that opened last year.

“For the month of July, we are planning 75 additional flights. We’re very happy with the developments as a company,” said Turkish-German joint carrier SunExpress CEO Max Kownatzki.

“Currently, there is a great interest in the cities of Antalya, Bodrum and Dalaman in Turkey,” the company said in a statement.

previousSpain to follow France and the Netherlands, in Lifting Outdoor Masks Rule