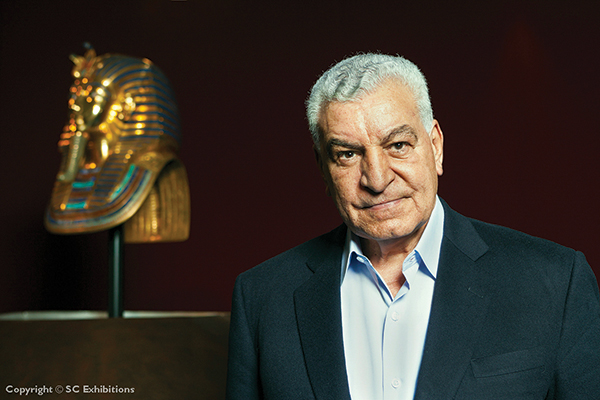 Dr. Zahi Hawass is a world-renowned Egyptologist, who although always wanted to be a lawyer fell into this line of work when a new department of archaeology at the Faculty of Arts in the university where he was studying, was opened.  He worked at the Supreme Council of Antiquities and after realising that this wasn’t what he wanted to pursue, he moved to Menya, in Middle Egypt, in the middle of the desert.

Following that, he was then assigned again to be an inspector to supervise the excavations at Kom Abu Bellou, which is a site dating to the Greco-Roman Period in the Delta. During this experience, Dr. Hawass learned how to brush away the dust carefully to uncover artifacts. One day, he discovered a statue in a shrine in the middle of a tomb, and at that moment, he found his true love… archeology.

Dr. Hawass believes in the importance to preserve our culture and monuments because, without them, we will have no future and no identity. He helped restore and preserve Pharaonic, Coptic, Jewish, and Islamic monuments in Cairo and across Egypt. He also organized a site management plan to accommodate between the needs of tourism and the preservation of monuments. These programs in addition to excavations helped uncover the secrets of Egypt and boost tourism.

Recently, Egyptians started to hold dearly their national heritage and have became more interested in their history. When Dr. Hawass sent a robot to explore the so-called air shaft inside the Great Pyramid, people stayed up from 3-5 AM watching the event live on national TV.

Everyone is now interested in the history of Egypt. All over the world, you find people are holding dearly their heritage and the heritage of Egypt as well. When asking him about what major differences he sees between the people of today and their 2000-year-old counterparts, he believes that there is a huge difference.

In ancient Egypt, the entire population of the country was working towards one national project, that is the building of the Great Pyramid, for example.

They all participated and cooperated towards that goal. Till today, there are no national projects that would bring together all Egyptians.

We need to cultivate the appreciation of culture in one’s country. Dr Hawass suggests that this can be achieved by preserving the culture and the monuments and by developing an interest in one’s history through educational programs for children. In fact, he developed a program at the Egyptian Museum to educate children about their past, giving tours to children at the Pyramids of Giza and the Sphinx, and also published several children’s books to excite their interest in their heritage from a young age.

previousThe Mediterranean - A Hub For Faith