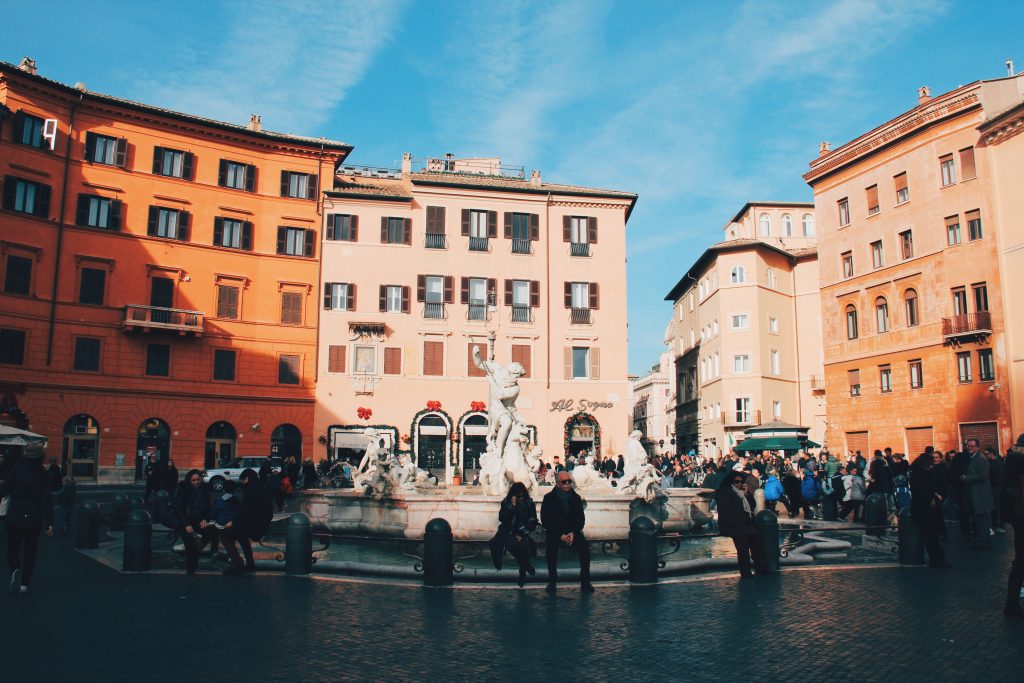 Rich in culture and history, Rome is one of those cities that are a must to visit in one’s lifetime. It’s quite a transfixing feeling whilst walking through the ruins of an empire that once was the centre of the world. It’s inspiring art and architecture adorning the vibrant streets, Rome has a way of stealing your heart with its abundance of romance and charm. Rome’s cityscape is quite a sight. With ancient ruins such as the Pantheon, Colosseum, and Roman Forum, it’s not hard to remember the city’s golden age, where it was known as the capital of the world, ‘caput mundi’.

On the other hand, a number of basilicas show the history and the importance of Rome when it comes to the Catholic Church. St.Peter’s Basilica can be seen towering over the Vatican city, showing the ambitions of popes past during the Renaissance age and the architects that changed architecture. Around the city, a number of piazzas, such as Piazza Navona, are flourished with breathtaking fountains that add more charm to the city’s picturesque streets. Only a few cities in the world can rival Rome’s artistic heritage. Throughout the course of history, the city was the centre stage of a number of upheavals of Western art. Giving birth to artists and continuously inspiring them to push the boundaries that they were caged in during their time. This has resulted in the city to attain countless priceless treasures.

A myriad of artistic movements beautifully merge together harmoniously and embellish the city’s streets. Whilst walking through the city, unintentionally you will stumble upon works by the world’s greatest artists. From paintings by the great Caravaggio to frescos by Raphael to sculptures by Michelangelo to fountains by Bernini. Do As The Romans Do

A trip to the eternal city is not just about soaking in the art and culture. It’s also about experiencing the lifestyle, famously labeled as ‘la dolce vita’. Idly walking around the picturesque streets, sipping an espresso at a streetside cafe, sitting in a piazza in good company and just people-watch during the day. In the evenings, things are turned up a notch. Bars start to fill up, and people go to cafes for a little aperitif.

Eating, without a doubt, is an essential part of experiencing Rome. With romantic settings and tantalizing food, as a good time is definitely in store! From fine-dining to trattorias, there is definitely something for whatever mood you’re in. But we’re going to leave that for another time because we feel that Roman food deserves an entire post on its own.

previousBrexit - Keeping Businesses In The Unknown

nextWhen A City Becomes A Cinema