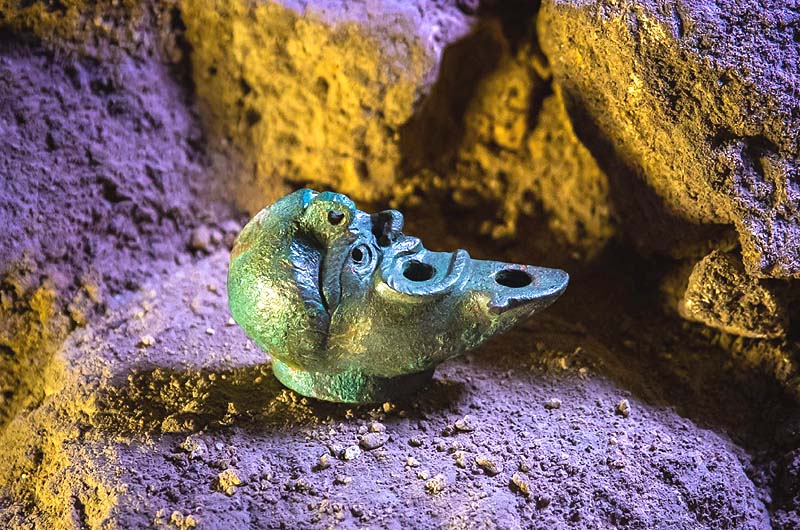 A rare bronze oil lamp, which is believed to be the first discovery of its kind in Israel, was uncovered recently during excavations of the City of David’s Pilgrimage Road in Jerusalem.

Israel Antiquities Authority archaeologists say that the artefact, dating back to the Roman period after the destruction of Jerusalem and the Second Temple in 70 CE, was deliberately buried in the foundations of the building as a “foundation deposit” intended to bring good fortune to the building’s residents.

“The building where the lamp was discovered was built directly on top of the Pilgrimage Road at the end of the Second Temple period. The construction of such a massive structure in the period after the destruction of Jewish Jerusalem demonstrates the importance of the area even after the destruction of the Second Temple. It is possible that the importance of the building, and the need to bless its activity with luck by burying a foundation deposit, was due to its proximity to the Siloam Pool, which was also used in the Roman period as the central source of water within the city,” said archaeologist Ari Levy, director of the excavations. Half of the lamp was unearthed with archaeologists hoping to find the other half. The artefact is shaped like the face of a bearded man which is described in the statement from the Israel Antiquities Authority announcing the find as having a “grotesque appearance.”

An unusually preserved flax wick was found inside the lamp when the artefact was taken for treatment and preservation in the metal laboratory of the Israel Antiquities Authority.

previousTravel expected to pick up pace after cautious restart