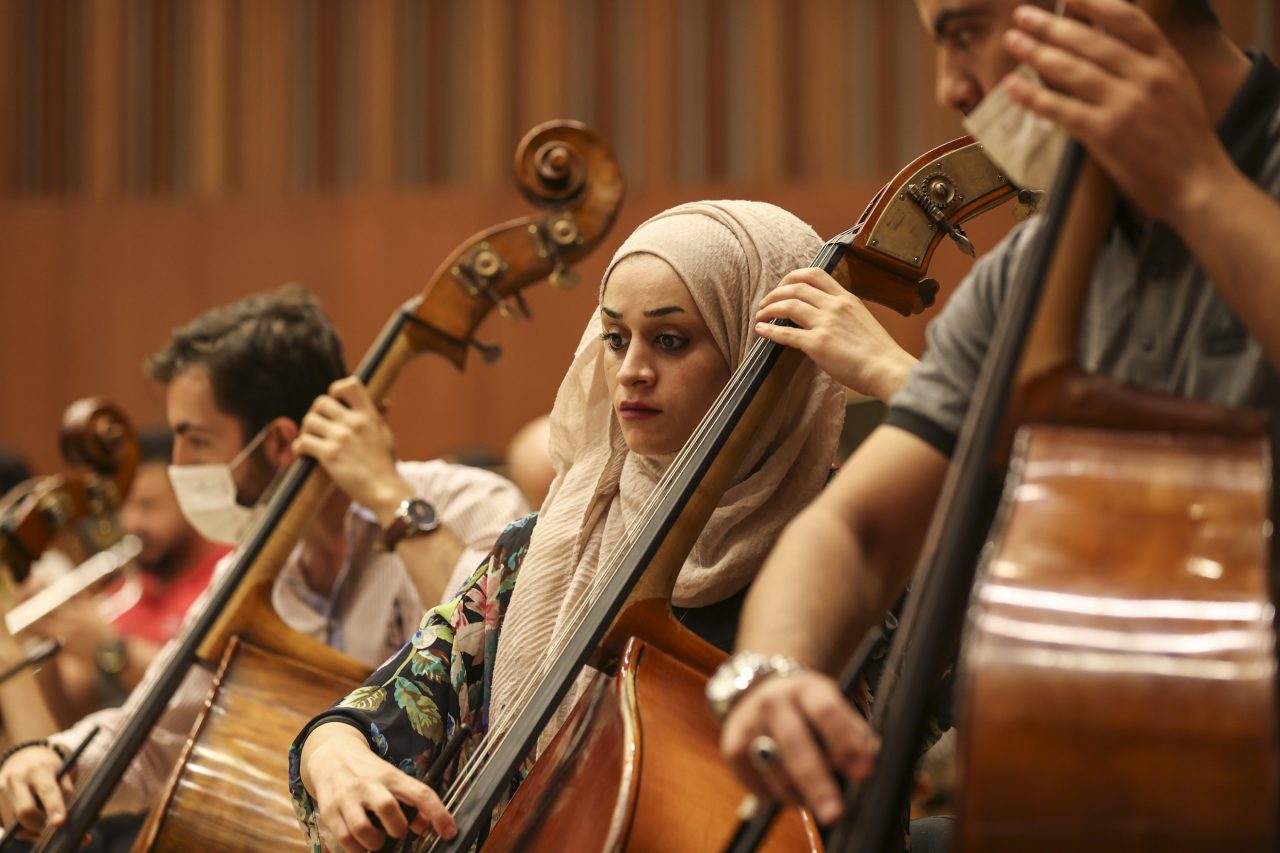 The Palestinian Youth Orchestra, which also includes Mariam Afifi – the symbol of the Palestinian resistance – has completed its preparations for the “Palestine-Turkey Peace Concert” that will be held at the Presidential Symphony Orchestra (CSO) on July 19.

Before the concert, young Palestinian musicians will be hosted by President Recep Tayyip Erdoğan’s wife, first lady Emine Erdoğan, at the Presidential Complex.

In a phone conversation with Palestinian artist Afifi, who was taken into custody by being dragged by her hijab while defending Al-Aqsa Mosque during Israel’s attacks on the Palestinians in May 2021, first lady Erdoğan said, “She stated that she would be happy to see the Palestine Youth Orchestra in Turkey.”

After the meetings held with the Edward Said National Music Conservatory, which is a part of the Palestine Youth Orchestra, it was decided to organize concerts in Turkey’s Istanbul and Ankara in cooperation with the CSO.

The musicians of the Palestinian Youth Orchestra, who came to Turkey under the auspices of the Ministry of Culture and Tourism, had an intense preparation period for the concerts.

At the concert, the first of which will be held on July 19 at the CSO Ada Ankara Historical Hall, the world premieres of two works that are composed for peace will be made. For the first time, “Rhapsody of Anatolia” was composed by Yusuf Yalçın and “Dance of Altos” by Palestinian Bishara Kell for the “Peace Concert” where folk melodies of the two countries will be blended.

The youth orchestra consists of 80% Palestinian while 20% are Turkish musicians. Fecir Alptekin, the president’s chief adviser, told Anadolu Agency (AA) that the Palestine Youth Orchestra was established to bring together Palestinian musicians who were dispersed all over the world as a result of the exile in 1948.

Alptekin stated that the concerts in Turkey will be organized with CSO Chief Can Deliorman.

Noting that Emine Erdoğan will host the members of the Palestine Youth Orchestra at the Presidential State Guesthouse on Monday, “After her phone call with Afifi, they will meet face to face for the first time. The concerts will be performed later,” she added.

Palestinian youth from 10 countries came to Turkey as part of the concert. “It is important to be aware of them. Emine Erdoğan’s invitation to them is very valuable and the presence of Palestinian youth in Turkey is of worldwide importance,” Alptekin said.

Fecir Alptekin emphasized that all efforts to preserve Palestinian traditional culture are being attempting to be prevented and that the Palestinian musicians’ call for peace must be given from Turkey.

Palestinian artist Afifi also stated that they are struggling with the pressure applied to them by taking advantage of the unifying power of music.

Afifi said: “We want to make ourselves and our country’s name heard in Turkey. We want to make our voices heard all over the world, with the unifying power of music, against the boycott, bans and the attempt to erase the name ‘Palestine’ in our country. We aim to end this boycott.”

CSO Chief Deliorman also stated that there are very talented young people in the Palestine Youth Orchestra and they are very excited about their music.

Deliorman stated that the young people were trained by academics during their stay in Turkey, and Palestinian musicians showed rapid development. “We are giving a message of peace here, we are calling for peace,” he added.

Saying that the invitation from the highest authority of the Republic of Turkey was very special, Khoury added: “We are very pleased to be here. It is the greatest invitation that we have received. There has been great solidarity between the two countries. Our cultures are already very close. It is a very important opportunity.”

“We organized a very special program for here. We learned the two important Turkish works at the same time. These have become very important works that entered our repertoire in our country, in our schools,” he said.

The orchestra will be performing “Kürdilihicazkar Longa” by Kemani Sebuh Efendi and Aşık Veysel’s “I’m on a long and narrow road.”