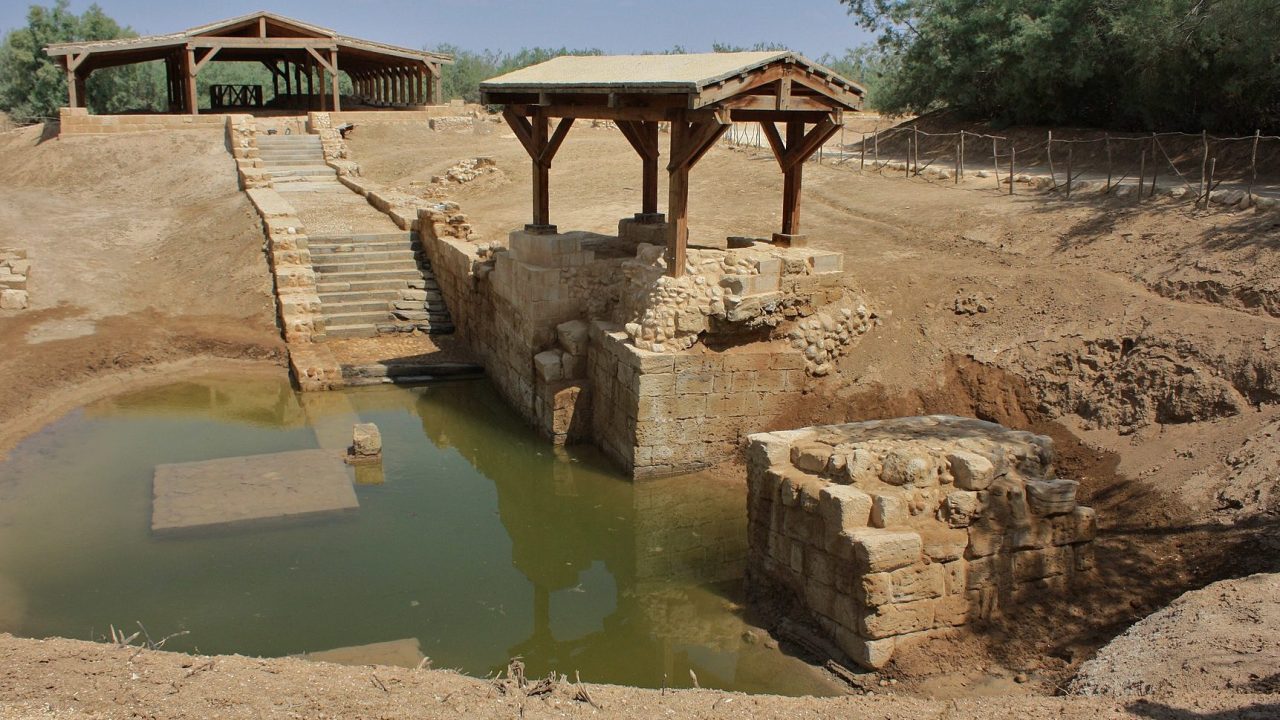 Egypt, Jordan and Israel are busy preparing for the future, investing significant funds and efforts into improving important religious and heritage sites.

Despite the cautious optimism expressed by many countries’ tourism ministries and tour operators throughout the region during the summer, COVID-19 remains, and the tourism sector in all of the Middle East is bleeding.

Some countries, such as Israel, are not allowing in foreign tourists in order to prevent virus variants from spreading, while others receive just a fraction of the floods of tourists they used to host just two years ago. Nevertheless, Egypt, Jordan and Israel currently are busy preparing for the future, as they invest significant funds and efforts into the improvement and refurbishment of important religious and heritage sites.

But it remains to be seen whether the Middle East will succeed in attracting faith tourism and fulfill the enormous potential of this global trend.

Religious tourism accounts for more than half of all incoming tourism to Israel. According to the Israel Ministry of Tourism’s 2019 Inbound Tourism survey, 53.9% of all tourists were Christians, 25.6% Jewish, 2.6% other religions and 1.4% Muslims, with the remainder not expressing any religious affiliation. Some 18.8% of all incoming tourists defined their visit as a pilgrimage, with about a quarter of all tourists arriving for touring and sight-seeing.

“Promoting the tourism of Christians, Muslims and Jews from all over the world to the Holy Land is one of the most important tasks in my role as Minister of Tourism. Religious tourism builds bridges between people and countries, strengthens our international and diplomatic ties, and is an important anchor for inbound tourism,” Yoel Razvozov, Israel’s minister of tourism, told The Media Line, underlining the growing importance of faith-related travel to Israeli tourism industry.

“The Ministry of Tourism will continue to invest many efforts and resources in strengthening, improving and making the significant tourist centers accessible to all religions. I am confident that on the day that tourists are allowed to enter the country, we will be able to host here, in our beautiful country, hundreds of thousands of tourists from all over the world,” Razvozov said.

“Israel has amazing beaches, but it has to keep in mind that there are beaches everywhere – in Greece, in Dubai and in Egypt. However, it’s difficult for other countries to compete with the abundance of important religious sites,” George Horesh, a veteran tour guide and an owner of the Alma-Israel travel agency, told The Media Line.

“I believe that there is a great potential for religious tourism. In fact, despite the prognosis that predicted the decline in religiosity, what is happening is just the opposite. Religiosity is on the rise in many places in the world; that’s why Israel, as well as Jordan and Egypt, are trying to attract these tourists,” he said.

Horesh believes that, in order to succeed in this task, Israel has to invest in repair and refurbishment of many important Christian sites that for years were neglected by respective Israeli governments.

“The sites in Tiberius and Capernaum need to be attended to urgently. The roads, the guest facilities, the entrance – today it just doesn’t look good. Also, the tour guides should receive better training; in my time the guides went through meticulous instruction on Christian and Muslim theology, while today the training is very short and few are really knowledgeable on these issues. To lead a group of pilgrims the guides also need to address the nuances of theology, not merely repeat the facts,” he said.

A spokesperson at Israel’s Ministry of Tourism told The Media Line that “during the pandemic period the ministry and other bodies have invested significantly in improving religious tourism infrastructure.”

Sites that received upgrades include: Megiddo National Park; the multimedia presentation at the Saxum Visitor Center; excavations at Magdala; new accessible paths at the Garden Tomb; the Northern Ramparts walk in the Old City of Jerusalem; the excavations in the Korazim National Park; the Emmaus and the Korazim-Capernaum trails; and spaces for prayer services at national parks such as Banias, the Good Samaritan, Avdat and Kursi. An extension to the Western Wall Tunnels, exposing new archaeological excavations, also will open soon, according to the ministry.

Jordan has suffered an enormous blow to its economy due to the pandemic, leading to the closure of over 60% of the country’s travel agencies. But the kingdom did not waste any time, investing funds in restoring and promoting faith-related sites, hoping that tomorrow will be better than today.

“The Baptism Committee, which is managed by Prince (Ghazi bin) Muhammad, is making a great effort to preserve the whole baptismal site. The DOA (Department of Antiquities) recently announced the (improvement of the) site of the cave of Zoar in the Dead Sea where Lot and his daughters lived and sought refuge after Sodom and Gomorrah,” Jordanian tour operator Sami Tawil told The Media Line.

In addition, Jordan currently is discussing the possibility of opening the Sunni Islam-majority country to Shiite pilgrims. The tombs of Jaafar, cousin of the Prophet Muhammad and brother of Caliph Ali, who is believed to be the first leader of the Shiites, has long been out of reach for Shia faith tourism.

In Egypt in recent years, the government has been investing heavily in the restoration of Christian, Muslim and Jewish holy sites. The ancient mosque Nabi Daniel in Alexandria, as well as the Shaarei Shamayim Synagogue in Cairo have been restored, and Egypt recently announced plans to restore and renovate the shrines and tombs of the Prophet Muhammad’s family across the country to support and promote religious tourism.

“Also, there are plans to generate Christian tourism to Egypt, where The Holy Family (of Jesus, Mary and Joseph) lived after fleeing King Herod’s persecution. The government is now investing in The Holy Family Trail, a path that connects many stops in Cairo, the south and Sinai,” Amr Zakaria, a Cairo-based expert and scholar, told The Media Line.

The first stops of the Holy Family Trail were completed in January. The trail will eventually include 25 stops.

Between economic needs and security concerns

While it’s clear that Middle Eastern countries are working hard to attract as many tourists as possible, even the prospect of profit sometimes is not enough to diffuse security concerns and suspicions.

Though the Abraham Accords that were signed by Israel, the United Arab Emirates and Bahrain in September 2020 included a section stating that “all peace-loving Muslims would be allowed to pray at the al-Aqsa Mosque, and the other holy sites in Jerusalem would be open to peaceful believers of all religions,” the influx of Muslim tourism to Israel is yet to be seen. In times of pandemic all forms of tourism remain very limited, and still it seems that Israel is not about to be awash in tourists from Muslim countries with whom it does not have diplomatic relations (however, Indonesian Christian tourists have been coming to Israel for many years).

In addition, there is fierce opposition to Iranian Shia faith tourism in countries such as Jordan and Egypt. Many Jordanians have expressed opposition to the idea of opening the country to Iranian tourism due to security and faith concerns.

Many Egyptians share this view. “Any tourist can visit our mosques – Al-Azhar, Al-Husseim or Al-Hakim (mosques that also have religious significance for the Shia), but Egypt never wanted Shia pilgrimages to these sites. During the days of the Muslim Brotherhood, the Iranians suggested starting religious tourism to these sites, but even then Egypt declined, for fear that they would proselytize and promote the Shia faith here,” Zakaria said.

All experts agree that cooperation between Egypt, Jordan and Israel is important in order to promote religious tourism and for the countries to enjoy an influx of tourists.

“During the ‘90s there used to be a package deal that included all three countries. I think that all of us could benefit from it,” Zakaria said.

“Jordan is part of the Holy Land, and most of the time is sold as an extension to both countries, so yes, and always there are packages that include at least two countries,” Tawil said.

“There are tour operators, mainly in source countries such as South America and India, that market multi-destination packages that include Jordan and Egypt,” according to the Israeli tourism ministry.

The work on ancient sites revered by millions of Christians, Muslims and Jews around the globe will continue, and the tour guides, the drivers, the translators and the hoteliers will patiently wait for the moment when the pandemic vanishes and the shrines, churches and mosques will be filled again with multilingual and multiethnic tourists.