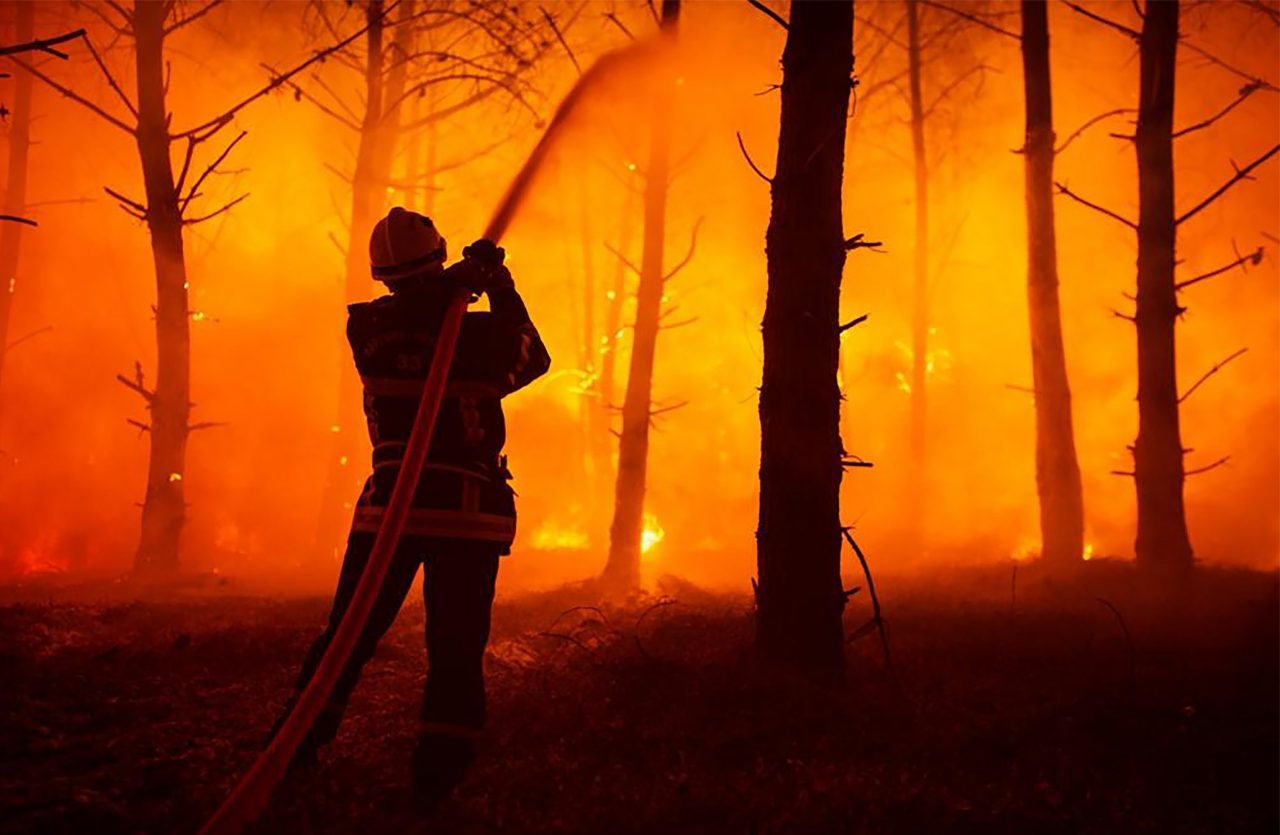 Record temperatures are being seen across the U.S., triggering health alerts for more than 100 million people, as fires that have torched Europe are on course to make 2022 a record year for forest loss on the continent

A relentless heat wave in United States that has triggered health alerts for more than 100 million people is set to intensify this weekend, with temperatures and humidity forecast to surge to suffocating highs in many parts of the country.

The devastating heat – which has also hit Europe, causing hundreds of deaths there – highlights the direct threat climate change poses to even the wealthiest countries on the planet.

“So far this week, 60 daily high temperature records have been tied/broken as dangerous heat enveloped much of the Nation,” the National Weather Service (NWS) said in a tweet Thursday morning

“More records are likely to be set over the next week,” it added.

Temperatures in large parts of the southwest U.S. have soared to over 38 degrees Celsius (100 degrees Fahrenheit), topping 110 degrees in some areas. Similar levels were recorded across the U.S. south, where humidity compounded the discomfort.

The NWS tweeted Tuesday that 100 million people were under heat-related warnings and advisories, and said on Thursday that a “significant portion of the population” would remain under such warnings over the weekend.

Already high temperatures were set to rise further this weekend across the east coast of the United States, where high humidity could push “feels-like” temperatures well above 38 degrees.

Washington and Philadelphia have both declared heat emergencies and warned their residents to remain vigilant.

Philadelphia’s Department of Public Health warned in a statement that “during hot weather, NEVER leave children and pets unattended in vehicles under any circumstances.”

While the oppressive heat is expected to subside in the U.S. south and east next week, a high-pressure system over the Pacific Northwest is expected to push temperatures above normal levels.

In Texas, residents were asked last week to reduce their power consumption by not running major appliances from 2 p.m. to 8 p.m., as the southern state’s electric utility warned that low windspeeds threatened the grid reliability.

New York City on Thursday asked residents to use less energy by raising their air conditioning to 26 degrees and unplugging appliances.

Scientists have warned that heat waves like the ones being felt in the U.S. and Europe will become more frequent and rise in intensity due to global warming.

Though he campaigned on an agenda of robust action against climate change, U.S. President Joe Biden’s biggest plans have been stymied by the Supreme Court and lawmakers, including from his own Democratic party.

Biden announced in a speech Wednesday that his administration would redouble efforts to address global warming but stopped short of declaring a formal climate emergency, which would grant him additional policy powers.

The fires that have torched through Europe are on course to make 2022 a record year for forest loss on the continent, as scientists warn climate change is already contributing to ever fiercer blazes.

Fires in parts of France, Spain and Portugal have already burned more land so far this year than in all of 2021 – some 517,881 hectares (5,000 square kilometers), or the equivalent area of Trinidad and Tobago.

“The situation is much worse than expected, even if we were expecting temperature anomalies with our long-term forecasts,” Jesus San Miguel, coordinator of the European Union’s EFFIS satellite monitoring service, told Agence France-Presse (AFP).

San Miguel said there could be worse to come, adding that the hallmarks of global heating were all over this year’s fire season. “Ignition is caused by people (but) the heat wave is critical, and clearly linked to climate change,” he said.

“The fire season used to be concentrated from July to September. Now we are getting longer seasons and very intense fire. We expect climate change to create higher fire conditions in Europe.”

Temperatures have warmed just over 1 degree Celsius (1.8 degrees Fahrenheit) since the industrial era, and the United Nations says the Earth is currently on track to warm some 2.7 degrees Celsius this century.

This additional heat is enough to make the kind of heat waves that baked Europe this week more likely to occur and to last longer when they do.

EFFIS said that Europe could end 2022 with more land burned by area than 2017, currently the worst recorded year for wildfires with nearly 1,000,000 hectares lost.

This week temperatures topped 40 degrees Celsius for the first time on record in Britain, where a relatively high 20,000 hectares have burned since January.

A study in February found that the proportion of July and August days of extreme fire risk in Britain would increase from 9% currently to 26% with 2 degrees Celsius of warming.

Mark Parrington, head scientist at the EU’s Copernicus atmospheric monitoring service, said climate change had already contributed to how long wildfires last when they break out.

“What is remarkable is just how long they burn,” he told AFP. “This is not the kind of thing we typically see in Europe.”

Hotter temperatures combined with near-unprecedented drought conditions across much of Europe contribute to making forests tinder dry, providing the ideal conditions for wildfires to start and then spread.

“There is a lot of fuel,” said Parrington. “In central and Southern Europe there is a clear upward trend for fire risk.”

As well as damaging ecosystems and removing carbon-absorbing vegetation from the land, wildfires themselves contribute to climate change by emitting greenhouse gases such as carbon dioxide.

Copernicus this week said fires in June and July in Spain and Morocco had produced some 1.3 million tons of carbon dioxide – the highest of any equivalent period since records began in 2003.

The blazes also affect air quality for nearby populations. In southwest France, elevated levels of nitrogen dioxide have been noted for days over the city of Bordeaux, just north of two major burn areas, and even in Paris, some 500 kilometers (310 miles) northeast.

previousMHRA | Tourism recovering well, but innovation is key for a sustainable future