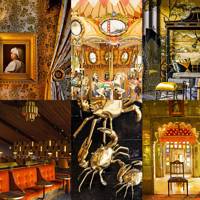 Gilded interiors across the planet are a reminder to look towards the light. These are our favourite gold-dipped spots to take inspiration from. A gilt-framed painting from the British School peers out at Chatsworth House in Derbyshire, home to the Duke and Duchess of Devonshire. At the Palace of Versailles, the grand Hall of Mirrors glows at sunset. Originally built as a fruit stand in 1921, the Nut Tree in Vacaville, California, has since become a major roadside pit-stop with restaurants, shops and a nostalgic, lit-up carousel. In Bangkok’s Tep Bar, shots of ya dong, a herbal Thai moonshine, are served on a metallic tray with pickled mango. In Taipei, rich tones and burnished trims decorate Staff Only Club, one of Taiwan’s first private-members clubs, hidden in a former soy-sauce factory. A short walk away from Four Seasons at Chao Phraya River is Stella, the amber-accented cocktail bar of the new Capella Bangkok hotel. Meanwhile, on the French Riviera, the honey-hued marble walls at Villa Kerylos in Beaulieu-sur-Mer are a reference to the aristocratic houses built on the Greek island of Delos in the second century BC. Kitsch maneki-neko, or lucky cats, line a wall at Ho Lee Fook restaurant in Hong Kong, and are believed to bring good luck to the owner. Bali’s bohemian treasure trove The Jungle Trader sells pieces by local artists as well as traditional crafts such as crab ornaments inspired by the island’s wildlife. At Udaipur’s City Palace, parts of which remain a royal residence, sunlight filters through colourful blocks of stained glass to illuminate a mirrored room. Back in Versailles, smooth marble, plush velvet and gilded bronze flow in vaulted symmetry throughout the palace’s Royal Chapel. At Venice’s Teatro La Fenice, which has seen numerous premieres of operas by Rossini, Bellini and Verdi, 174 boxes covered in gold leaf are a throwback to the opulence of the city’s 18th-century nobles. Design firm Yabu Pushelberg has divided the space with tall metallic-tinted mirror and glass installations in The Beaufort Bar at London’s Savoy Hotel, £38,000 worth of gold leaf adorns the alcoves and cornicing. In California, gilded holiday house Acido Dorado’s mirrored walls and ceilings reflects the Joshua Tree desert inside and out.