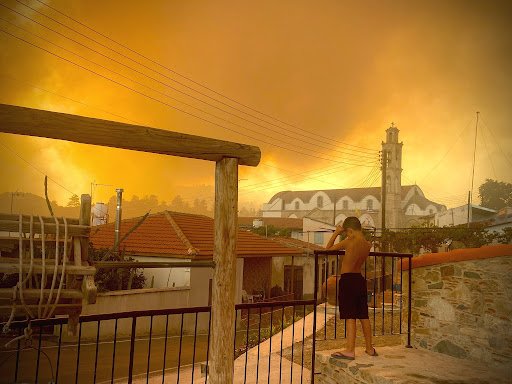 This week, the Foreign Ministers of Greece,, Cyprus, and Israel reiterated their commitment to trilateral agreements and cooperation.

The head of the Cypriot diplomatic service revealed one of the topics discussed, beyond the already staple diet of defence and natural gas, would be collaboration in firefighting.

The three agreed a fact-finding committee needs to be established to explore sharing of resources, especially when rushing to each other’s aid to help tackle the infernos that continue to destroy the environment and the economy.

There is even talk of turning this into a cross-border structure that would include EU and non-EU resources to put out the flames.

Fortunately, the early-July fires in Cyprus were controlled by superhuman efforts of mostly local forces, within a few days, making air support from Italy or other EU member states pointless.

On the other hand, the fires in Greece, which erupted on various fronts and ravaged for weeks, required airborne and ground-based teams from neighbouring countries. Greece has a fleet of custom-made firefighting aircraft, albeit aged, as does Israel, with Egypt and other nearby countries also invested in this area.

As commendable and mandatory as the concept for multi-lateral cooperation might be, this is not the solution.

Fires, exacerbated by global warming, have a chain reaction on sectors we have taken for granted too long, with some politicians even looking at climate issues superficially.

The changing conditions have caused havoc to the farming and tourism-based economies of the Mediterranean basin.

Academic research has shown that 2000-2018 was the second-driest period for the southwest U.S. in the past 1,200 years, exceeded only by a megadrought in the late 1500s.

Climate deniers are simply pushing the inevitable down the road.

A temperature rise, as ascertained by leading researchers at the Cyprus Institute more than a decade ago, will force the island to extend its tourism season to start earlier in March and end later in November, with August very soon becoming unbearable and out of bounds to vacationers.

Rising temperatures are redrawing the maps of Europe’s vineyards, pushing winemakers further north and upsetting brewers’ plans who can no longer rely on natural cooling for fermentation of their trademark beers.

The same applies to Cyprus that has already seen significant changes in the Mediterranean sea life, impacting the fishing industry.

Farmers will probably have to experiment with new crops to produce food that can withstand higher temperatures and less water.

Instead of going from one trilateral meeting to another and setting up working groups that more often include technocrats instead of experts, Cyprus should take the initiative by reviving its Forestry College and upscaling it into a pro-active academic and research institution.

Such a university of environmental and climate issues will advise governments on future economic planning based on weather conditions.

Buying and sharing water-bombers is simply a reactive approach.

It is unnecessary, but it merely satisfies politicians who want to show they are spending EU taxpayers’ funds appropriately.

Before the next mega-crisis hits, it’s time to see the bigger picture and do something about it. nextTourism to Turkey up nearly 200% on 2020, but still lower than Pre-Pandemic Numbers