Zeta co-founder Aditi Shekar has spent the past three years tracking the ways couples share and manage their finances, from each card swipe to every split bill. Her effort led to tens of thousands of couples signing up for a free budgeting app experiment. Today, those learnings have been formed into a venture-backed startup.

Zeta is a new fintech platform that helps couples join their finances. Zeta isn’t creating the concept of joint accounts; it’s simply trying to rebuild them for the modern family. Currently, joint accounts lack transparency or the option to add multiple users that come from different relationships in your life. Many standard joint accounts just give every user entire access to other users’ finances, versus tiered ways to spend.

Off that vision, Shekar and her co-founder Kevin Hopkins have raised $1.5 million in a round co-led by Deciens Capital and Precursor with participation from executives from Chime, Square, PayPal, Venmo, Google, Facebook and Weight Watchers. Shekar says that 57% of its cap table is women or people of color.

“In some ways, we see ourselves as part of a replacement for Venmo,” Shekar said. “We saw couples Venmoing back and forth to each other sometimes six times a day…we want to take over your money chores.” While Zeta is entering the market as a tool for couples, Shekar sees the startup’s moonshot as being the go-to operational account for any modern household.

A tool like Zeta is trying to give already existent transactions — begging for a rent check, splitting the grocery bill, going halfsies on dinner, giving allowance — an easier way to be completed.

In reality, the startup works as a First Republic or Chase replacement, providing a digital layer of banking services that can integrate with pre-existing bank accounts. Couples who download Zeta will each get a Zeta joint card and a joint account to layer atop their finances. The joint card will serve as the way that couples can spend from the same account.

So far, users use their Zeta account in two main ways: have it take over standing bills such as rent or mortgage, or have it serve as a savings account for mutual goals, such as a post-COVID trip or big shared purchase like a car or home. Users can direct-deposit as much money as they want from their main bank accounts into Zeta, and then use the Zeta debit card to swipe couple money instead of individual money.

“There are a lot of fintechs that will go after the direct deposit,” Shekar said. “But we really thought about Zeta as the layer on top of existing accounts so you don’t have to move everything over.”

Similar to Chime, Zeta makes money from interchange fees, the cost it takes for a merchant to process your payment, on card transactions. A portion of the interchange fee is paid to Zeta, and a portion goes to your bank.

“If you and your partner wanted to share rent and pay bills together we’d be the natural place to plug into,” she said.

Braid founder Amanda Peyton breaks down the concept of multi-player, social finance into two phases: if 1.0 was Venmo, then 2.0 will “enable sharing money at the account and transaction level,” she says.

“I think about it this way: The current set of mainstream financial products supports my money and your money. Social finance 2.0 will be all about our money,” Peyton said.

“Banks have historically prioritized growing their own customer base. They haven’t invested a lot in products that promote sharing money, regardless of where your primary checking account lives…Zelle is a noticeable exception here,” she said. “And it’s not hard to see why, there’s little tangible benefit for them to do so.”

Zeta differentiates from Braid in that it is solely focused on couples and families, which lets it do things like pay bills and save money to plan for the financial future. Shekar says that it plans to support families in broader ways over time, such as being part of taxes or prenuptial agreements. That said, Zeta currently only supports two people per account, while Braid already has the capability to add multiple parties to its joint account.

The biggest hurdle for Zeta is if people trust each other enough to get into operational accounts with each other to do it. Individualism isn’t just a lazy reaction to lack of tooling out there; for many people, keeping your money to yourself is a preference. Of course, the flip-side of shared finances is dealing with the repercussions of ending that relationship if life gets in the way.

“Break-up was the first feature we ever built,” Shekar said. Right now, there are no clear ways that Zeta can define what happens to the money in the shared account if people break up (no, there’s no clause that requires you to split money down the middle).

The startup is thinking about adding a feature during on-boarding that asks users what they prefer happens “in the event of a closure.” 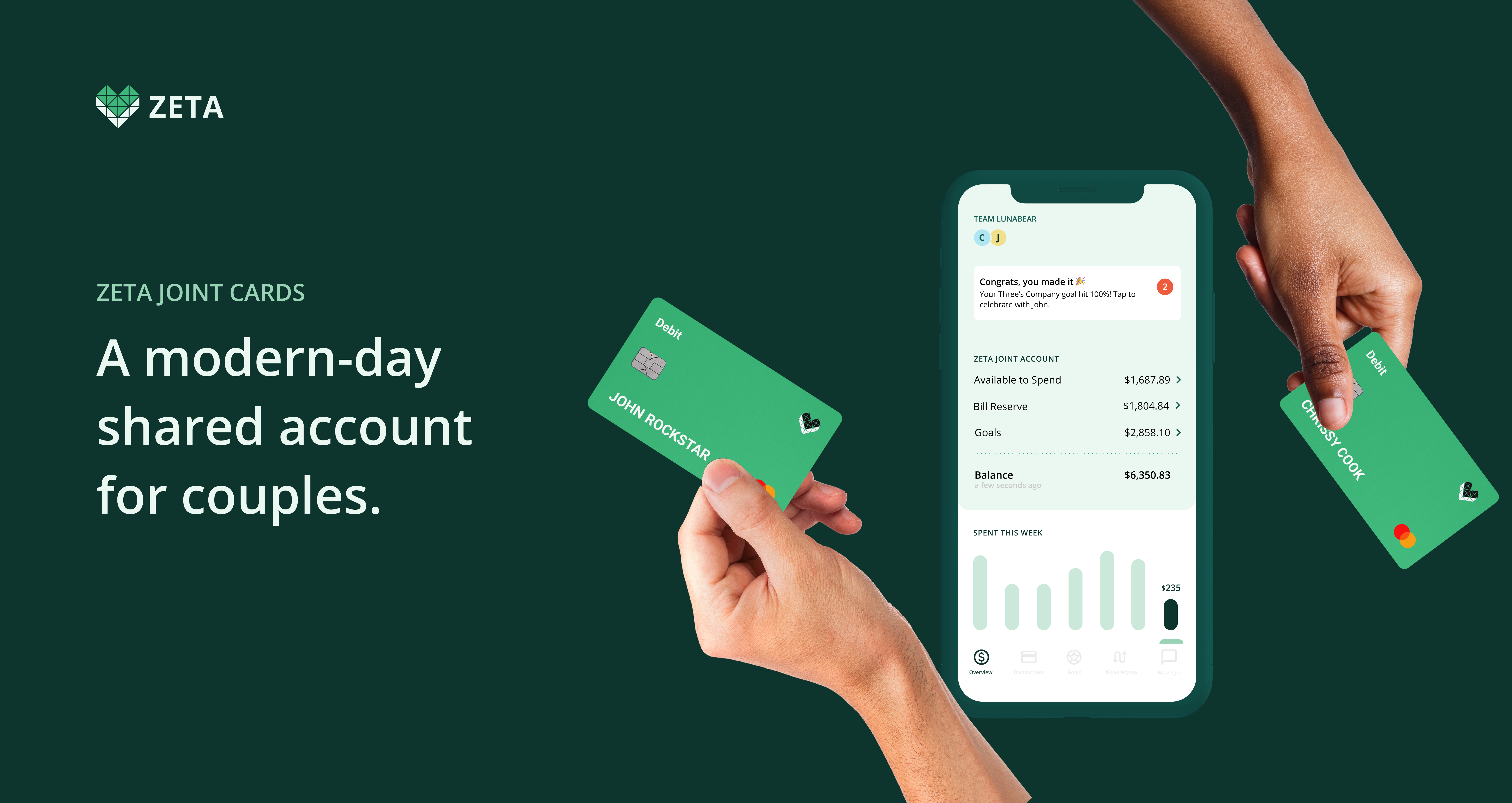