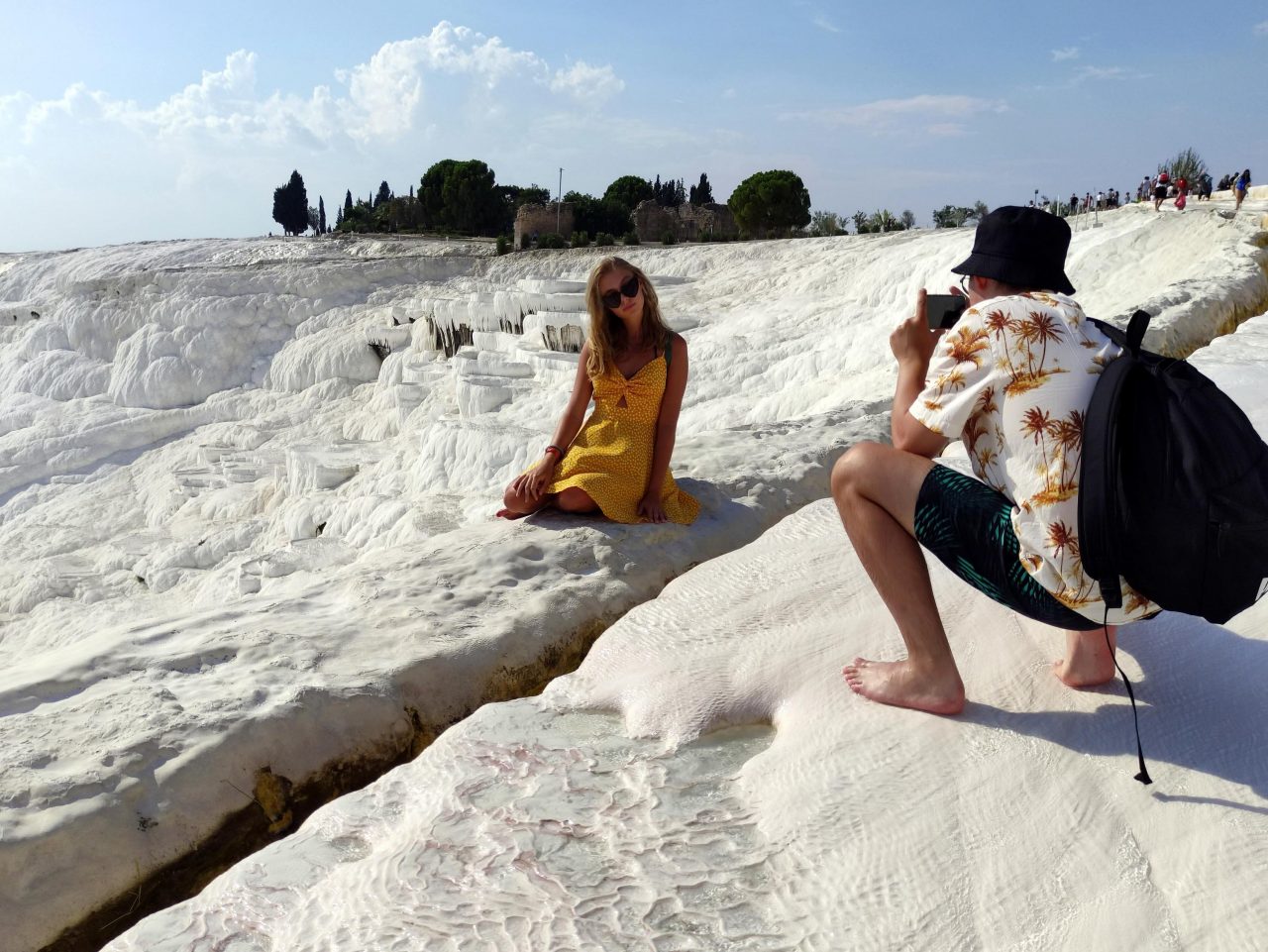 Droves of vacationers have flocked to the UNESCO World Heritage site Pamukkale, known as the “white paradise,” in western Turkey’s Denizli province. The amount of visitors has nearly doubled compared to last year despite the ongoing COVID-19 pandemic, giving a much-needed morale boost to the local tourism industry.

Some 786,387 vacationers visited Pamukkale between Jan. 1 to Aug. 31. The Hierapolis Archeology Museum, in particular, has attracted 11,683 visitors and the ancient city of Laodicea, also known as Laodicea on the Lycus, located 15 kilometers (9 miles) from the museum has welcomed 25,643 tourists in the same period.

In the same period last year, some 393,509 tourists had visited the Pamukkale region.

The region is particularly famous for its natural spring, situated in close proximity to the white travertine terraces. Dating back to ancient Hierapolis, this pool formed naturally after the collapse of a series of columns in an earthquake in 692 A.D., which caused thermal water to accumulate.

Tourism representatives, meanwhile, are keeping their hopes high, foreseeing a further increase in the numbers next year.

Denizli Tourist Hoteliers and Operators Association (DENTUROD) Chairperson Gazi Murat Şen told Anadolu Agency (AA) that Pamukkale is almost leaving a “feast” in terms of the density of the visitors.

Saying that the demand toward the region is high despite the pandemic, Şen noted that this mobility was driven by the vaccination against the outbreak.

“Our white paradise has started to return to its old fame,” he said, as both domestic and foreign tourists have again begun to flock to the region this year like in pre-pandemic times.

Pamukkale has hosted over half a million visitors in the first eight months of the year, Şen said, and reservations are continuing to be made.

As for the primary markets, he said most tourists have come to the region from Ukraine, Germany and South America.

Since now the case numbers are also dropping, “we expect that Pamukkale to be one of the most visited spots in Turkey next year,” he said.

“Tourism representatives expect the flow of visitors to continue unabated due to the increase in demand for thermal regions in the autumn months,” he said.

Turan Köseoğlu, chairperson of the Pamukkale Regional Executive Committee of the Association of Turkish Travel Agencies (TÜRSAB), meanwhile, expressed that they are already approaching their target of 1 million tourists.

“Tourists from all over the world flock here. 2021 is a good year for Pamukkale,” he said.