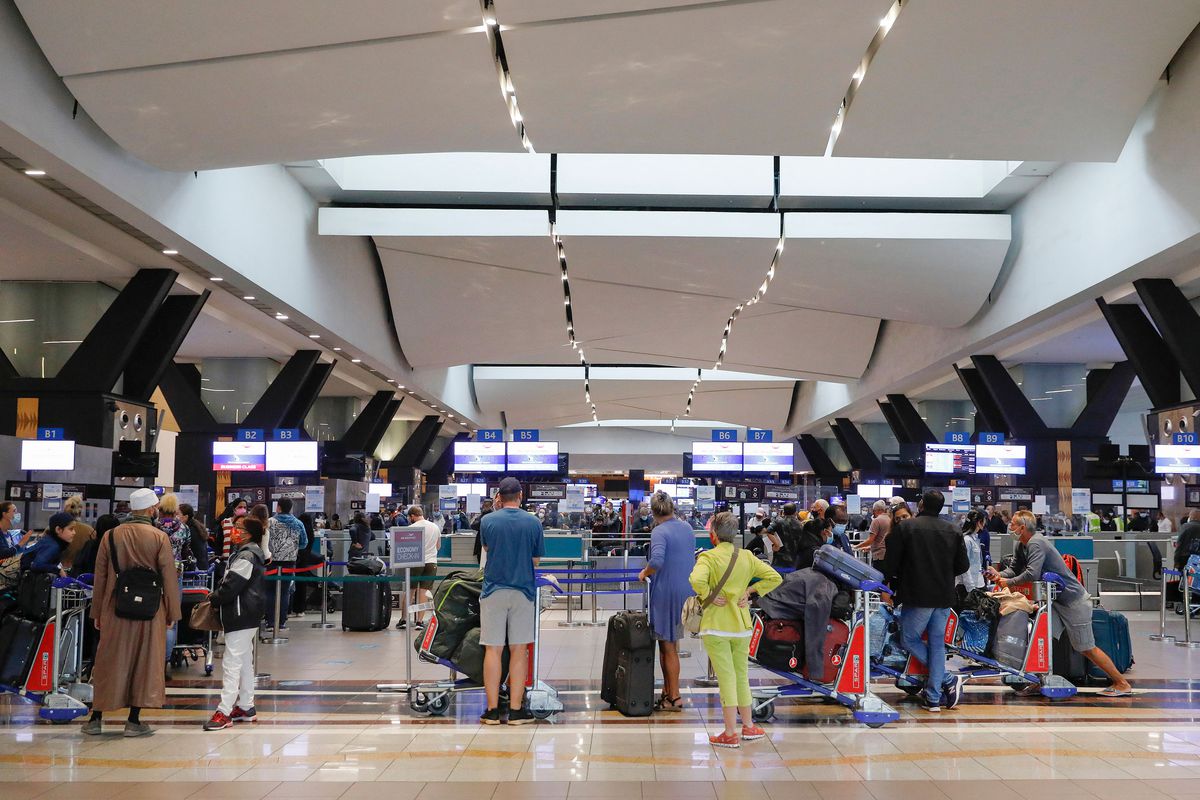 The discovery of the variant has sparked global concern, a wave of travel bans or curbs and a sell-off on financial markets on Friday as investors worried that Omicron could stall a global recovery from the nearly two-year pandemic.

Israel said it would ban the entry of all foreigners into the country and reintroduce counter-terrorism phone-tracking technology to contain the spread of the variant.

Johnson laid out measures that included stricter testing rules for people arriving in the country but that stopped short of curbs on social activity other than requiring mask wearing in some settings.

“We will require anyone who enters the UK to take a PCR test by the end of the second day after their arrival and to self-isolate until they have a negative result,” Johnson told a news conference.

People who had come into contact with people testing positive for a suspected case of Omicron would have to self-isolate for 10 days and the government would tighten the rules on wearing face coverings, Johnson said, adding the steps would be reviewed in three weeks.

The health ministry in the German state of Bavaria also announced two confirmed cases of the variant. The two people entered Germany at Munich airport on Nov. 24, before Germany designated South Africa as a virus-variant area, and were now isolating, said the ministry, indicating without stating explicitly that the people had travelled from South Africa.

In Italy, the National Health Institute said a case of the new variant had been detected in Milan in a person coming from Mozambique.

Czech health authorities also said they were examining a suspected case of the variant in a person who spent time in Namibia.

Omicron, dubbed a “variant of concern” by the World Health Organization, is potentially more contagious than previous variants of the disease, although experts do not know yet if it will cause more or less severe COVID-19 compared to other strains.

England’s Chief Medical Officer, Chris Witty, said at the same news conference as Johnson that there was still much uncertainty around Omicron, but “there is a reasonable chance that at least there will be some degree of vaccine escape with this variant”.

The variant was first discovered in South Africa and had also since been detected in Belgium, Botswana, Israel and Hong Kong.

Dutch authorities said 61 of around 600 people who arrived in Amsterdam on two flights from South Africa on Friday had tested positive for the coronavirus. Health authorities were carrying out further tests to see if those cases involved the new variant.

One passenger who arrived from South Africa on Friday, Dutch photographer Paula Zimmerman, said she tested negative but was anxious for the days to come.

“I’ve been told that they expect that a lot more people will test positive after five days. It’s a little scary the idea that you’ve been in a plane with a lot of people who tested positive,” she said.

Financial markets plunged on Friday, especially stocks of airlines and others in the travel sector. Oil prices tumbled by about $10 a barrel.

It could take weeks for scientists to understand fully the variant’s mutations and whether existing vaccines and treatments are effective against it.

Although epidemiologists say travel curbs may be too late to stop Omicron from circulating globally, many countries around the world – including the United States, Brazil, Canada and European Union nations – announced travel bans or restrictions on southern Africa on Friday.

U.S. Vice President Kamala Harris told reporters on Saturday that the administration will take it “one step at a time,” when asked about additional travel restrictions. “For now we’ve done what we think is necessary,” Harris said.

Also on Saturday, Australia said it would ban non-citizens who have been in nine southern African countries from entering and will require supervised 14-day quarantines for Australian citizens returning from there.

South Africa is worried that the curbs will hurt tourism and other sectors of its economy, the foreign ministry said on Saturday, adding the government is engaging with countries that have imposed travel bans to persuade them to reconsider.

Omicron has emerged as many countries in Europe are already battling a surge in COVID-19 infections, and some have re-introduced restrictions on social activity to try to stop the spread. Austria and Slovakia have entered lockdowns.

The new variant has also thrown a spotlight on disparities in how far the world’s population is vaccinated. Even as many developed countries are giving third-dose boosters, less than 7% of people in low-income countries have received their first COVID-19 shot, according to medical and human rights groups.

Seth Berkley, CEO of the GAVI Vaccine Alliance that with the WHO co-leads the COVAX initiative to push for equitable distribution of vaccines, said this was essential to ward off the emergence of more coronavirus variants.

“While we still need to know more about Omicron, we do know that as long as large portions of the world’s population are unvaccinated, variants will continue to appear, and the pandemic will continue to be prolonged,” he said in a statement to Reuters.

“We will only prevent variants from emerging if we are able to protect all of the world’s population, not just the wealthy parts.”