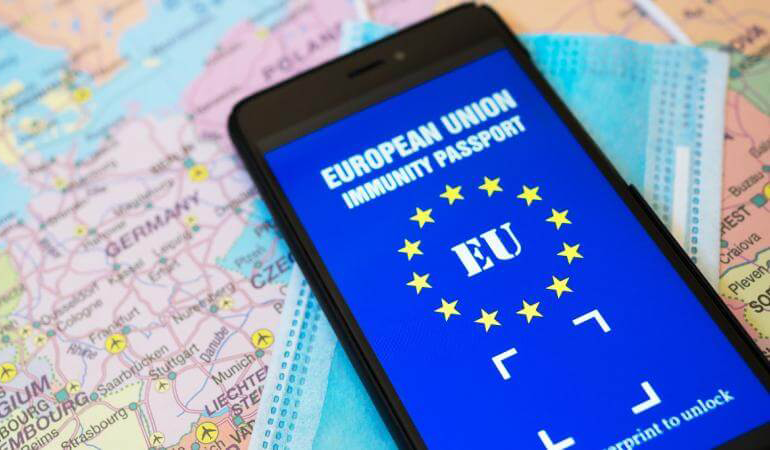 Members of the European Union parliament want the block to impose uniform travel measures for the summer, among others, by creating a common vaccination certificate that would serve specifically for travel.

In a meeting of February 25, the EU Parliament’s Transport and Tourism Committee voted on a draft resolution for the establishment of an EU strategy for sustainable tourism.

The draft resolution, which was adopted with 47 votes in favour and only two against, urges the EU Member States to include the tourism and travel sectors in their recovery plans while recommending the temporary reduction of VAT on businesses in these sectors

Commenting on the resolution, the EP rapporteur Cláudia Monteiro de Aguiar, said that the Committee wants the EU to avoid any past errors ahead of summer by imposing uniform travel measures, such as an EU protocol for tests before departure, a vaccination certificate, and a European sanitary seal

“Tourism is one of the sectors that has been hit the hardest by this pandemic. It needs to be properly included in the Member States’ recovery plans and a mechanism to clearly show whether it benefits from EU support,” rapporteur de Aguiar said.

The draft resolution foresees an EU Health Safety protocol for testing before departure, and among others, notes that quarantine requirement should be applied only as a last resort.

It insists that a common EU vaccination certificate could be used as an alternative to PCR tests and quarantine requirements, “once there is sufficient evidence that vaccinated persons do not transmit the virus.”

The MEPs also want the EU Commission to introduce an EU hygiene certification seal in order to certify minimum COVID-19 virus prevention and control standards and could help to restore consumer’s trust in tourism and travel sectors.

“MEPs also welcome ‘Re-open EU’ portal and urges EU countries to send clear information on the application or lifting of future restrictions on free movement to the Commission,” notes a press release of the Committee on the voting of the draft resolution.

For the resolution to be established, now the full house of the Parliament needs to vote for it by March II session.

The so-called ‘vaccination passports’ or ‘vaccination certificates’ have gained lots of attention in the last months, after several of the Member States warned they would establish such documents and grant them to their citizens fully vaccinated against COVID-19.

The idea of such documents had first been brought forward to the EU by the Greek Prime Minister Kyriakos Mitsotakis, who, through a letter, called on the EU institutions to work on the reintroduction of a Coronavirus vaccination certificate in order to facilitate travel between the bloc.

Since then, the idea has gained the support of many, including the President of the EU Commission, Ursula von der Leyen. Many other countries have already established such documents or are working on it, with  Denmark, Czechia, Greece, Hungary,  Cyprus,  Estonia, Portugal,  Italy, Iceland,  Slovakia, Poland, Spain and Sweden among them.

Back on April 14, in an article named “COVID-19 Test Results and Later on Vaccination Might Be Required for Schengen Visa Application,” SchengenVisaInfo.com had warned that vaccination documents would become the norm for travellers within the EU once a vaccine was approved and available.

nextRemote work could turn out to be great for business travel