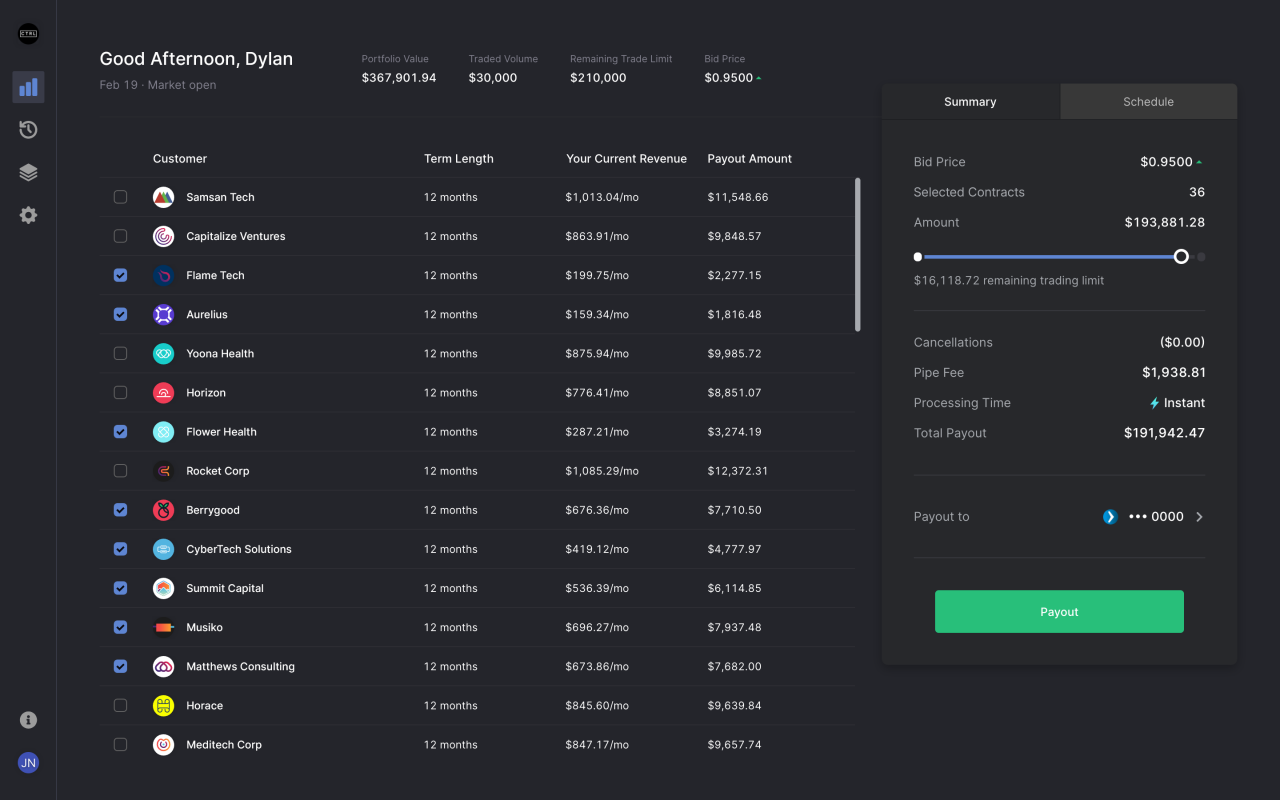 A little over one year ago, Pipe raised a $6 million seed round led by Craft Ventures to help it pursue its mission of giving SaaS companies a funding alternative outside of equity or venture debt.

The buzzy startup’s goal with the money was to give SaaS companies a way to get their revenue upfront by pairing them with investors on a marketplace that pays a discounted rate for the annual value of those contracts. (Pipe describes its buy-side participants as “a vetted group of financial institutions and banks.”)

A few months after that initial seed raise, Pipe brought in another $10 million in funding as an extension of that round.

Pipe co-CEO and co-founder Harry Hurst is loath to label the latest raise with a stage.

“We don’t want to play the alphabet game,” he said. “This wasn’t about the money. We had five or six years of runway going into this round. It was about getting the right partners on our cap table.”

In conjunction with the new financing, Pipe said it is also broadening the scope of its platform beyond strictly SaaS companies to “any company with a recurring revenue stream.” This could include D2C subscription companies, ISP, streaming services or a telecommunications companies. Even VC fund admin and management are being piped on its platform, for example, according to Hurst.

“When we first went to market, we were very focused on SaaS, our first vertical,” he said. “Since then, over 3,000 companies have signed up to use our platform.” Those companies range from early-stage and bootstrapped with $200,000 in revenue to publicly traded companies.

Pipe’s platform assesses a customer’s key metrics by integrating with its accounting, payment processing and banking systems. It then instantly rates the performance of the business and qualifies them for a trading limit. Trading limits currently range from $50,000 for smaller early-stage and bootstrapped companies to over $100 million for late-stage and publicly traded companies, although there is no cap on how large a trading limit can be.

Revenue-based financing: The next step for private equity and early-stage investment

“The best way to summarize it is we can work with any company that has a high degree of predictability around their revenue,” Hurst said. Pipe, he added, aims to turn that monthly recurring revenue into annual recurring revenue.

In the first quarter of 2021, tens of millions of dollars were traded across the Pipe platform. Between its launch in late June 2020 through year’s end, the company also saw “tens of millions” in trades take place via its marketplace. Tradable ARR on the platform is currently in excess of $1 billion.

“We’re helping companies grow on their own terms,” Hurst said. “Or, you could say we’re building the Nasdaq for revenue. Virtually every company in the world has a recurring revenue model already, or if they don’t, they’re thinking about how they can shift to it.” 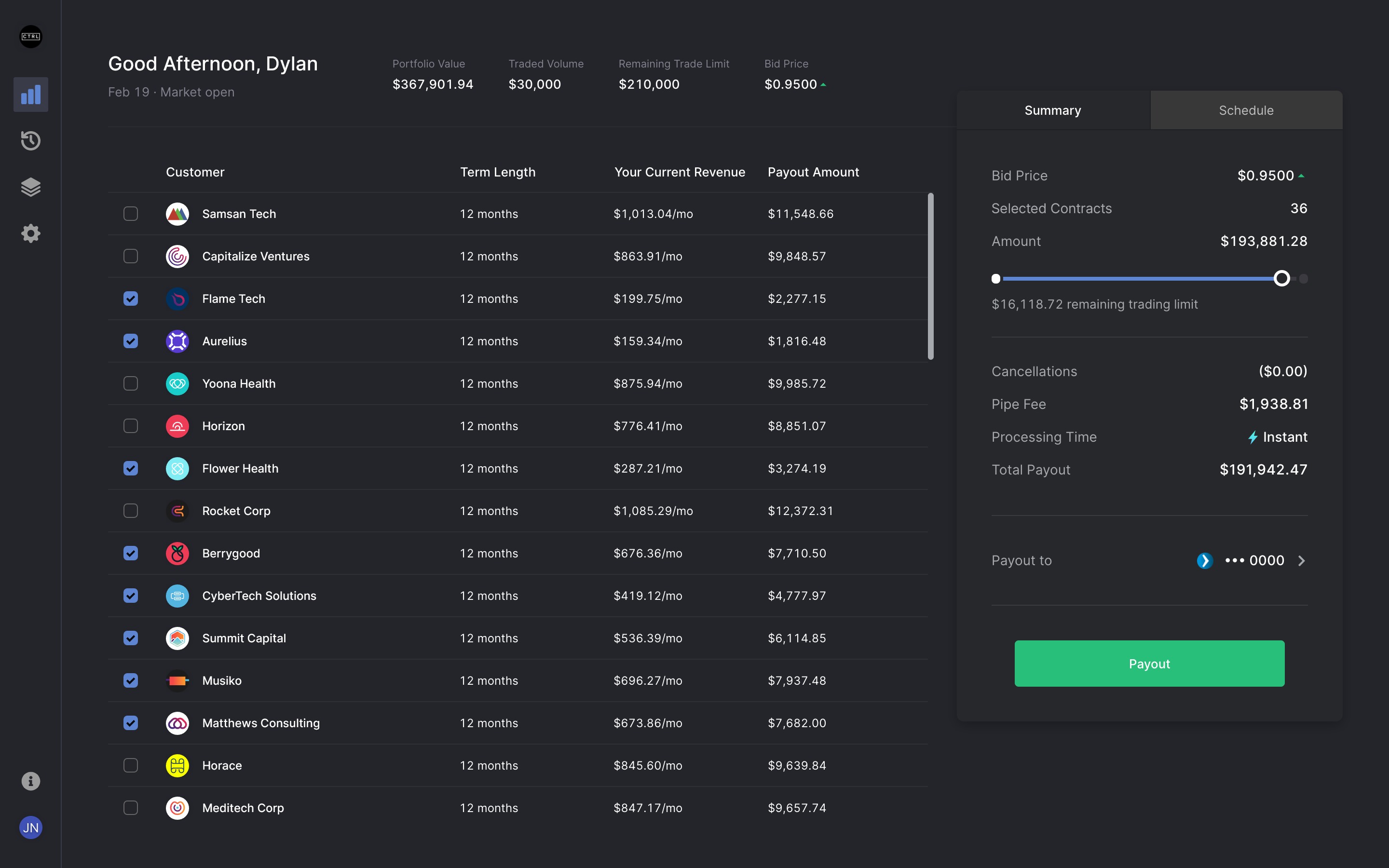 Pipe is also using its new capital and partnerships to take its platform to a global stage.

The startup officially launched in the U.S. but is seeing traction in Europe, Asia-Pacific, Latin America and Canada. Long-term, Hurst expects India to be one of its largest markets.

“When we talk about global expansion, we’re talking about multi-currency support,” Hurst said. “And, teams on the ground in local markets. Technically we’ve served a global audience from day one.”

The goal of the platform is to offer companies with recurring revenue streams access to capital so they don’t dilute their ownership by accepting external capital or forcing them to take out loans.

Pipe, essentially, is a trading platform for a new asset class: recurring revenue.

But Hurst is also quick to say the 25-person company doesn’t view its solution as an alternative to equity in every case.

“We feel like there’s a very important time and place for equity,” he said. “The fundamental problem with equity is that selling it becomes more valuable over time as you grow.”

Pipe, he said, has no cost of capital. Institutional investors compete against each other for deals on its platform. In return, Pipe charges both parties on each side of the transaction a fixed trading fee of up to 1%, depending on the volume.

Its goal with the latest round is to partner with its investors “to provide access to growth capital for the millions of customers they collectively service.”

“They’re building tools on the product side and we’re providing access to capital markets, and especially in the case of early-stage companies that would not otherwise have access to capital, we’re trying to level the playing field,” Hurst said.

Its investors all echo a similar sentiment: that they like how Pipe gives companies an alternative to traditional funding mechanisms.

“We are excited to see how Pipe can help not only Okta Ventures’ portfolio startups approach financing, but also Okta’s large customer base,” he said.