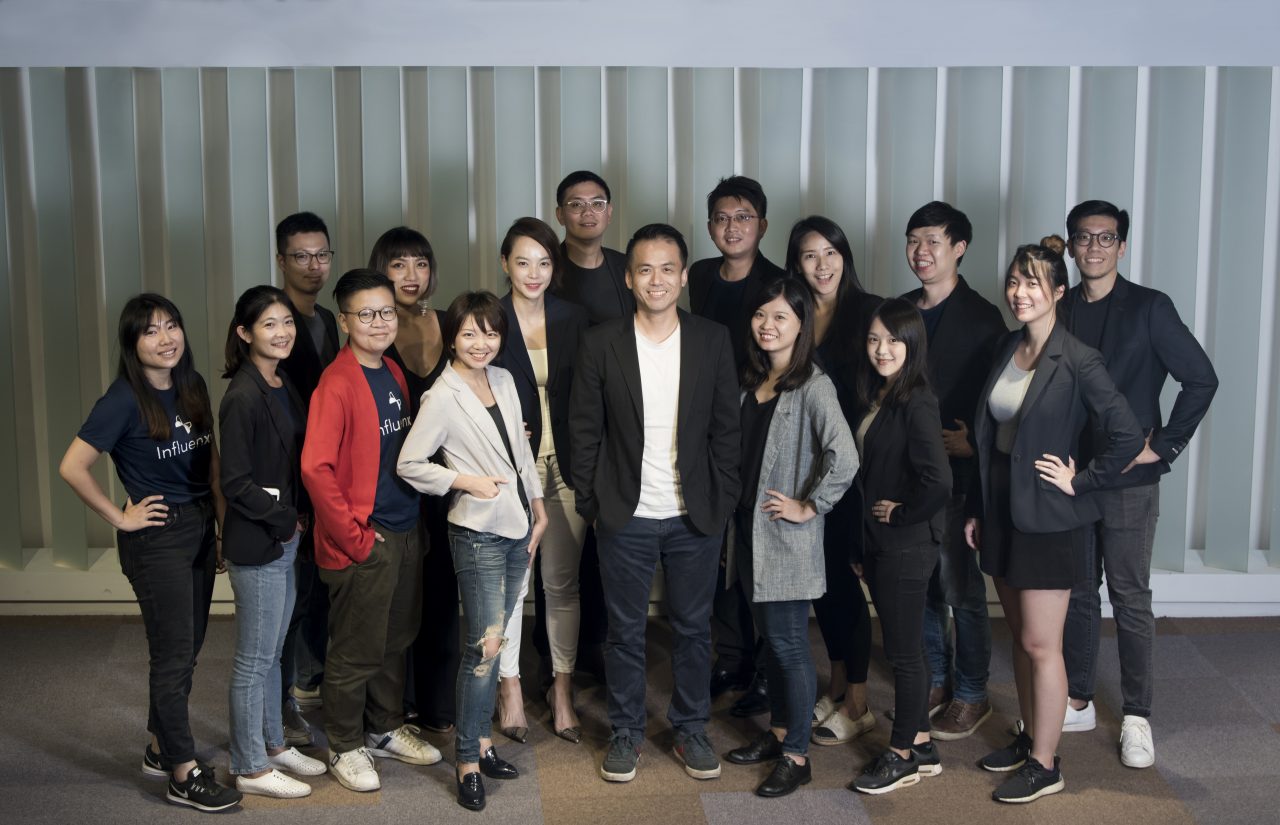 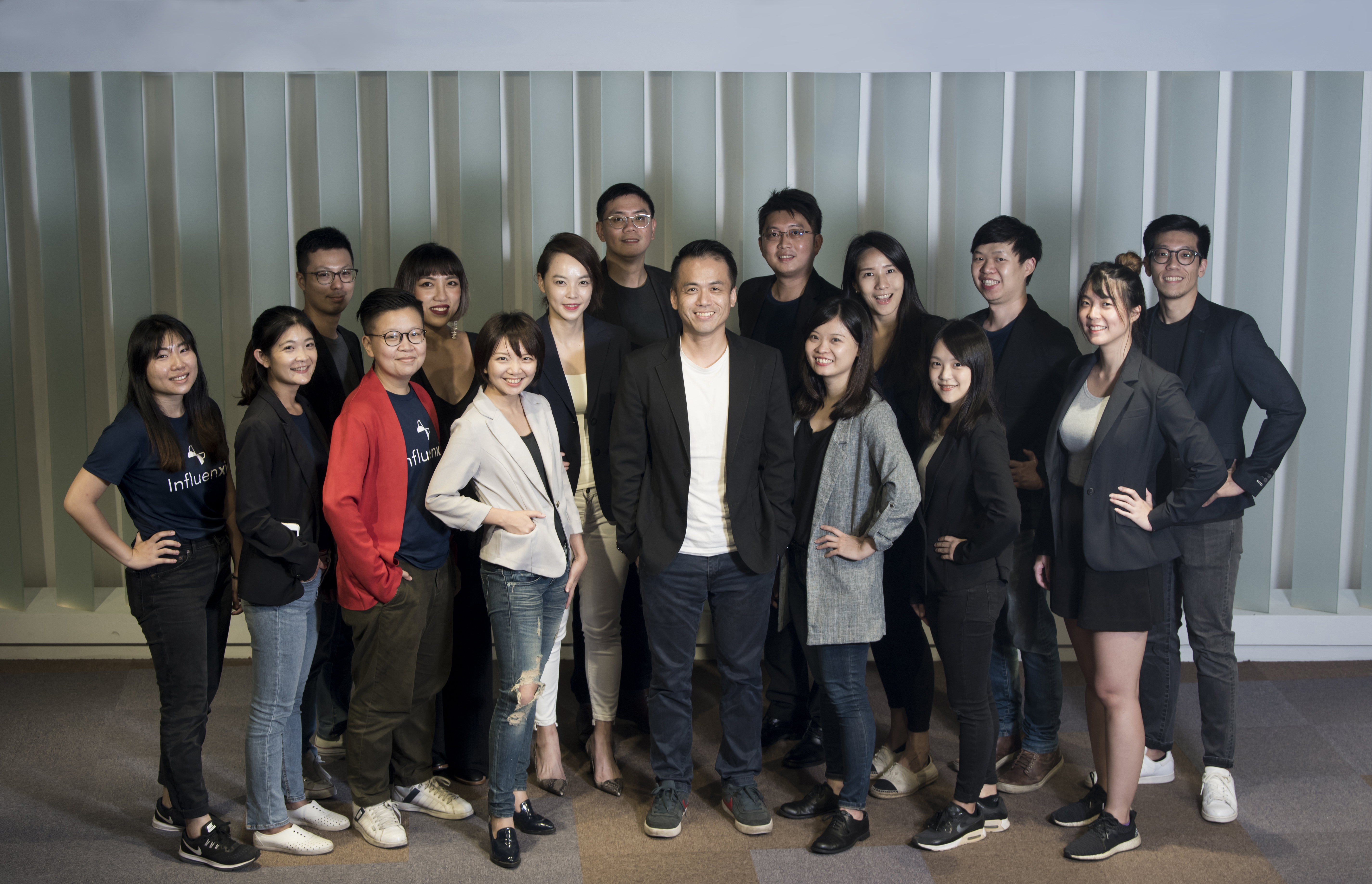 Influenxio’s team, with founder and chief executive officer Allan Ko in the center

“Microinfluencers” are gaining clout among marketers. Though they may have as little as a thousand followers, microinfluencers tend to focus on specific content and be seen as more engaging and trustworthy by their audience, said Allan Ko, founder and chief executive officer of Influenxio. The Taipei-based startup, which connects brands with Instagram microinfluencers through its online platform, announced today that it has closed $2 million in pre-Series A funding led by DCM Ventures, and is launching a new subscription plan.

Founded in 2018, Influenxio has now raised over $3 million in total. It currently operates in Taiwan and Japan, where it has databases of 100,000 and 250,000 Instagram creators, respectively. So far, over 6,000 brands have registered on Influenxio’s platform, and it has been used to run over 1,000 campaigns.

Influenxio plans to use its new funding for hiring and product development. Influenxio’s new subscription plan is a relatively novel model for the field, so one of the startup’s goals is to prove that it works, Ko told TechCrunch. The company also plans to build out its Japanese platform and expand into more countries. 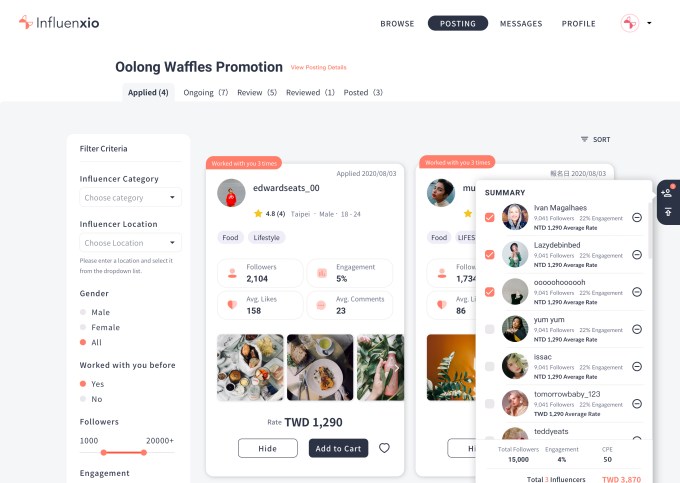 A screenshot of Influenxio’s platform

Influenxio analyzes past campaigns, performance data and client reviews to improve its algorithms. Since the entire campaign creation process–from finding influencers to paying them–is performed through Influenxio, this allows it to gather a wide range of data to refine its technology, Ko told TechCrunch.

Influencers typically make about $35 to $40 USD for each campaign they participate in, and most of the brands the company works with focus on food (like restaurants), fashion, beauty or lifestyle services.

Before launching Influenxio, Ko spent 15 years working in the digital marketing field, serving as an account manager at Yahoo! and Microsoft, and then head of Hong Kong and Taiwan for Google’s online partnerships group. He wanted to create a startup that would combine what he had learned about digital marketing and make accessible to more businesses.

Large brands have used Influenxio to quickly generate marketing campaigns for special occasions like Mother’s Day or Christmas. For example, one advertiser in Taiwan used Influenxio to hire almost 200 influencers in one week, who were asked to test and post about their products, and some of Influenxio’s highest profile clients include Shiseido, Shopee, iHerb and KKBox.

But the majority of Influenxio’s clients (about 80% to 90%) are small- to medium-sized businesses, and Ko said they usually create multiple campaigns to build brand awareness over time, working with a few influencers a month.

Influenxio’s new subscription plan, which costs less than $100 USD a month and is launching first in Taiwan before rolling out to other markets, was created for them. “The first year we launched the platform, we found small businesses want experts and advice,” said Ko. Many don’t have marketing managers, so Influenxio’s subscription plan automatically matches them with new influencers each month and provides them with analytics so they can see how well campaigns are performing.

Influenxio is among a growing number of startups that are tapping into the “microinfluencer economy,” with others including AspireIQ, Upfluence and Grin.

Ko said Influenxio’s biggest difference is its focus on small businesses, and serving as a one-stop marketplace for influencer campaigns. “The important thing for our platform is that it needs to be very easy and simple,” he added. “We spent a lot of time on the execution and details to make it smoother on the advertiser side. For the influencer side, we try to make it more convenient. For example, the way they receive money, our goal is to also make it easy.”