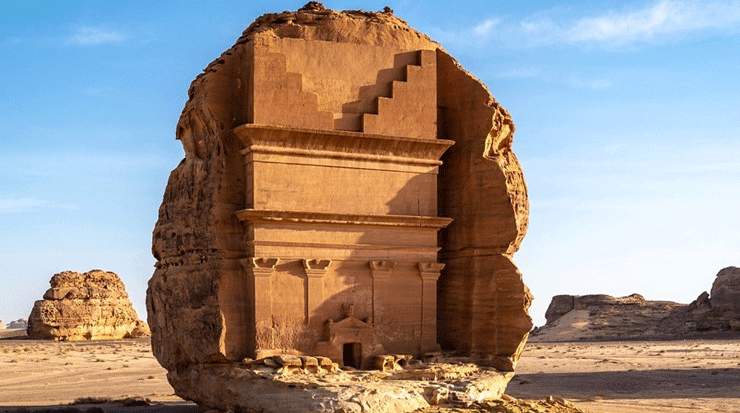 The Royal Commission for AlUla has just announced its new plan for the development of the region. An ambitious strategy, in line with the kingdom’s expectations for what is undeniably one of its major assets in terms of attractiveness of the territory.

Already considered the “crown jewel” of tourism in Saudi Arabia, recently opened to all, even non-religious, the area of AlUla, in the north-west of the country, is home to prestigious archaeological sites dating from the Nabatean era, such as the great tomb of Qasr al Farid or Jebel al Fil, the mountain with elephantine features, that tourists have the opportunity to discover each year on the occasion of the Winter at Tantora festival.

But the commission has just shifted into high gear with a series of strong announcements aimed at making AlUla the largest open-air museum in the world, and a popular destination for art, culture, heritage, and nature lovers from around the world.

This includes the creation of an ambitious infrastructure. The area will be divided into 5 districts, each with its own identity, from the old city of AlUla to the territory of the ancient king Dadan, including Jabal Ikmah, the mountain where many inscriptions tell us how the local populations lived in the area before our era, the Nabatean district, or the historic city of Hegra.

Culture in the spotlight

In addition, fifteen new cultural spots will be created, including museums, art galleries and cultural centers, as well as the Kingdoms Institute, a world center for archaeological research dedicated to the cultures and civilizations that have inhabited this region for over 7,000 years.

A focus on the environment

A low-carbon tram line is underway that will allow visitors and residents alike to travel through AlUla’s various districts, and new hotels, eco-tourism centers and luxury hotels will also be built by 2035 to provide a diverse range of accommodation options, all within 10 million square meters of green space, in an oasis rejuvenated with the commitment to environmental preservation that has driven the Royal Commission for AlUla since its launch.

Let it be noted that upon completion of the wider development strategy for AlUla in 2035, 38,000 new jobs amid a population grown to 130,000 will have been created while AlUla will contribute SAR 120 billion to the Kingdom’s GDP (USD 32 billion).

So, are you ready for a Journey Through Time?