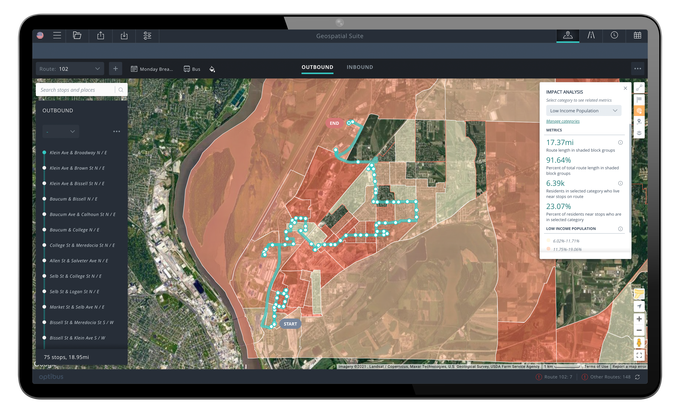 Mass transportation is a critical part of how metropolitan areas keep moving, and today a startup that has built an AI-based platform to help mass transportation work more efficiently is announcing a huge round of funding to grow its business and tackle a new set of opportunities and challenges in the modern city.

Optibus — a Tel Aviv-based startup that provides a platform to analyze how vehicles and people move around in cities and then provides navigation, scheduling, driver rostering and other guidance for mass transportation providers to service those cities better — has picked up $107 million, a Series C that it will be using to continue expanding the kinds of services that it provides to customers.

This Series C is coming at the same time that the startup is launching a new Geospatial Suite that is part of that platform expansion. It provides tools to visualize and predict movement alongside different transportation options, fitting in with the shift that many cities are making to encouraging multi-modal travel covering buses, trains, bikes, scooters and walking to offset traffic congestion from single-passenger cars. 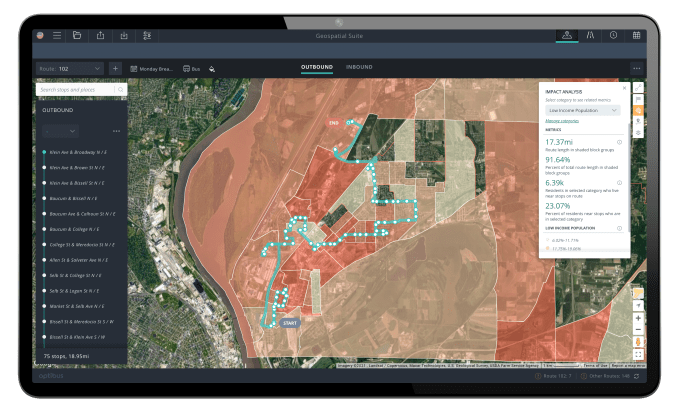 Meanwhile, Optibus’ customers include city governments and other companies and organizations that have implemented mass transportation systems (these include those who have large campuses, but also, for example, big tech companies that operate private shuttle services to bring users who live in one place to their headquarters in another); huge mass transportation providers; electric and other vehicle makers; and more.

The funding is being co-led by two investors, Bessemer Venture Partners and Insight Partners, with previous investors Verizon Ventures*, Pitango, New Era Capital Partners, Dynamic Loop and Blue Red Partners also participating. The company is not disclosing its valuation but Haggiag told me that it’s gone up 4X since its last round in 2018.

Indeed, this is a significant round for Optibus, which prior to this had only raised around $55 million since opening for business in 2014. The size of this Series C underscores the company’s traction and also the potential opportunities of being a transportation data provider at the moment.

Cities exist between a rock and a hard place these days. They have to continue to focus on how to operate well while also getting increasingly crowded — a long-term trend that’s existed for decades. But now, on top of that, dense metro areas also have to figure out how to operate safely at a time when effective social distancing can make the difference between life and death. These two imperatives are often at odds with each other.

While you might assume that social distancing has meant less rather than more use of public transportation, you would be right, but that’s not the full story. Haggiag said that in the last year Optibus has had a surge of new business and increased usage from its customers, not because they are handling more passengers — some cities have seen as much as an 80% drop in passenger revenues, he said — but because buses and other transportation modes have remained running as essential services, but ones that need to be better organised and spaced out than ever before, in order to be run responsibly.

The role of a company like Optibus has been to bring technology into an equation that has been tackled mostly as an offline problem before now.

“People sit in a room to map these routes out. It’s very old school stuff,” said Haggiag. “There so much budget involved and also lots of data that no one uses. No one had previously tried to figure out the patterns.”

Data has become an even more critical part of the transportation equation in recent years. Companies like Uber might have grown their profile through marketing and making their ride-hailing services as ubiquitous as possible, but they have also, very intentionally, positioned themselves as technology companies, building smart platforms to manage and optimize how the pieces move around on the map, so to speak, with the idea being that “winning” in the transportation game is as much about getting that right, as it is about customer service, or introducing new forms of transportation. (Arguably, as Uber has moved away from its moonshot projects, the third of these is even less prominent, making logistics and optimization an even more important part of the tech equation.)

Meanwhile, autonomous vehicle technology plays are about as data-hungry as you can get. AI algorithms need to ingest an endless amount of information to “learn” how to work like humans (or to hope to work like humans, if you are a little cynical like I am). If and when those services ever get up, they too will rely endlessly on streams of data to optimise how and on which streets vehicles should run.

These are, interestingly, not yet two use cases for Optibus, Haggiag said. Interest from autonomous companies has so far been minimal, and it’s only just starting to see its own work in multimodal analytics meeting up with what transportation-on-demand and navigating startups have been working on.

They both, however, point to a couple of big areas where Optibus might grow in the coming years, or who might be interested in the company over time.

In the meanwhile, the startup has a very big opportunity in its current customer base and how attitudes in general around the purpose and longer-term aim of public transportation investments.

While cars have long been the default transportation option in many parts of the world for decades, we have seen a gradual shift even in the most unlikely of cities, like Los Angeles, where services are expanding not because people have suddenly decided they don’t love their cars, but because the growth in population has made the growth of more vehicles untenable. It’s led to a more extensive public transportation network, which has led to more people using it.

“Effective public transportation is a critical part of a well-functioning society, and with the rise of new mobility options and electric vehicles, paired with the added challenge of the pandemic, city operators face more complexity than ever,” said Alex Ferrara, Partner at Bessemer Venture Partners, in a statement. “Optibus stands out as a modern cloud-based solution that cuts through this complexity, allowing transit operators to plan routes and optimize schedules in minutes rather than days, promoting a more affordable and passenger-friendly experience. We are excited to partner with them as they build a global, world-class operating system for public transportation.”

*Disclosure: Verizon Ventures is part of Verizon, which owns TechCrunch. This did not influence my decision to cover this news.