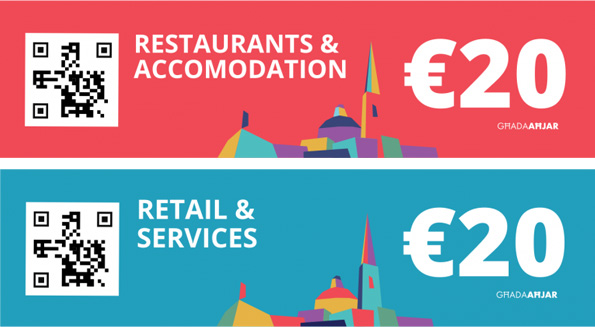 This will be the second round of vouchers and was originally meant to be rolled out some six months ago.

The scheme was delayed when businesses were ordered to close as the number of virus cases rose after the Christmas season.

Prime Minister Dr Robert Abela said on Sunday that in the coming weeks he would be announcing how the voucher system will be working. The distribution of the vouchers is expected to be completed this month.

The first round of €100 vouchers issued to families had generated an additional spend of €11.5 million among consumers.

Government estimates had shown that with every voucher used at retail, people spent an additional €16.42 on the blue vouchers (retail and services) and an extra €7.16 spent with every red voucher (restaurants and accommodation).

The second round of vouchers is expected to allot €60 for accommodation and restaurants and €40 for retail outlets. These will come in €15 and €10 denominations, as opposed to the €20 vouchers distributed during the first round.

‘No vaccine, no travel’

On Sunday Abela again appealed to the public to get their COVD-19 vaccine, saying that without it travel and certain public events would likely be off-limits.

Abela said he understood that some may feel fit and healthy and not see the point in getting vaccinated. However, Europe was heading towards the introduction of a safety certificate that would only be given to those who have been vaccinated. It was highly likely, he said, that overseas travel and certain mass events would be off-limits for those who were not vaccinated.

Abela also said that a dip in the current rate of vaccination would only serve to delay the island’s economic recovery.

“A slow down in the rate of vaccination will be bad news for the country and will have an impact on the re-opening plan for the country’s economy,” he warned.

This, he said, would be a radical game-changer for the sister isle, not just for tourism, but also for business.

Plans for the service have been met with troubled waters. The first two calls for tenders had been cancelled by the Transport Ministry following lengthy legal proceedings, while the third one was cancelled by the the Public Contracts Review Board.

Eventually the government had issued a port notice following a decision by Cabinet to liberalise the shipping market on this specific route.

Abela said the government had sat down and found a solution to ensure Gozo’s priorities were met.

Abela also referred to complaints about over-development in Gozo and insisted that the island’s characteristics need to be respected, not by imposing new limits on development, but by ensuring that development is sustainable and intelligent.