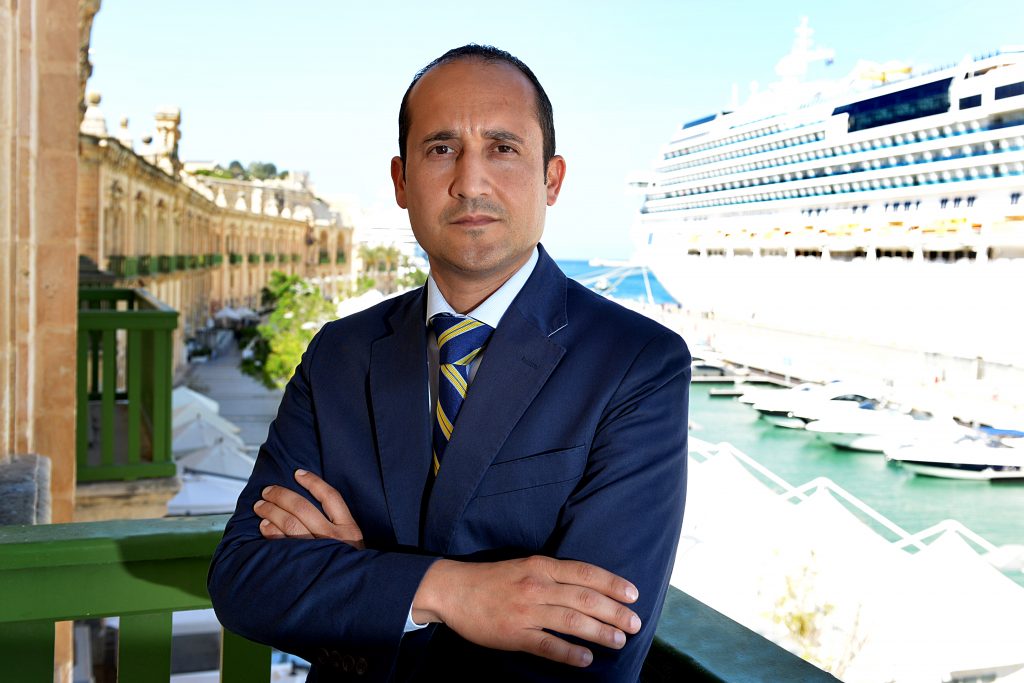 In anticipation of the Mediterranean STARS conference that is being hosted by the Mediterranean Tourism Foundation next week at the InterContinental Malta hotel, the Mediterranean.Observer met up with Mr. Stephen Xuereb, the Chief Operating Officer of Global Ports Holding and Chief Executive Officer of the Valletta Cruise Port plc,  who shall be part of the panel in a Master Class discussing the future of embellishing tourism destinations.

Mr. Xuereb, how does the Valletta port stand out from the other ports found in other countries found in the Mediterranean region?

The port of Valletta is situated in the centre of the Mediterranean, flanked by Sicily to the north, and North Africa to the south. Its central location makes it an ideal port for east and west Mediterranean cruise itineraries, with the port itself being the gateway to Malta’s and in particular to Valletta’s rich historical and cultural experience. Our award-winning port is situated in a scenic natural deep-water harbour, with ease of access to all sized ships year-round. Malta’ diminutive size makes all attractions within close proximity, with diverse experiences on offer and a vibrant Mediterranean lifestyle with both traditional and cosmopolitan features.

Having been part and parcel of the 17-year story of Valletta Cruise Port, I have grown into the role of CEO, after spending my formative years in the industry as CFO, overseeing the development of the €37mn investment. Nearly 3 years ago, I was appointed to the role of Chief Operating Officer of the largest independent cruise port operator worldwide, Global Ports Holding plc, of which Valletta Cruise Port is a subsidiary.  Wearing the GPH hat, I am responsible for the overall performance of both cruise and commercial port operations of all the 17 ports falling under the GPH portfolio, across 4 continents.

It’s certainly not easy juggling the two roles which ask for a hands-on approach, with both entities undergoing a powerful momentum. Valletta Cruise Port is looking at exciting times ahead with plenty of interesting opportunities both from the cruising side and the property management side with its Valletta Waterfront brand. We have experienced 4 record years in the last 5, in terms of passenger volumes. Our entire company philosophy is built around hospitality and customer satisfaction, and our company culture is reflective to this. I’m excited by the commitment that our people have for serving our guests and delivering the best experience possible.  All is only possible with the drive, flexibility and perseverance of the people at Valletta Cruise Port and that of the supporting stakeholders.

What can you tell us about the blue economy in Malta, in relation to the Valletta Port?

In 2018 we hosted about 710,000 passenger movements on 322 calls, a reduction of around 8% compared with 2017, which was a record year when 778,000 passengers arrived in Malta. In 2019, we are expecting some 820,000 passenger movements, which will make 2019 the best year ever for the cruise industry in Malta to date. It is an industry which benefits our local economy, with €102 million in 2017 in the direct expenditure by the cruise industry. This is equivalent to 5.2 percent of total tourism earnings. The  Valletta Cruise Port understands that its activities impact local communities and the environment in various ways and takes its responsibilities seriously. The Valletta Cruise Port, also through the Valletta Waterfront destination, is committed to carrying out its activities responsibly, with the aim of leaving a positive impact through its operations. To this effect, Valletta Cruise Port has signed the UNWTO Private Sector Commitment to the Global Code of Ethics for Tourism. This Code is a frame of reference for responsible and sustainable tourism development as endorsed by the United Nations General Assembly in 2001. By adhering to the Code, Valletta Cruise Port commits to implementing and promoting the Code’s 10 principles in its business strategies and operations, covering the economic, social, cultural and environmental components of its activities.

Did the port experience any kind of impact from having the Valletta 18?

Most definitely. Although the curtain has gone down on Valletta’s year-long spell as European Capital of Culture 2018, Valletta continues to bustle with activity. The past years have proven to be a revival for the city based on a multi-year regeneration programme that places Valletta at centre stage. Investment both within and outside of the city walls led to the development of new infrastructural projects, the restoration of public spaces and buildings, and a multitude of events available day and night, amongst the capital’s iconic hotspots.

V18 indeed served as a backdrop for Valletta Cruise Port to host its first-ever cruise ship christening, Seabourn Ovation, a first of its type for Malta. The ultra-luxury cruise ship and its guests were treated to a line-up of celebratory events to mark this day, with one of the world’s most highly awarded actresses and singers of West End and Broadway fame, Elaine Paige, serving as godmother. A full orchestra ensemble directed by the acclaimed Sir Tim Rice provided additional entertainment during the ceremony. The evening was capped off with an impressive fireworks’ display synchronised to music, coordinated and produced by local fireworks’ factory St. Mary Fireworks of Mqabba, lighting up the historic buildings and fortifications in the Grand Harbour. Additionally Valletta Cruise Port welcomed over 140 delegates for the 52nd MedCruise General Assembly, including cruise line executives, members of the trade press and other key decision-makers in the industry. This event provided an excellent showcase for our Islands and presented attendees with a key opportunity to discuss the latest developments of the sector and the implications and prospects of cruising in the Mediterranean and its adjoining seas.

Lastly, are there any plans in the pipeline for the Valletta Cruise Port? If so, what will they be?

To future-proof its operations, Valletta will invest further in its facilities. Permissions have been obtained to widen the Pinto 4/5 quays by 15 metres, allowing the bigger ships to berth without the need of spacer barges.