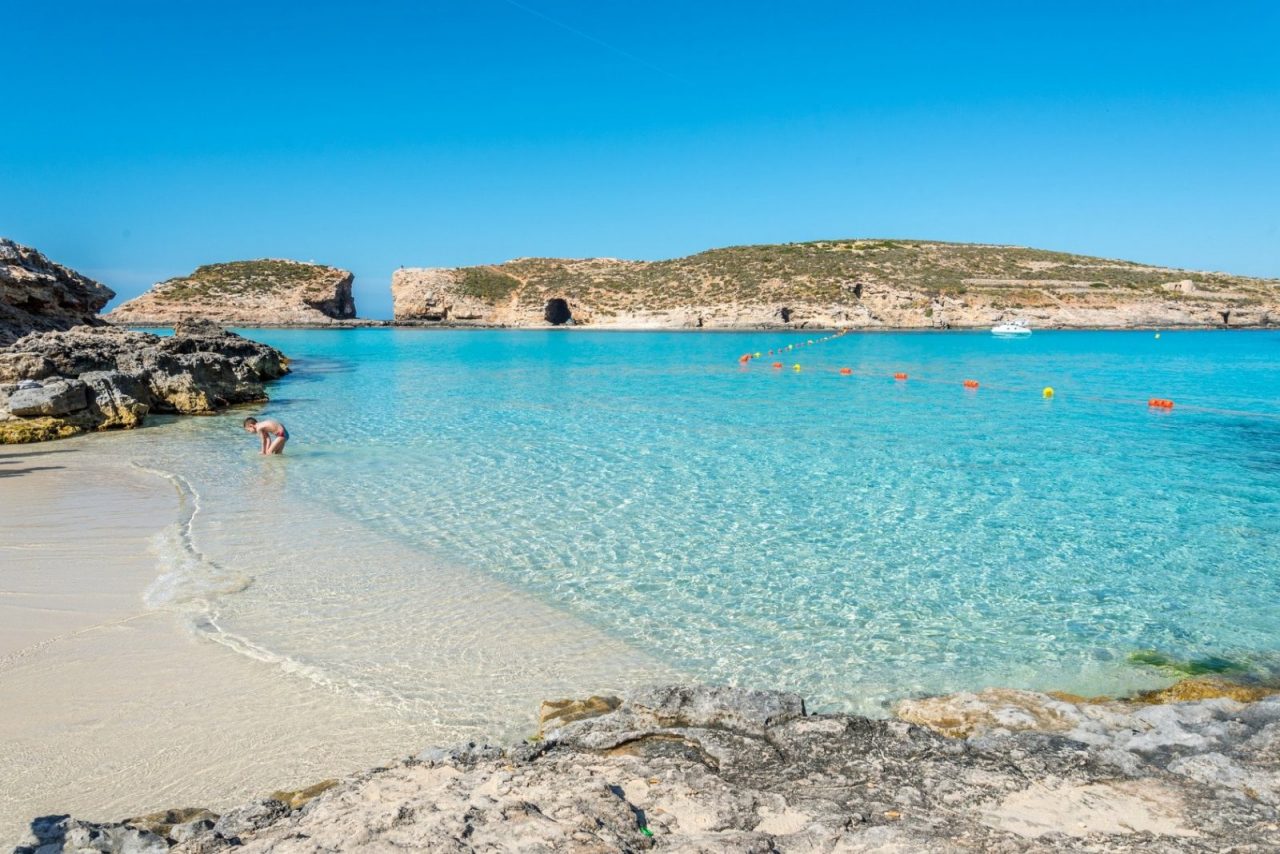 Holiday prices jump as UK Prime Minister Boris Johnson prepares to unveil TODAY the countries allowed to visit from May 17 – but will Israel, Malta and Gibraltar be the only hot spots on the ‘Green list’?

The cost of travel to potential ‘Green list’ destinations soared last night as Downing Street prepared to unveil a list of countries British holidaymakers will be allowed to visit when the international travel ban lifts on May 17.

Flights to popular Portuguese resorts more than doubled in price for May 17 following suggestions the European holiday hotspot may be among a ‘handful’ of destinations to immediately offer quarantine-free travel.

Other places tipped to make the first ‘green list’ are Malta, Iceland, Israel and Gibraltar.

Most of Europe – including France, Spain, Greece and Italy – is expected to be ‘amber’ in a blow to eager travellers, though it is hoped many could turn green by the end of June as the traffic light system is reviewed.

The initial ‘green list’ – understood to contain less than a dozen destinations – will be finalised by Cabinet ministers this morning before being unveiled at a Downing Street briefing led by Transport Secretary Grant Shapps.

But despite insiders warning there will be a ‘very small’ number of countries subject to the loosest rules when the ban on non-essential travel lifts, demand for flights to possible ‘green list’ nations has surged.

British Airways is charging £530 for a flight from Heathrow to the Algarve, Portugal, on May 17, compared to £234 for passengers flying the same route two days earlier. A Ryanair flight from Stansted to Portugal’s capital Lisbon on the day overseas leisure travel restarts is £152, compared with £15 on May 16.

EasyJet is charging £234 for a flight from Luton to the Algarve on May 17, but just £73 the following day.

Airlines increase prices in line with demand, indicating that many holidaymakers are hoping Portugal is categorised as a low-risk destination for coronavirus.

England will adopt its traffic light system when the travel ban lifts on May 17, with destinations placed on green, amber and red lists depending on the perceived threat of Covid infection from abroad.

The ‘green list’ – deemed the most low risk – has been drawn up based on data about the global Covid picture from advisory body The Joint Biosecurity Centre.

But holidaymakers returning from these countries will still be required to take two tests, one within three days of flying back to the UK and another within 48 hours of arrival. This will apply to vaccinated as well as unvaccinated passengers.

Holidaymakers from amber countries will have to take a second post-arrival test on day eight as well as self-isolate at home for ten days.

Arrivals from red countries will have to quarantine in hotels at their own expense for 11 nights.

Assessments will be based on a range of factors, including the proportion of a country’s population that has been vaccinated, rates of infection, emerging new variants, and the country’s access to reliable scientific data and genomic sequencing.

There is speculation the ‘green list’ may feature destinations such as Malta, Gibraltar and Israel, while the Maldives, the Seychelles and several Caribbean islands look set to miss out.

Portugal has been ‘borderline’ for most of the week but Downing Street insiders were last night confident it will be included, the Times reported.

Most of Europe – including including France, Spain, Greece and Italy – is expected to be ‘amber’.

However, it is hoped many popular holiday destinations will be added to the ‘green list’ by the end of June as the traffic light list is reviewed. One source said ‘things are going in the right direction’ for this to happen.

No plans for the resumption of foreign holidays have been announced by the UK’s devolved administrations.

The Prime Minister has been under pressure to accelerate the resumption of foreign travel due to the success of Britain’s vaccination programme, with more than half of the UK’s population now inoculated.

Former ministers yesterday urged Mr Johnson to ensure ‘as many holiday destinations as possible’ are placed on the initial ‘green list.’

David Jones, the former Secretary of State for Wales, said: ‘Aviation and the travel industry are major elements of the country’s economy and should be supported by speeding up the lifting of travel restrictions.

‘The government should also — consistent with safety — ensure that as many holiday destinations as possible are put on the green list. British people are keen travellers and the time has come to restore their freedom.’

Ex-transport minister Theresa Villiers added: ‘The green list needs to be based on a rigorous scrutiny of the evidence to ensure we don’t jeopardise the huge success of the vaccination programme.

‘But as popular holiday destinations see case numbers falling, there should be some headroom to start to safely lift travel restrictions.’

Earlier this week, Mr Johnson warned that putting lots of countries on the travel ‘green list’ from May 17 could risk a jump in cases from abroad.

The Prime Minister has maintained Downing Street will be ‘cautious’, with Health Secretary Matt Hancock and chief medical officer Chris Whitty said to be among those pushing for quarantine-free states to be kept to a minimum.

‘We do want to do some opening up on May 17 but I don’t think that the people of this country want to see an influx of disease from anywhere else,’ Mr Johnson said on Monday.

Mr Johnson’s comments were met with scrutiny by travel experts, who claimed there is ‘no danger of an influx of disease’ into Britain considering the proposed precautions.

Paul Charles, CEO of travel consultancy The PC Agency, told MailOnline: ‘The reason why testing has to be done by every passenger pre-departure to the UK, and after arriving here, is to help weed out any infections or variants. There have been very few cases or variants in recent weeks since these measures were put in place.

‘The Prime Minister needs to focus on protecting hundreds of thousands of jobs at risk in the travel and tourism sector, and open up overseas travel safely, and progressively, from May 17. ‘

Meanwhile, Clive Wratten, CEO of the Business Travel Association, called on destinations used by business travellers not to be overlooked.

He said: ‘The BTA is watching closely for the green and amber traffic light countries. Whilst we all look forward to a holiday, it’s vital for the UK economy that business travel destinations are included on the green list as soon as it is safe to do so.’

Earlier this week a shift in Government travel advice gave an apparent a hint of what destinations could be on the upcoming ‘green list.’

Tourists visiting a number of popular summer hotspots do not face a level of risk for coronavirus that is ‘unacceptably high’, according to the latest updates from the Foreign, Commonwealth and Development Office (FCDO).

The FCDO is not advising against non-essential travel to Portugal (excluding the Azores), Spain’s Canary Islands or the Greek islands of Rhodes, Kos, Zante, Corfu and Crete.

There is no guarantee that the ‘green list’ will match the FCDO’s travel advice, but the latter indicates the Government’s current evaluation of the risks to tourists.

Meanwhile Tui, the UK’s largest holiday company, announced it will offer customers coronavirus tests for a fraction of standard prices.

The cheapest package – aimed at people returning from green destinations – will be available for just £20, and consist of a lateral flow test and PCR test.

PCR tests alone typically cost £120 each, although several travel companies offer them for £60.

Tui said it is ‘subsidising the cost of testing to help customers travel again this summer’.

There are fears that testing requirements will make summer holidays unaffordable for many families by adding hundreds of pounds to the cost of a trip.

Rory Boland, editor of magazine Which? Travel, said the announcement of £20 packages is ‘great news – but only for Tui customers’.

He urged the Government to ‘reduce the cost of testing across the board, rather than have consumers rely on a system that is currently fragmented and flawed’.