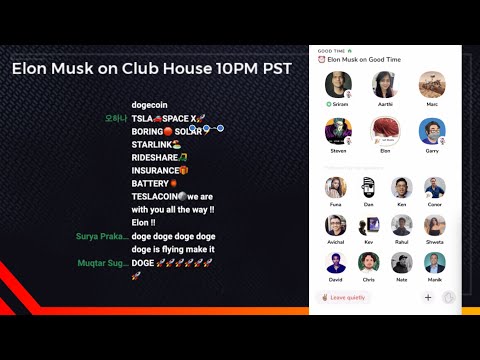 As I write this Elon Musk has joined Clubhouse for his first-ever in-person session and the boundaries of the app have already been tested. Only 5,000 people are in the room, BUT… the session is being live-streamed from here or here.

I am dusting off my creaky live-blogging skillz to cover the session… and will update this post as we go (apologies for appalling typos in the interim).

Musk initially talked about going gong to Mars and said it was likely to be a “hard” for the early pioneers, but that it would be a matter of keeping the “candle of civilization alive in the dark”.

Asked if he believed in aliens, he said there wasn’t a single piece of conclusive evidence for the existence of aliens, although it’s “quite possible” there is such a thing as Alien tech, at least at a “7/11” level, and a joked that they evidence so far suggests they might be at the “500 Megapixel camera” or “at least iPhone 6 level”.

He said his kids were not quite into the idea of going to Mars.

Asked about memes online he quipped: “He who controls the memes controls the universe” and it’s about what influences the zeitgeist. Memes are a complex form of communication – unlike pictures, memes are “10,000 words not 1,000 words”. They are aspirationally funny. “I love memes, they can be very insightful”

I don’t follow them, but some “are sent by “meme dealers” who are friends.

He posted about Neurolink but said Tesla had one of the strongest AI teams in the world.

With AI, it’s about “how to we stay relevant” and at least “stay along for the ride” in the good scenario” and couple to AI.

“People are already a cyborg.” We already have a tertiary layer in the form of smartphones. The bit-rate of us typing into a phone is 100 bits. So it’s like trying to talk to a tree, for our smartphones. So with a direct neural interface, we increase it with a huge magnitude. And also spend longer with a higher magnitude.

You can decide if you want to be a robot of a person. But when you wake in the morning you wouldn’t have to be the same as you were yesterday. It’s analogous to a video game, not unlike the “Altered Carbon” Netflix series.

There are primitive versions s the Neurolink idea, with tiny wires into your brain.

He said they will be releasing new videos in a month or so, such as of a monkey playing videos with their mind.

The value of the early implant will be enormous and outright the risks.

Question: What should we educate a 5-year-old about in this world?

Musk talked about how video games engage children, but explaining “the why” was important. “We are programmed to forget the low “probability of things” if they aren’t relevant.

Such as, taking apart an engine and putting them together. We will need tools, so we understand the relevance. It’s better than having a “course of wrenches”

He was asked “why are there not more Elon Musks”? “If you need encouraging words, don’t do a startup”.

He said it was clear Bitcoin was getting broader acceptance by the finance world. “I don’t have a strong opinion on other currencies.”

Dogecoin is a made aa joke to make fun of cryptocurrencies, but “fate lives irony”.

“The most entertaining outcome is the most likely.” The most ironic outcome would be dogecoin becoming the currency of the future.

He made a joke about bitcoin and his account got locked.

TESLA: They want to make 20 million cars and trucks per year as a target.

Autonomous driving could reach a significant amount of time you would rely on it in a week, so autonomous cars would do a third of the hours in a weeks, so 60 hours instead of 12.

Making sense of objects with technologies like Lidar would effectively make cars “superhuman”.

Working remotely on zoom has been tricky for him, but remote working has not been perfect. “Fear is not the mind-killer, context switching the mind-killer” he said.

Would he start another company? It joked that he pretty much has his hands with Tesla, Space X, The Boring Company and others to date.

He talked about the huge advances in vaccine technology, such as the MRNA tech which made the Covid-19 vaccine possible. He seems very bullish about the vaccine.

“There is going to be an avalanche of vaccine” coming, “I guarantee you ‘it’ will be thrown away this year.” He said ‘CureVac’ vaccine will be approved soon.

He mentioned, “The Tesla machine can make a bazillion doses super fast.”

He made his poison clear on vaccines: “I am not an anti-vaxxer I am a pro-vaxxer.”

Joining Silicon Valley in the early days he had to ask himself ‘I watch the internet being built in front of me or do I get involved.’

Too shy to speak to anyone in the lobby of Netscape.

Then he tried to code. He wrote the first maps and directions on the internet. The Web site only worked during the night as he was using the server during the day.

Marc Andressen quipped that we would get a job the next time he hangs out in the lobby.

He’s been watching The Last King for is historical accuracy and Cobra Kai. The Expanse’s plot lines sometimes seem too fantastical to him.

He was recommended Devs and Mythic Quest and Ravens Baquet.

Tenet was “pretty good”. Did he understand it “If you think too hard about it, it’s not going to make complete sense, but it’s a good movie”

His knowledge of the Hitch Hikers guide to the Galaxy, remains intact

“Vlad The Stock Impaler” was brought into the Clubhouse room to talk about the Game Stop phenomenon. It turned out this was the actual CEO fo CEO of Robinhood.

“Vlad” made a rambling attempt to explain what happened last week but was interrogated by Musk (things getting slightly surreal at this point).