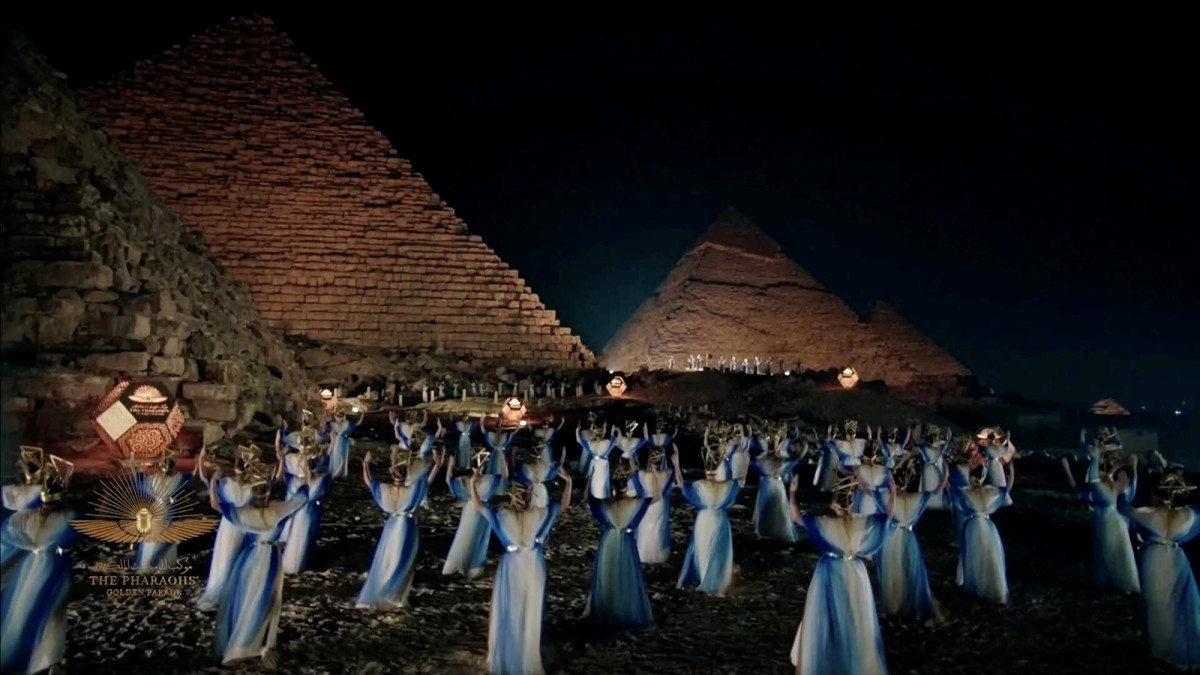 No sound is louder than the sound of the Royal Mummies parade procession, says Tourism Minister Khaled El-Anani

The eyes of the whole world turned to Egypt, on Saturday evening, as one of the most important archaeological events of the 21st Century took place.

The royal mummies, which belong to Ancient Egypt’s 17th, 18th, 19th, and 20th Dynasties, were placed in specially constructed vehicles as part of a magnificent parade, and include the mummies of 18 pharaohs and four queens.

The event started with the arrival of President Abdel Fattah Al-Sisi, accompanied by Minister of Tourism and Antiquities Khaled El-Anani, to inaugurate the National Museum of Egyptian Civilization.

The Minister then guided Al-Sisi through a tour of the museum, after which a promotional film of tourism in Egypt, featuring the renowned Egyptian actor Khaled El Nabawi, was aired.

The film showed only a small part of the state’s achievements in the field of antiquities and museums during the past few years, during which Egypt was able to establish and develop more than 20 museums.

There have been several significant efforts to restore and develop more than 100 buildings and archaeological sites from different eras across Egypt, with work progressing significantly at the GEM, which is nearing completion.

The Minister said that Saturday’s event is an exceptional and unique event that best promotes Egypt’s tourism. He also noted that the coming period will witness the introduction and opening of many archaeological artefacts and discoveries.

El-Anani announced that Egypt has completed 100% of the work on the Museum of the Capitals of Egypt, which is located in the New Administrative Capital.

He also said that Egypt is currently preparing for the opening ceremony for the Grand Egyptian Museum (GEM), which is set to be another significant event attended by world leaders.

“Today no voice is higher than the voice of the royal mummies parade,” El-Anani said to conclude his speech.

The minister’s introduction was then followed by a documentary film, in which a number of Egyptian actors each appeared from different tourist destinations across the country.

Soon after the Minister’s speech and the film concluded, the doors of the Egyptian Museum in Tahrir Square were opened to allow the 22 mummies to leave for the last time.

The mummies were transferred in cars specially constructed for the procession, bearing a logo and the name of the royal mummy on the car in Arabic, English, as well as hieroglyphs. Horse-drawn war chariots, also specially made for the occasion, took their place on both sides of the road during the parade.

The cars proceeded in a circular shape around Tahrir Square itself, moving around the obelisk that now lies at the centre of the square.

At the same time, the obelisk and the buildings around it were lit up for the occasion, with the procession proceeding to move along the banks of the River Nile.

The procession path included eight notable points, the most important of which were Tahrir Square and the Ain Sira Lake.

The procession featured military music, with an impressive artistic performance displayed in celebration of the royal exit from the museum. A number of actors participated in the ceremony talking from different tourism destinations, including Yousra, Hussein Fahmy,Ahmed Helmy and Mona Zaki, among others.

The mummies were received by President Al-Sisi at the National Museum of Egyptian Civilization, where they were greeted by a 21-shot salute.

The highly-anticipated event was attended by a number of world leaders and other notables, including UNWTO Secretary-General Zurab Pololikashvili, and UNESCO Director-General Audrey Azoulay.