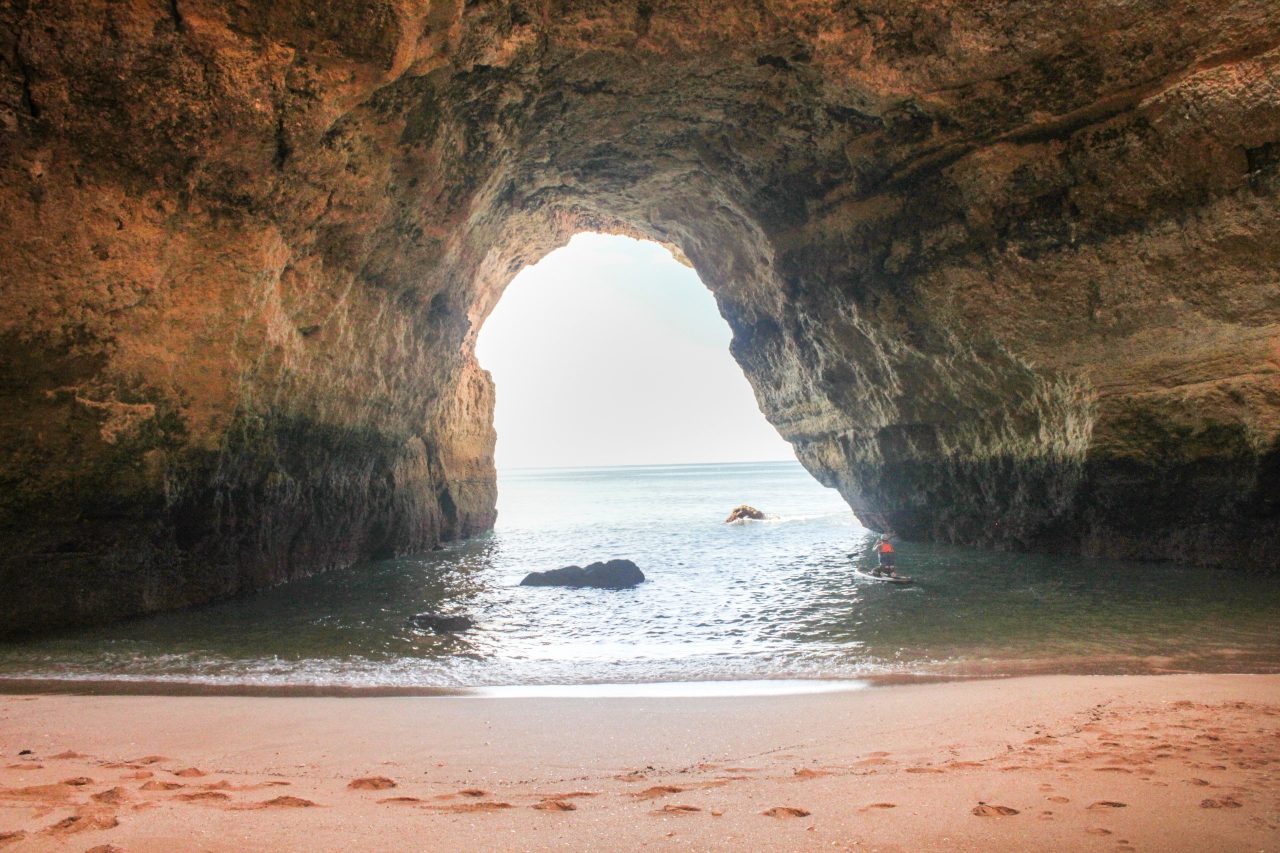 The instructions are clear enough: “Please try not to run into the other kayaks or the rocks,” says Fabio Dias. “To turn left, you have to paddle right, and vice versa,” the tour guide says.

Portugal’s Algarve is known for its rugged cliffs and colorful rock formations, but between Albufeira and Portimao is a special gem: the Benagil Caves, which can be best explored by taking a kayak or canoe.

Crossing the water to the cave

It doesn’t take long for Dias’ group to get used to their seacraft, and with just a few paddle strokes, they reach the entrance to the Algar de Benagil, also called the cathedral. From the outside, the rock formations look like the large arches of a medieval church.

Inside the cave, it’s pleasantly cool and surprisingly bright. Light enters not only through the sea access, but also through a huge hole in the ceiling 20 meters (65.6 feet) above the visitors that’s called the “eye.”

“The history of the cave’s formation goes back about 20 million years,” explains Dias. Over the millennia, the sea level sank while the cliffs moved upwards. Wind, rain, heat and drought also contributed to the erosion of the layers of clay and calcareous sandstone inside the cave, and at some point, the ceiling collapsed.

A view above and below

Some of the people on the kayak tour say they were able to look into the cave through the “eye” the day before, though it wasn’t possible to get too close due to safety reasons.

Above the cliffs, however, there is a hiking trail that leads to the next village, Carvoeiro. “I can’t even say whether the coast looks more beautiful from above or from down here. But it’s definitely great to have this change of perspective,” says Rick, a kayaker.

The group admires how the light and shadow plays in the cave, finds fossils in the rock and keeps an eye out for rock doves, hawks and seagulls. The birds are said to live, nest and breed in the cave.

The trouble with motorboats

The kayaking group is lucky, says Dias. It’s rare to see the cave so deserted. In high season, up to 300 tourists used to come a day – many of them on motorboats – at least before the pandemic, he says.

Each boat makes the trip up to eight times a day in July and August. “The noise stresses the birds, and overall the motorboats are bad for the environment,” says Dias. During lockdown, they disappeared.

At the end of the tour, the group heads for Praia da Marinha. The guardian of this award-winning beach is an elephant that towers on the western side of the bay and dips its huge rocky trunk into the water. And there is “King Kong,” a rock that resembles a monkey.

After two and a half hours, it’s back to Benagil beach. The group asks Dias if he doesn’t get bored of always doing the same tour.

“Not at all,” he says. “I used to work as a web developer in an office, which was boring. Today I’m lucky enough to row out to sea twice a day. Sometimes I even do a third tour just for myself after work.”