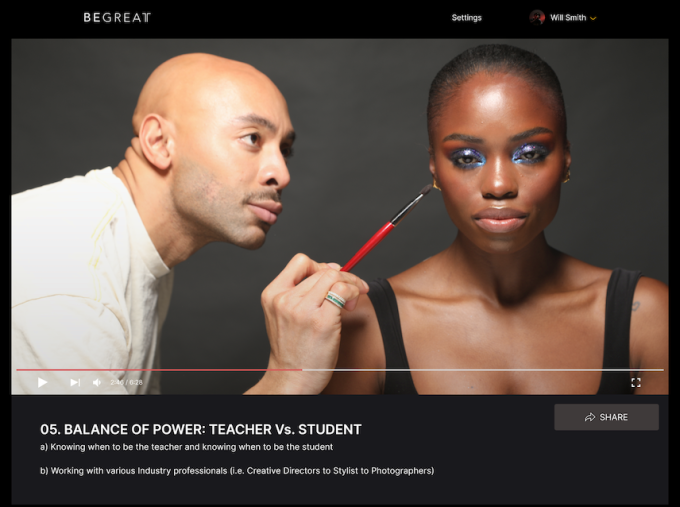 The goal with BeGreatTV is to enable anyone to learn from talented Black and brown innovators and leaders, founder and CEO Cortney Woodruff told TechCrunch.

“When you think of being a Black or brown person or individual who wants to learn from a Black or brown person, there’s nothing that really exists that gives you a glossary of every business vertical and where you see representation at every level in a well put together way,” Woodruff said. “That alone makes our market a lot larger because there are just so many verticals where no one has really invested in or shown before.”

The courses are designed to teach folks how to execute and succeed in a particular industry, enable people to better understand the business aspect of industries while also teaching “you how to deal with the socioeconomic and racial injustices that come with being the only one in the room. Whether you are a Black man or woman who wants to get into the makeup industry, there will always be a lot of biases in the world.”

When BeGreatTV launches in a couple of months (the plan is to launch in April), the platform will feature at least 10 courses — each with around 15 episodes — focused on arts, entertainment, beauty and more. At launch, courses will be available from Sir John, a celebrity makeup artist for L’Oreal and Beyoncé’s personal makeup artist, BeGreatTV co-founder Cortez Bryant, who was also Lil Wayne and Drake’s manager, as well as Law Roach, Zendaya’s stylist.

Hamilton and Haddish will also teach their own respective courses on business and entertainment, Woodruff said. So far, BeGreatTV has produced more than 40 episodes that range anywhere from three to 15 minutes each. 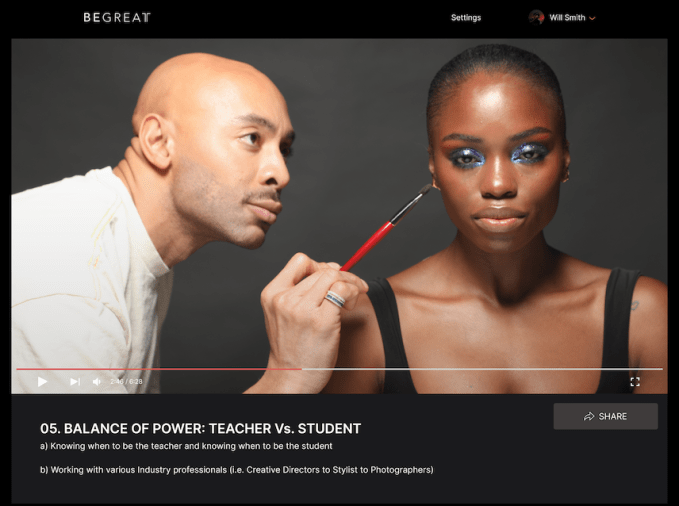 Each course will cost $64.99, and the plan is to eventually offer an all-access subscription model once BeGreatTV beefs up its offerings a bit more. For instructors, BeGreatTV shares royalties with them.

“Ultimately, the platform can include a more diverse casting of instructors that aren’t just Black and brown,” Woodruff said. But for now, he said, the idea is to “reverse the course of ‘Now this is our first Black instructor’ but ‘now this is the first white instructor’” on the platform.

BeGreatTV’s team consists of just 15 people, but includes heavy hitters like Cortez and actor Jesse Williams. Currently, BeGreatTV is working on closing its seed round and anticipates a six-figure user base by the end the year.

MasterClass is perhaps BeGreatTV’s biggest competitor. With classes taught by the likes of Gordon Ramsay, Shonda Rhimes and David Sedaris, it’s no wonder why MasterClass has become worth more than $800 million. The company’s $180 annual subscription fee accounts for all of its revenue.

“If you benchmark [BeGreatTV] to MasterClass, we are finding individuals that are not only the best at what they do in the world, but often times these individuals have broken barriers because often times they were the first to do it,” Woodruff said. “And do it without having people who look like them.”