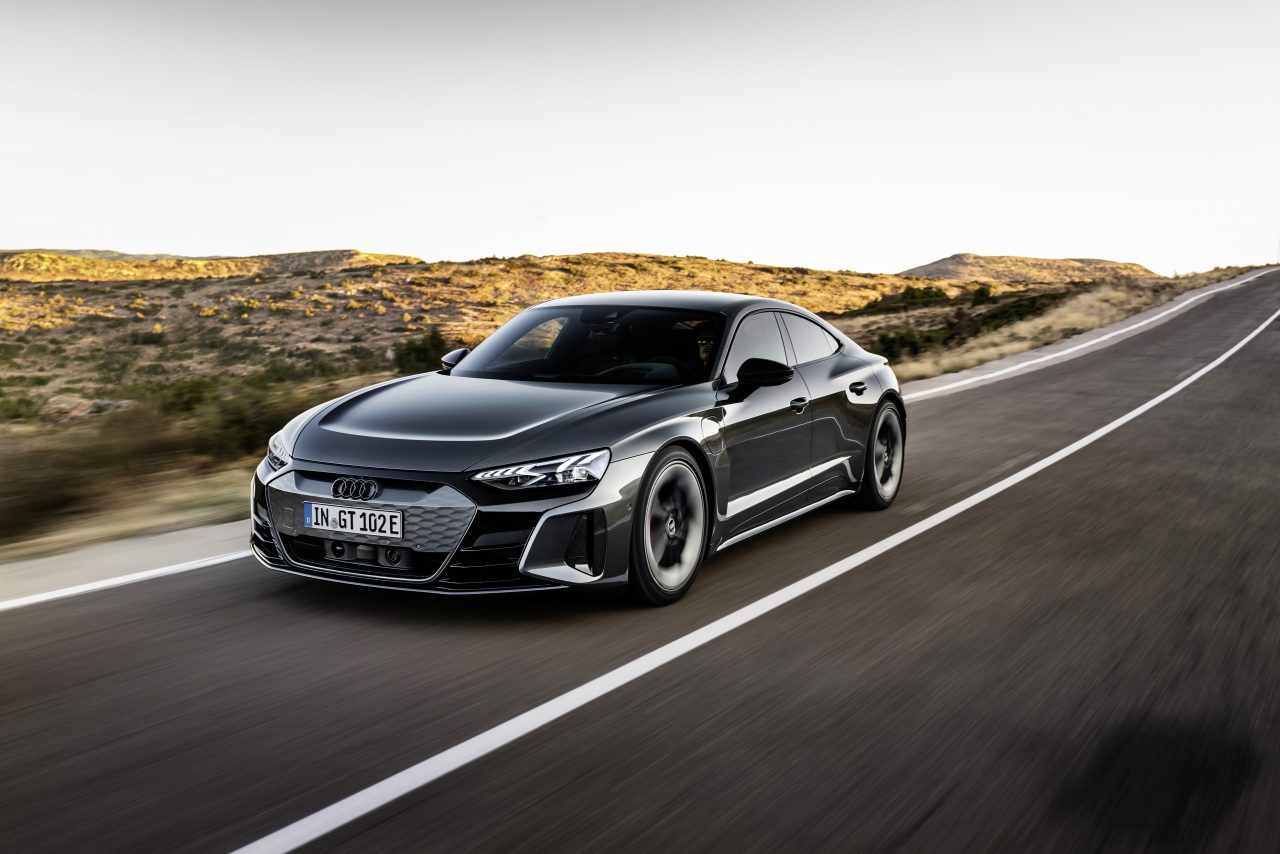 Audi revealed Tuesday the 2022 e-tron Quattro GT and its higher-performing sibling the RS e-tron GT — flagships of the German automaker’s growing electric vehicle portfolio and its first departure from the crossovers and SUVs that have so far dominated the lineup.

The Audi e-tron GT and RS are the third and fourth all-electric vehicles in the company’s U.S. portfolio, followed by the e-tron SUV and e-tron Sportback that debuted in 2019. The Audi Q4 e-tron — another SUV — will be the automaker’s fifth electric vehicle. All of these e-tron models are part of Audi’s plan to launch more than 30 electric vehicles and plug-in hybrids by 2025.

“This car is a new, very progressive interpretation of the classical GT,” Marc Lichte, head of Audi design, said in Tuesday’s presentation. “That means proportions like a super sports car, and the usability of a real four seater. And that’s something completely new.”

The e-tron GT, which goes into production this spring and will hit the U.S. market this summer, packs in the performance and luxury in its sporty package. The base e-tron GT has two motors that produce the equivalent of 469 horsepower — or 522 hp with “overboost” — and can travel an estimated 238 miles on the 93.4-kilowatt battery. Under the European WLTP standard, the e-tron GT range is 298 miles.

The RS e-tron has the same front motor as the entry-level GT, but has a more powerful rear motor. Together, the motors can produce 590 horsepower and up to 637 horsepower with overboost. As a result, the RS e-tron GT can accelerate from zero to 60 miles per hour in 3.1 seconds and has a 155 mph top track speed, the company said. The RS has an estimated EPA range of 232 miles.

The company has yet to receive an official EPA estimate for either variant.

The vehicles also have an 800-volt electrical architecture — the same that is in the Porsche Taycan. That architecture allows the e-tron GT, like the Taycan, to replenish its battery from 5% to 80% in 22.5 minutes, one of the quickest charging rates in the industry.

The e-tron GT shares more than just the 800-volt electrical architecture with Porsche. Audi and Porsche, which are both VW Group companies, co-developed the e-tron GT and the Taycan. The two vehicles also have the same chassis and vehicle foundation.

Inside, the e-tron GT comes standard with a 12.3-inch Audi virtual cockpit digital instrument cluster and a central 10.1-inch touchscreen, where drivers can control music, navigation and other controls as well as electric vehicle-specific features such as searching for charging stations. Owners can opt for an upgrade and add a head-up display as well.

The vehicle also comes standard in a leather-free interior featuring recycled materials including an artificial suede called Dinamica, although a Nappa leather option is also available as an upgrade.

All of this performance and luxury comes at a price. The base model of the e-tron GT quattro starts at $99,900, followed by a higher trim level priced at $107,100. The RS e-tron GT starts at $139,900. Those prices push even higher for those that opt for the additional features, notably the company’s Matrix LED headlights, which are only available in Europe.

nextSentropy launches tool for people to protect themselves from social media abuse, starting with Twitter