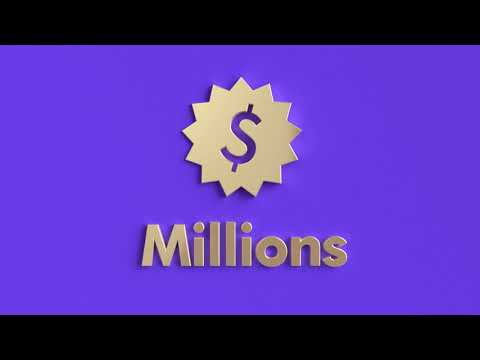 An “anonymously”-led startup called Millions has raised a $3 million seed round for its fintech company that’s currently giving away free money through its Twitter account. The concept, inspired by the likes of YouTuber David Dobrik, is partly aimed at attracting attention for the new company but is also setting the stage for a forthcoming business model of sorts, where brands could participate in giveaways more directly.

The idea of brand and cash giveaways is not a new one, of course. Outside of social media personalities and traditional sweepstakes like Publishers Clearing House, the mobile game HQ Trivia more recently had tried to integrate brand giveaways in an attempt to draw players to its live trivia games. But HQ Trivia couldn’t maintain an audience after the novelty wore off and eventually shut down, after also dealing with internal strife and tragedy.

Millions has a different idea. Instead of weekly live games, users follow the Twitter account @millions, which either does a drop of some sort or gives away money to its followers every month. This month, for example, the account is launching its “million dollar sweepstakes.” Users follow @millions on Twitter, visit Millions.app, the enter 6 numbers. If all 6 match, they win $1 million*. (See details below).

Next month, the startup will launch a game called “are you my number neighbor?” where users will enter their phone number on a website, and if it’s just a digit off from the phone number on the site, the user wins $100,000. 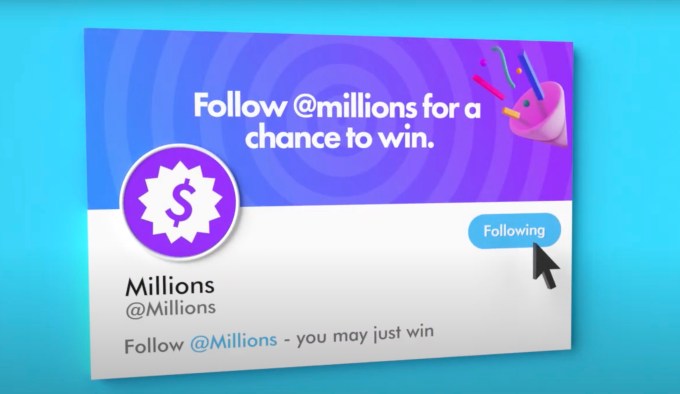 “If you think about customer acquisition costs — and this is a little bit controversial — people just give money to Facebook or Instagram, or Apple or Google. The money goes straight to a social network and not the people,” explained a Millions co-founder, who asked to remain anonymous. “They’re trying to get the people, but they’re not giving the people the money. The Millions way is really giving the people the money. We don’t need to run advertisements. We’re giving the money directly to the people, and hopefully, they follow our ecosystem, subscribe for updates, and they’ll see the future launch,” they said.

Ultimately, the larger plan for Millions is to transfer the customers it acquires through the games to the fintech play, which will also have something to do with winning money.

TechCrunch agreed to not reveal the co-founders’ name during a discussion to learn what the startup was up to, as they said they wanted to keep the game playful and anonymous for the time being. But we’re not breaking any agreements by pointing to what’s easy-to-access, publicly available data. We found the company, Mycard Inc. is referenced on the Millions website’s Terms as the legal entity behind this endeavour. That same company is on this SEC filing for a $3 million fundraise in December 2020. The filing lists two names: Kieran and Rory O’Reilly. These are the same names as the brothers behind gifs.com.

A few investors also agreed to vouch for Millions on the record, and hinted at the MyCard product to come.

“This company is creating delight from what would otherwise be the mundane, everyday necessity of swiping a credit card. We invested in Millions because they will spark joy in people’s lives, and think the traditional points model of accumulating hard-to-use airline and hotel points is tired, and ripe for reinvention,” said Allbirds co-founder and CEO Joey Zwillinger.

“Millions is building an incredibly loyal audience through an unparalleled, engaging customer experience and the $1M giveaway is only the tip of the iceberg of what’s to come. These are some of the strongest founders I know and have truly captured lightning in a bottle,” said Italic CEO Jeremy Cai.

“I invested in Millions because the trend is clear – people love winning money.It’s clear that there’s something going on here. Millions is dedicated to giving away money in crazy ways and I’m happy to be involved,” said MSCHF head of strategy and growth, Daniel Greenberg.

Millions’ arrival, however, comes at a time when people are desperate for money due to the economic downturn driven by the COVID-19 pandemic and lack of government assistance. The pandemic has exacerbated the class divide, leading people (including the Pope) to question whether capitalism has failed. It has fueled the “eat the rich” ethos behind the GameStop frenzy. And this situation has added a darker layer to otherwise do-gooder activities, like Dobrick’s stunts or Lexy Kadey’s TikTok “Venmo Challenges,” where she tips waitstaff and fast food workers hundreds or even a thousand dollars and films them breaking down in relief.

Millions’ co-founder acknowledges we’re in a time of need, but also argues that’s why the product makes sense.

“If you think about what’s going on in the world right now — with the pandemic and the 99% versus the 1% — people are looking for a) hope and b) money,” they said. “If you can combine a product that has two of those things, you’re giving people fun, excitement, and something to look forward to…I think that’s really inspiring.”

*Note: Like many sweepstakes, you’re playing for a “chance” to win. But in this case, $10,000 is a guaranteed Grand Prize win for one person. The Millions website lists the digital promotions company Realtime Media as being involved in helping manage the game. However, the insurance provider that insures the program is actually HCC.

previousBumble IPO could raise more than $1B for dating service

nextIn 2021 everyone gets 15 minutes of wealth