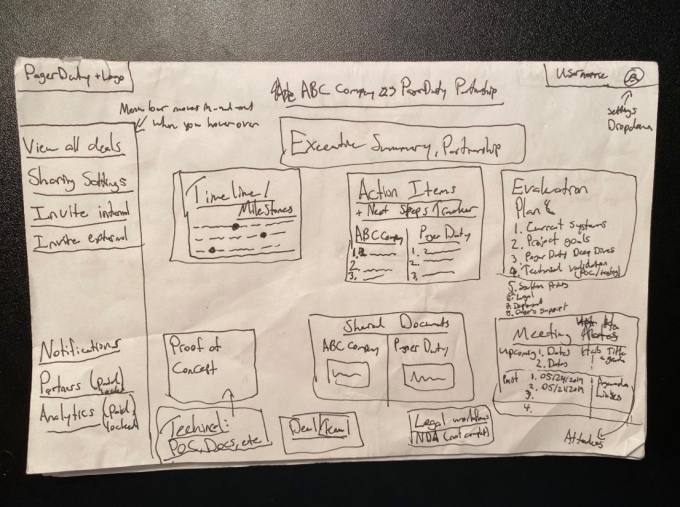 The founders of Accord, an early stage startup focused on bringing order to B2B sales, are not your typical engineer founders. Instead, the two brothers, Ross and Ryan Rich, worked as sales reps seeing the problems unique to this kind of sale first-hand.

In November 2019, they decided to leave the comfort of their high-paying jobs at Google and Stripe to launch Accord and build what they believe is a missing platform for B2B sales, one that takes into account the needs of both the sales person and the buyer.

Today the company is launching with a $6 million seed round from former employer Stripe and Y Combinator. It should be noted that the founders applied to YC after leaving their jobs, and impressed the incubator with their insight and industry experience, even though they didn’t really have a product yet. In fact, they literally drew their original idea on a piece of paper. 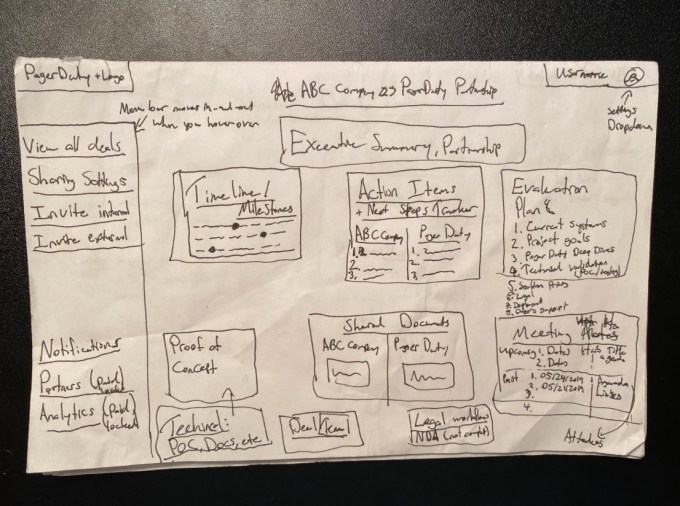 The original prototype was just a drawing of their idea. Image Credits: Accord

Recognizing they had the sales skills, but lacked programming chops, they quickly brought in a third partner, Wayne Pan to bring their idea to life. Today, they have an actual working program with paying customers. They’ve created a kind of online hub for B2B sales people and buyers to interact.

As co-founder Ross Rich points out these kinds of sales are very different from the consumer variety, often involving as many as 14 people on average on the buyer side. With so many people involved in the decision-making process, it can become unwieldy pretty quickly.

“We provide within the application shared next steps and milestones to align on and that the buyer can track asynchronously, a resource hub to avoid sorting through those hundreds of emails and threads for a single document or presentation and stakeholder management to make sure the right people are looped in at the right time,” Rich explained.

Accord also integrates with the company CRM like Salesforce to make sure all of that juicy data is being tracked properly in the sales database. At the same time, Rich says the startup wants to this platform to be a place for human interaction. Instead of an automated email or text, this provides a place where humans can actually interact with one another, and he believes that human element is important to help reduce the complexity inherent in these kinds of deals.

With $6 million in runway and a stint at Y Combinator under their belts, the founders are ready to make more concerted go-to-market push. They are currently at 9 people, mostly engineers aside from the two sales-focused founders. He figures to be bringing in some new employees this year, but doesn’t really have a sense of how many they will bring on just yet, saying that is something that they will figure out in the coming months.

As they do that, they are already thinking about being inclusive with several women on the engineering team, recognizing if they don’t start diversity early, it will be more difficult later on. “[Hiring a diverse group early] only compounds when you get to nine or 10 people and then when you’re talking to someone and they are wondering ‘do I trust this team and is that a culture where I want to work?’ He says if you want to build a diverse and inclusive workplace, you have to start making that investment early.

It’s early days for this team, but they are building a product to help B2B sales teams work more closely and effectively with customers, and with their background and understanding of the space, they seem well positioned to succeed.