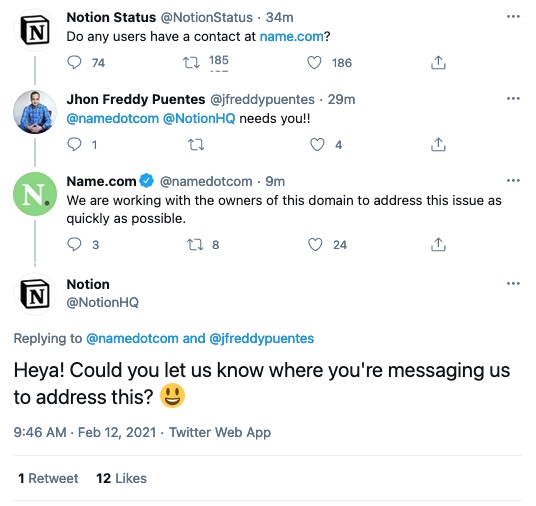 Notion, the online workspace startup that was last year valued at over $2 billion, is currently offline after a DNS outage knocked the site off the internet.

The collaborative online office and document service was not loading as of around 9am ET on Friday, preventing anyone who relies on the service from accessing their cloud-stored data.

In a since-deleted tweet, Notion asked if “any users have a contact at Name.com,” the web host that Notion relies on for its domain name. In a reply, Name.com said it was “working with the owners of this domain to address this issue as quickly as possible.” Notion replied: “Could you let us know where you’re messaging us to address this?”

In a statement shortly after its first tweet went out, Notion told TechCrunch: “We’re experiencing a DNS issue, causing the site to not resolve for many users. We are actively looking into this issue, and will update you with more information as we receive it via our status page on Twitter.”

Domain name servers, or DNS, is an important part of how the internet works. Every time you go to visit a website, your browser uses a DNS server to convert web addresses to machine-readable IP addresses to locate where a web page is located on the internet. But if a website or its DNS server is not configured correctly, it can cause the website not to load.

It’s not clear exactly who is responsible for the DNS issue. When reached, a spokesperson for Name.com did not immediately comment, and Sonic.so, the Somali-based registrar that oversees the .so country-code top level domain which Notion relies on, did not return a request for comment.

We’ll update once we know more.