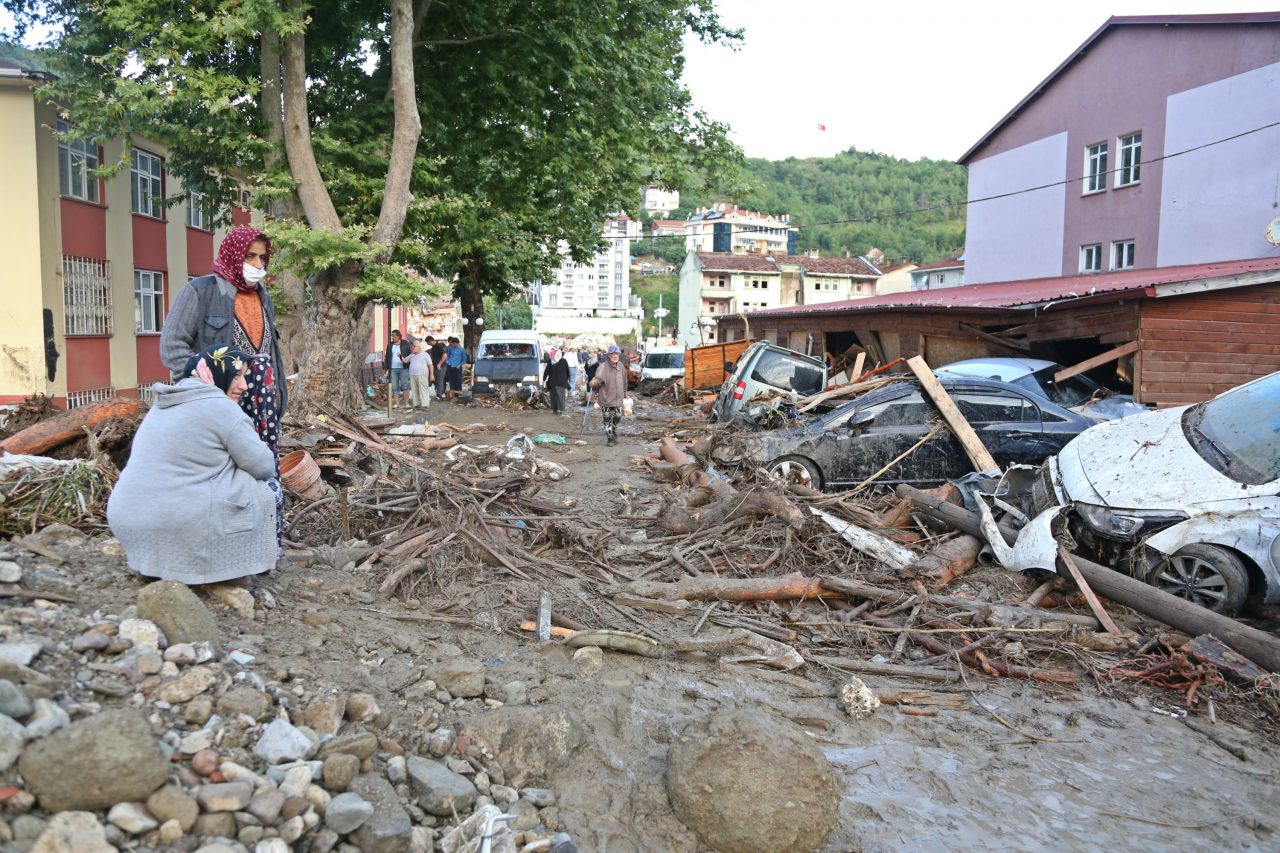 Floods claimed five lives in Kastamonu province while one person remains missing in Bartın as the Black Sea region grapples with two days of torrential rains. The flooding prompted evacuations and destroyed buildings, bridges and roads

Five people swept away by floodwaters were killed in Kastamonu province while the search is underway for another person missing in Bartın, as torrential rains triggered floods in the central Black Sea region.

Heavy rainfall late Tuesday had caused floods and landslides in an area spanning from Bartın in the west to Sinop in the east of the region prone to floods due to its climate. Rainfall sporadically continued on Wednesday and Thursday. Search and rescue crews were deployed in areas affected by floods, evacuating people stranded in their houses and cars.

The Disaster and Emergency Management Authority (AFAD) announced the casualties early Thursday and said in a statement that their crews, staff from the Turkish Armed Forces (TSK) and local search and rescue teams were working on evacuating residents and distributing aid to survivors.

Some 300 people in Bartın’s Ulus district, where an elderly woman went missing after floods tore apart her home, were evacuated.

In Kastamonu’s villages and neighborhoods, 210 people were evacuated from a region affected by floods. Helicopters airlifted stranded people who climbed up onto the roofs of buildings in the Bozkurt and Abana districts of Kastamonu on Thursday. Television footage showed some multistory buildings located next to a stream had collapsed but there was no word of any casualties. AFAD said another 106 people were airlifted in villages near Ayancık, the worst-hit district in Sinop, where the sole public hospital was inundated with floodwaters, forcing the evacuation of patients. Floods also led to power cuts in 271 villages in Kastamonu, Bartın and Sinop.

Pakize Yorulmaz, a resident of Bozkurt district, said the floodwaters were “waist-high” in her house.

“(Rescue crews) took us from home around at 3 a.m. in the night. We were very scared,” Yorulmaz told Ihlas News Agency (IHA) Thursday. She said they were outside when floodwaters started taking hold and ran home. They returned to find their house had been flooded too and had to climb up on the roof.

Gülizar Yorulmaz, another local, said they huddled together with their neighbors on the sixth floor of their apartment building. “I could see buildings across the street were being brought down by floods. People were hugging each other and crying. We thought we would be next,” she said.

Floods and landslides led to the collapse of some bridges and roads in the region. Work is underway to restore access to some villages.

Turkish Red Crescent (Kızılay) also dispatched teams to the region to help the flood victims. Some 200 volunteers delivered aid to survivors in Sinop’s Ayancık, Bartın’s Ulus and Kastamonu’s Azdavay districts. The charity sent mobile kitchens to deliver meals to people displaced by floods while food packages were also distributed to the victims.

The weather forecast showed that the torrential rains were expected to cease by late Thursday.